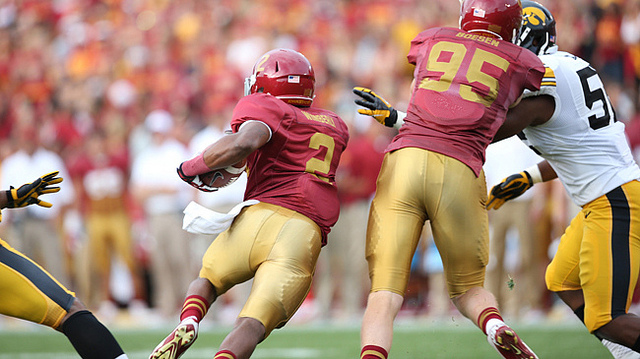 Throughout most of the summer, America was consumed by the smart phone and social media game Candy Crush. For those unfamiliar, download at your own risk; Candy Crush addiction is real. I have spent hours upon hours on this frustratingly simple piece of software. The basic parameter of the game is to connect three candies of the same color which in turn explode in order to accumulate points and "clear the jelly." Once this is done you matriculate to the next level which presents a brand new set of candies to explode. Sounds ridiculous, but this game has the potential to drive you to Bo Pelini levels of rage. You can get stuck on a level for hours, days and weeks–level 33 has caused me considerable consternation–to the point of undeniable exhaustion.

During the first two games of the 2013 season, the Iowa State offense was stuck in a Candy Crush nightmare. There was no room to run, little time to pass and seemingly no move made worked. In essence, there was all sorts of jelly in the way and the Cyclones were banging their head against it.

See, here’s the rub about Candy Crush. The game gets a whole lot easier if you stumble across a special candy. These are potent pieces which can explode layers of jelly in an instant. Once these specials strike, the entire board opens up and points are accumulated in a hurry.

After plodding along for two games, Iowa State found their special explosive candy piece in Aaron Wimberly. He busted through the jelly.

When Wimberly committed in August 2012, his only other two FBS offers were from Troy and Charlotte. (Yes, Charlotte has a football team. But they aren’t FBS bowl eligible until 2015. News to me as well.) Wimberly was good as a freshman at Iowa Western, running for just under 900 yards, but the big boys weren’t offering yet. Enter Paul Rhoads. Rhoads and his staff do a brilliant job of finding under-the-radar guys and offer them before they pop on the national scene. It’s the game they have to play when recruiting in the Big 12. The Cyclones don’t have the wait and see luxury like the power programs. Wimberly had a monster Sophomore year at Iowa Western and piled up the offers: Boise State, Iowa, Penn State and TCU all came calling. Luckily, Iowa State had the pre-existing relationship and Wimberly stayed with his word and became a Cyclone.

Wimberly ran for 137 yards on 19 carries against Tulsa. It was the most yardage by a Cyclone tail-back since James White had 138 yards in a win at Texas Tech in October, 2011. Wimberly also added a 31 yard reception that illustrated his dynamic ability out of the slot. The speedster has, as Dan McCarney would say, "the juice." When he is on the field, people react and pieces get moved. He has the "hold your breath" quality whenever he touches the ball.

It was his play in special teams that turned the game around. After a Tulsa touchdown gave them a 14-7 lead  with 1:40 on the clock, the Cyclones were in need of a Candy Crush special piece. Wimberly busted the jelly down the right sideline for a 32 yard kick return to put the Cyclones in a good starting spot for the two minute drive. Paul Rhoads said in the post-game if not for the strong return, they would have likely avoided a turnover disaster and ran the clock out. Eight plays and a minute later, the Cyclones had tied the game.

Courtney Messingham was seeking some "ESPN" plays from his skill guys; Wimberly delivered. He just need a few more touches to bust the jelly.

It is still early, but even with a banged up line, Wimberly is averaging a very good 6.4 yards per carry–only two tail-backs in the Big 12 are averaging more and they both line up for the Baylor bonanza.

Offense, like Candy Crush, can be a frustrating exercise. But with a few special pieces, everyone’s job gets easier. Aaron Wimberly exploded onto the scene on Thursday night. Iowa State found its jelly buster.