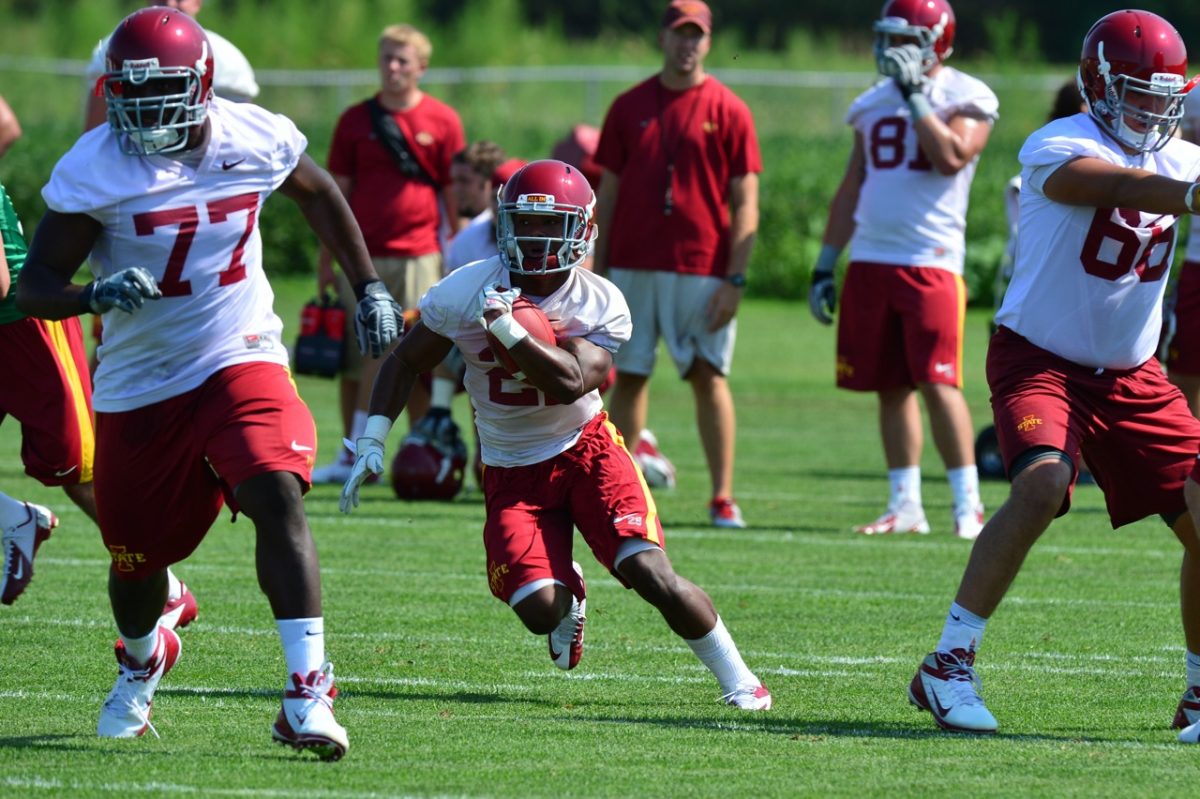 AMES – This winter, Shontrelle Johnson didn’t know if he was ever going to play football again.

On Saturday, he steamrolled the Tulsa Golden Hurricanes, helping Iowa State to an impressive 38-23 win.

“It was a good feeling,” Johnson said. “You guys have heard the story before. I wasn’t 100 percent sure if I would be able to play again.

“It felt good to be out with my boys again today.”

Last season, Johnson was injured during a game against Texas. After neck surgery, his football future was in serious doubt.

Thankfully for the Cyclones, Johnson never gave up. The junior continued to work and rehab. When was cleared to lift weights in the spring, he added 10 pounds of muscle.

It showed on Saturday.

“Once that first hit was out of the way, I was good to go pretty much,” Johnson said.

The DeLand Fla., native gashed the Golden Hurricanes for 120 yards, and was especially impressive after halftime.

With Iowa State leading 24-16, Johnson helped spark another Cyclones touchdown march. On the first three plays of the scoring drive, he piled up 29 yards.

Later, Johnson racked up 37 more to flip field possession and keep the Tulsa offense backed up.

Fittingly, the junior sealed the Iowa State victory with a touchdown run from the 5-yard line to push the Cyclones’ lead to the final 38-23 margin.

“I didn’t touch the paint last year so it felt pretty good,” Johnson said. “I had to be patient and wait for it. Thank god it came. It was a big relief. I can go out and play and not have to worry about scoring now.”

“Shontrelle Johnson is a guy that is always positive,” linebacker Jeremiah George said. “With not knowing if he was going to come back and play this year, he trained so hard. He trained harder than a lot of people I know that would be in that situation.

“He told me that every time he got a chance to run the ball, he was going to run as hard as he could. Because of the injury that he suffered last year, he realized this is a once in a lifetime opportunity and he wanted to make the most of it. That’s how I try to go out and play my game.”

Johnson’s presence should be a big lift both on and off the field for the Cyclones this season.

Arceo does the job

On Tuesday, Edwin Arceo found out he won the starting kicking job. Saturday, he kicked in front of 54,931 Iowa State fans.

“I just take my steps, look at the field goal, and keep my head down,” Arceo said.

So far, so good. In his debut, Arceo connected on all his PAT tries and drilled a 30-yard field goal before halftime.

“I just went there and tried to help our team get three points,” he said.

The junior college transfer battled with freshman Cole Netten all fall for the starting nod. Arceo earned it with his steady performance, and now Iowa State plans to redshirt Netten.

“Coming into camp, Coach Rhoads said that we’d be competing for a spot,” Arceo said. “That’s what I did.”

Josh Lenz is a very smart football player. Need proof? He talks just like a coach.

The senior scored Iowa State’s first touchdown of the season on a 43-yard strike from Steele Jantz.

“We knew with the dig that we had on the inside that the safety was going to jump down,” Lenz said. “I just had to cross the face of the corner and run it out flat. Steele put a good ball out there and we executed like we want too.”

The touchdown gave the Cyclones an early 7-0 lead. Lenz finished with a team-high eight catches for 96 yards, including the long TD catch.

“It always good to hear plays that you have been running all week in practice to take a shot,” he said. “When they finally call it in a game you’re like, ‘Here we go.’”

Paul Rhoads on Deon Broomfield, who took a 4th quarter interception 51 yards down the sideline to help seal the Iowa State win.

“Just what I needed. A guy that wants to be a punt returner and a kick returner makes a play with the ball in his hands. I’ll have to talk that down for the next 48 hours." 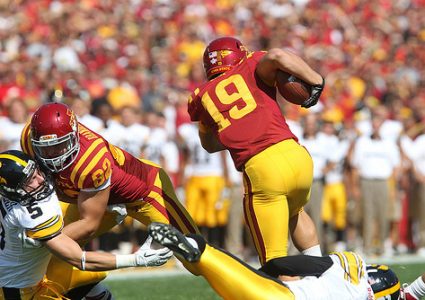