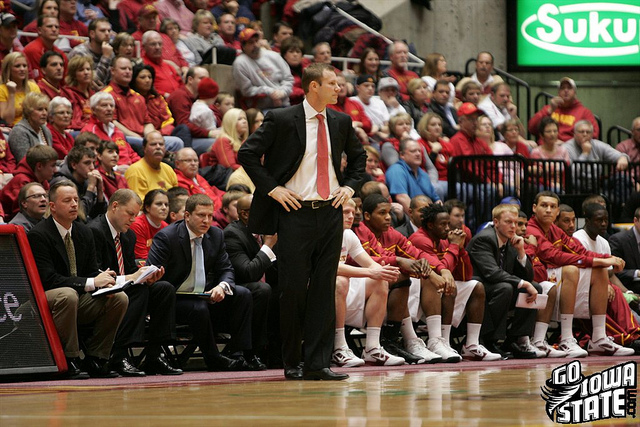 As it says so succinctly in the theme song to the old sitcom Welcome Back Kotter :  "The names have all changed since you hung around, but those dreams have remained and they’ve turned around. Welcome back."

It’s been a long seven years but the Cyclones are back in the Big Dance.

(Side note: I’ve never actually seen Welcome Back Kotter, my first introduction to that song was the rapper Ma$e’s version back in 2004. I’m still waiting for Ma$e to come back again – apparently America didn’t need him back.)

Iowa State has been to seven bowl games in the past 12 years and yet just three NCAA tournaments. Who would’ve ever guessed that when the century turned?

It has been quite the journey since Iowa State played North Carolina in the 2005 NCAA tournament. A very rocky journey.

But what a turnaround.

Just think where Iowa State basketball stood just two years ago. The Cyclones were nursing a bitter feeling after a promising 2009-2010 campaign came crashing down.

I was in the lobby of the Westin in Kansas City on March 11, 2010 when the bad news got worse. The Cyclones  were still stinging from a loss to Texas in the opening round of the Big 12 Tournament and there was no post-season on the horizon. It was announced after the game that Craig Brackins would be declaring for the NBA Draft. Marquis Gilstrap was denied an extra year of eligibility and was forced to turn pro. And to tops things off, Justin Hamilton and Dominique Buckley would be transferring out of the program.

It was a quadruple whammy for a basketball program that was already too accustomed to bad news.

The Cyclones were down to Diante Garrett, Scott Christopherson, an injured Jamie Vanderbeken, walk-on Bubu Palo and problem-riddled LaRon Dendy, Charles Boozer and Chris Colvin. Reaching an NCAA tournament in the near future was the furthest thing from anyone’s mind.

Fast forward a regime change, an influx of players and two years later, and the Cyclones are battling the defending National Champions in a winnable opening round NCAA tournament game.

It’s not quite the storyline for a Hollywood blockbuster, but a remarkable reversal regardless.

The 2012 NCAA tournament is a catharsis of sorts for the Cyclone Nation. It is a nice coincidence how the last 12 years of Cyclone basketball are pleasantly colliding in the same madness:

Larry Eustachy has his life on track and returns to the dance with his Southern Miss squad. It is Eustachy’s first NCAA appearance since the Hampton horror in 2001.

Greg McDermott gets his Creighton team into the dance in his second year at the helm, with his All-American son riding shotgun.

Harrison Barnes is in a big-time spotlight and his North Carolina Tar-Heels have a legitimate chance to win a National Title like he so desired during Skype-gate.

Cyclone transfers Wes Eikmeier (Colorado State) and Clinton Mann (Davidson) are solid contributors and perfect fits for their respective programs. The same can be said for Jordan Dykstra (South Dakota State) who committed to Greg McDermott as a ninth grader before realizing he was best suited for non-BCS play. All will be dancing this weekend.

In the past some Cyclone fans would be resentful and virulent to the success of those listed above. But not this year. It’s like a giant Cyclone Nation group therapy session.

As the old adage goes, "One must embrace pain and burn as it is fuel for the journey."

No hard feelings. Now there are games to be played.

All week long the matchups and strategy against the young, talented Connecticut Huskies have been tossed around. Can Chris Babb shut-down Jeremy Lamb? Can the Cyclone guards stay in front of Napier and Boatright? Can Andre Drummond keep up with Royce White? Should Jordan Railey grow an Anthony Davis style unibrow to intimidate the UConn posts? (The last one is made-up, although the thought has crossed my mind.)

That’s the joy of being in the NCAA tournament. There is an extra level of eagerness and anticipation. As each hour ticks closer to tip-time, the nervous energy multiplies. Each minute feels seven years in the making.

And then the time finally comes when CBS’ Greg Gumbel bellows, "We now take you live to Louisville, Kentucky where Verne Lundquist and Bill Raftery have the call as the defending national champion UConn Huskies meet the upstart Iowa State Cyclones…."

Enjoy the moment. Take a minute to soak it all in.

The Cyclones have the nation’s eyes back on them again. Win or lose, Fred Hoiberg has returned this group to the biggest dance party of the year. Those dreams have turned around.

Welcome back Cyclones.  You might as well stay awhile.