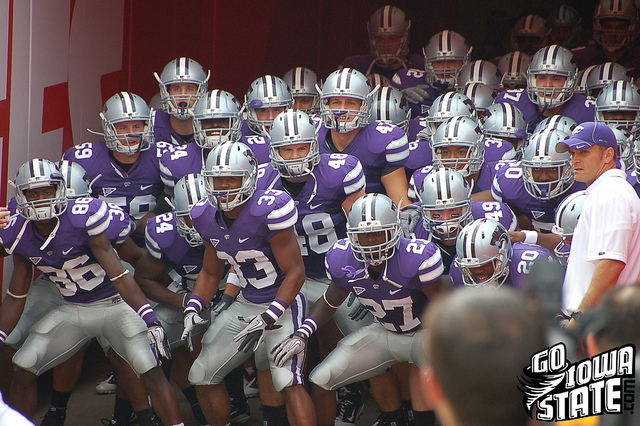 Collin Klein – It is no secret that quarterback Collin Klein is what makes Kansas State’s offense go.  Iowa State has to get pressure on him in the pass game and will most likely stack the box on early downs.  I am not sold on Collin Klein’s ability to throw the football. He is a glorified Wildcat quarterback. We will see a lot more of senior linebacker Matt Tau’fo’ou this weekend as this offense will be treated much like a power run team. In the pass game, the defensive line will have stay in their gaps and keep Klein in the pocket because he is at his best when on the move.

Protect the Ball – Early turnovers with great field position killed the momentum of drives last week against Oklahoma. I understand that with this offense, there will be turnovers but they can’t happen at mid-field. A team like Kansas State that is ranked seventh in the country in takeaways will capitalize on them. It has almost come down to a sure thing for this team. If they turn the ball, they will lose. However, having played this game I know that is not easy at all times to do this. Iowa State will make mistakes on offense. Hopefully those mistakes don’t result in turnovers.

Wide Receivers/QB – The Jekyll and Hyde show continues…Throwing and catching the ball.  Oklahoma State wasn’t a perfect example of this but toward the end of game at pivotal times, you had that gut feeling we would make a play. I did not have that same feeling last weekend against OU and that was partially due to the pressure on Jared Barnett but mainly because we couldn’t get off of man-to-man coverage. If we want to win this week, our receivers have got to win in man coverage and the ball has got to be thrown on time with great placement.  I know that sounds pretty obvious but man coverage is not too complex. It comes down to the simple fact of timing and ball placement.

Nothing to Lose – I love the spot the Cyclones are in right now. They can play the roll of the spoiler once again this season. Kansas State is looking to get their first 10 win season since 2003.  That is a very important milestone that not too many teams get an opportunity to reach. We can literally throw the kitchen sink at them. It’s the last regular season game of the year. Iowa State has nothing to lose!  These kids are going to come out with this mentality.  It reminds of Coach McCarney’s old saying of, “Why not Iowa State!?” No one besides the Cyclone Nation thinks that Iowa State can win this game and the guys thrive off of that.

Defense – If the Cyclones can be rested and continue to get off the field on third downs, we can win this game. Their effort and execution has been outstanding the last month. They are the reason this team is able to perform at a high level. Not taking anything away from the offense, but this defense is the real deal and in my opinion, the best one I’ve seen ever since I have been around (2005 defense was great as well). Barring overtime in the Oklahoma State game,  the Cyclones are holding opponents (in regulation) to less than 17 points in the last four games. That is very impressive having played offenses such as Texas Tech, Oklahoma, and Oklahoma State.