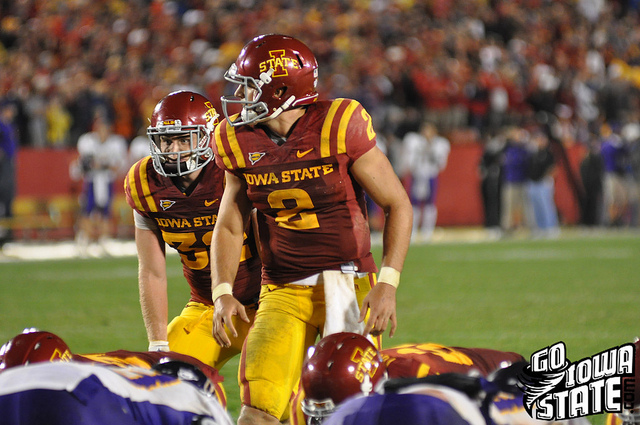 1 – Turnovers – Iowa State must protect the ball in this contest. This isn’t UConn, a team that has an ineffective offense. Texas’ offense is much improved and giving the Longhorns extra chances to score is definitely not something the Cyclones can afford to do. If Steele Jantz and the rest of that offensive unit can manage the game and take what is given to them, they will be successful.  Forcing the issue and bad decisions will get us beat against the 17th-ranked team in the country.

2 – Establish the run – This key will always be one that is imminent if Iowa State is to come out the victors.  Both of these teams will look to establish the run early and often. Expect the Cyclones to play all four running backs Saturday and look to change up the tempo of the game and keep Texas off balance.  A lot of emphasis in a jet tempo offense is repeatedly stretching the defense horizontally and then attacking it vertically with the pass or a gadget play.  So in theory, the Cyclones attack will aim to wear out the UT defense side-to-side and then take shots downfield.

3 – Defensive consistency – The Iowa State defense has been a pleasant surprise to me and most of the fan base so far this season. The spots that were question marks at the beginning of the season (FS, DL) are arguably playing the best of any defensive part. Jacques Washington is coming into his own as a free safety and the defensive line is about 7 or 8 deep. They’ve played with great speed and gap control. There is no secret that the strength of our defense is at linebacker. Knott, Klein and the emergence of Matt Tau’fo’ou as a playmaker in the front 7 has been critical. This will be Iowa State’s first test of real speed and it will be interesting to see how we contain it. It will be important for the defense to get pressure on the inexperienced quarterback’s for Texas and contain freshman running back Malcolm Brown. Bottom line, if the defense can cause havoc and play with grit and determination like they did last year, there will be an excitement about I-State football that hasn’t been around in awhile.

4 – Big plays – In a game like this weekend’s, there will be definite ups and downs for the Cyclones.  Iowa State must be the team that weathers the storm and must make the big plays when they are there to make.  Also, I am still confident in a big return by Josh Lenz in the near future as a game changer.  As I think back to last year’s game, a few big plays fueled that contest and gave us the edge: Jake McDonough’s recovery of a fumble at a crucial time, Josh Lenz’s touchdown catch in the third quarter and the exclamation mark of A-Rob’s touchdown run in the fourth quarter. All memories aside, the Cyclones must win the big play battle and be the aggressor of this football game.

5 – Environment – Iowa State comes into this game as a 10-point underdog. What that means to a average sports fan, is that if these two teams played on a neutral field Texas, would be a two touchdown favorite.  In the words of college football analyst Lee Corso “not so fast, my friend!”  That is ridiculous. With neither team changing much from last year, I don’t see Texas being much better. Jack Trice Stadium will be rocking on Saturday and after a bye week, the anticipation of a night game on national TV will have Cyclone fans more wound up than ever. I think that a key factor to this game is how Texas, arguably the youngest team in the NCAA, handles a loud stadium.  They previously won at the Rose Bowl, but let’s be honest; UCLA football is by no means a program on the rise. I know the Iowa State faithful will bring their A-game to tailgating and packing the Jack. The players have to do the same and give it up for this incredible fan base!