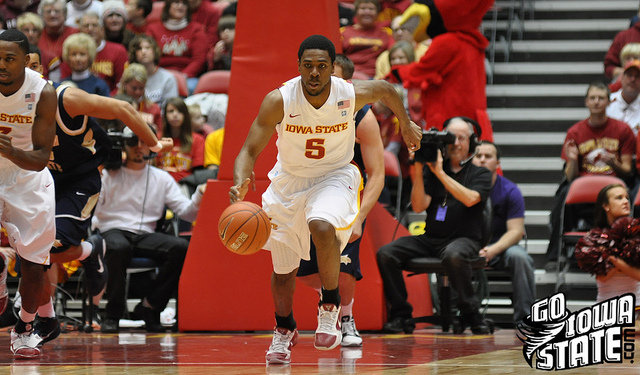 I know it sounds cliché—ESPN uses it seemingly every other week for crying out loud—but it’s true.  The Iowa State men’s basketball team will learn a whole lot about itself this week as they embark on their first true road game at Northern Iowa and host a topsy-turvy Cal squad on Saturday.

Northern Iowa lost most of the core of their production from last year’s Sweet 16 team that sent the Jayhawks and Bill Self home earlier than planned.  Returning to Cedar Falls is a slew of young guys with veterans Lucas O’Rear, Kwadzo Ahelegbe, Johnny Moran and Kerwin Dunham.  Talented guards Anthony James and Marc Sonnen teamed with younger brother and carbon copy of Adam Koch, Jake Koch.

Northern Iowa is only 2-2, but one loss came at the hands of Syracuse and the other to a mediocre Wisconsin-Milwaukee team.  UNI is a dangerous team in the McLeod Center make no mistake about it.  If the Cyclones leave Cedar Falls tomorrow night with a win, look out.  Beating Cal at home is very possible.  At that point, ISU would need to beat the rest of the no-name teams (including Northern Illinois) and win at Iowa and at Virginia to make it unscathed through the non-conference portion of the schedule.  I by no means expect that, but that scenario isn’t all that farfetched.

In reality, if ISU goes 2-2 through the four games of at UNI, Cal, at Iowa, and at Virginia things will be looking far brighter than anyone could have envisioned.

I follow Ken Pomeroy’s site way too closely (www.kenpom.com) and it has been interesting to track the progression of Iowa State’s ratings thus far.  Starting in the preseason somewhere around 170, ISU is now rated 65th.  Originally predicted to win two games cumulatively and zero individually, ISU is now predicted to win six cumulatively and five individually.  (Note:  Cumulative and individual win totals differ because the cumulative is for the entire conference season and not just game to game probabilities.)

The other most interesting note from his site is the explanation for why Iowa State has been successful thus far.  Looking at the “Four Factors” ratings (listed in order of calculated weighted importance offensively and defensively on his site) Iowa State has the 17thbest “Effective FG Percentage” on offense and 13thbest on defense.  Also, on offense, ISU is 13thbest in the nation in “Turnover Percentage” (second most important contributing stat of the “Four Factors” to Effective FG Percentage).

That in a nutshell explains the early success.  The question going forward is; how much will the elevated competition affect the ability of the ISU offense to make shots and defense to force misses out of opponents?  As mentioned, this week will be the start of making that judgment.

For the previous two years Jon Miller and Steve Deace have put together their All Cy-Hawk team before the season begins.  This year, a buddy (Iowa fan) and I did the same when we began discussing their selections.  In July our team looked like this:

A list that Iowa certainly dominated.  Today, we put a post-season version of this team together to compare and contrast with the changes that were made.

Here were the changes:

P Donahue, but in a much closer race than anticipated

RB Adam Robinson (Iowa), in another tight race…very much a tossup

K   Neither team deserves to supply the kicker, go for two point conversions and never kick a field goal

“Don’t cry because it’s over, smile because it happened.”

The 2010 Iowa State football season is now officially over.  It seems like it was just yesterday that I was cutting out of work early in order to get to the grass lots to tailgate for the home opener with Northern Illinois.  The older I get, the faster these seasons are over.

As I was pulling away from Jack Trice Stadium for the final time this season, John Walters said something that caught my attention.  He phrased the season as “successful”.  I flinched and I winced.  I have long stood by the rule that any BCS team should aim to make a bowl game every year as its goal.  Six wins is not too much to ask.

So I scoured for data to back up the claim that John Walters made and I learned an important lesson.  Never doubt the Godfather.  I (with the help of “isuaggie”) found three separate strength of schedule (SOS) rankings (RPI, Live from the Press box, and GBE Ratings).  Iowa State’s SOS was eighth, fourth, and sixth respectively.  I then assigned points for each ranking in NCAA FBS by giving the most difficult schedule 120 points and descended to 1 for the easiest schedule.  I then took each team’s winning percentage thus far and multiplied it by that assigned point value.

The results:  Using the RPI ranking ISU came out 33rdin the nation, 30thin the press box rankings, and 28thin the GBE ratings.

So basically, when accounting for winning percentage and SOS, Iowa State was a top 33 team from these three sources.  Not a bowl game, but not bad.

Outside the men’s room: The rivalry