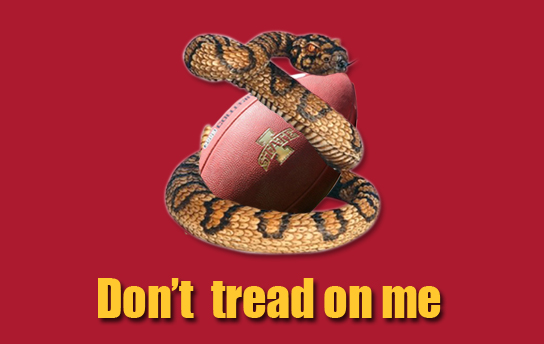 A phrase that has deep American origins that you can read about here and has also recently been adopted by the United States Men’s Soccer National Team seems to be quite fitting for our Cyclone football program.  It is a slogan that I translate as “don’t pity me, I’m not your doormat”.  One could even say that there are very similar histories between the two programs.  Both have had some moments of greatness in the past with mostly underwhelming results, a lack of tradition and a recent ascension to respectability.

For the US Soccer team, there were no moral victories for winning their group and advancing only to lose to Ghana in the 2010 World Cup round of 16.  For Iowa State, there is no moral victory for almost beating #9 Nebraska.  We’ve probably all been through difficult events in our life where we are looked at with sad faces and pitiful eyes.  I know I have and I don’t need pity or moral victories.  I feel the football program must feel the same way, at least a little bit.  Some will say Iowa State should take solace in a moral victory and just be happy to be there.  Not this team, not this administration and not this football coach.  Happy to be there kicks the extra point and goes on their merry way to see what happens in the next overtime.

That isn’t to say that I’m not immensely proud of the representatives of my school, because I am.  I am proud of them because they so embody this quote from Coach Rhoads after winning the Insight Bowl last season:

I’m also not going to lie to you and say that I saw the fake extra point coming or that I would even have the stones to make that call. I clearly don’t.  While some talk about the message that they perceive to have been sent by Coach Rhoads to his team that he didn’t have faith in the offense or defense to win it, I think they are completely missing the point.  He played to win.  Three yards with the game on the line.  The speculation of the coaching tactics that unfolded is a different matter.

Why the backup punter?

The backup punter is the holder.  The same holder that ran the option to great success on a fake earlier in the year.  My thoughts are that you have the best holder as your full time holder to optimize your kicking opportunities 99 percent of the time when you aren’t running a fake.  Obviously you can’t throw Arnaud, Tiller, or Capello out there, which would tip the hand a little bit.

Why into the wind?

I actually don’t think the wind was the problem.  It was a poor throw.  Is the wind more likely to affect a spiral or a wounded duck?  Had a decent throw been made the wind wouldn’t have affected it at all.  As it stands I’m not sure the wind did anyway.  To me, it looked like he saw how open Franklin was and didn’t want to miss him so he lobbed it out there without seeing the Nebraska defender in pursuit.

Why not send the offense out?

Sending the offense out instead has always been a point of second guess when a coach decides to run a fake.  The question is:  Do you gain enough of an advantage with the element of surprise that it outweighs any advantage your offense has?  The staff saw Nebraska in their “field goal block” setup all day and saw that the play would be there.  That alone is enough for me, but the estimation of what is gained by the element of surprise is subjective enough that I’m okay with the decision that was made.

Why not go for it on your own 20-yard line with three timeouts and the wind at your back with 40 seconds left in regulation?

Sitting on the ball was the right call at the end of the game.  Had the ball been spotted at the 30 or 35-yard line making something happen on offense would’ve been more expected.  That said I can understand the thought process of trying a running play to see if it pops loose and go from there.  My reasoning is summed up like this, though:  The offense already had three turnovers on the day, do you really want to risk losing the game to setup a potential FG for a kicker that was only 1/3 on the day (with the wind at the back on all three of the previous attempts) that deep in your own territory?  I don’t.

My philosophical point of the day to help rationalize the loss and ease my pain:  If there were no heartbreak could there be joyfulness?  Without debilitating losses can there be thrilling victories?  It’s all relative.  The heartbreak is almost a necessary evil that must be suffered before reaching the pinnacle.

It took the Kansas fans applauding the Nebraska team leaving the field after losing 76-39 in Lawrence in 2007 to realize why every other school views the Husker fans as condescending for making that “classy gesture” after every home game.

Maybe it’s my irrational hatred of hand gestures in the first place but there is nothing dumber than the black shirt crap over in Lincoln.  Nebraska, you have a fine defense and an even better passing defense.  Your passing defense is fourth in the country, yet you somehow gave up over 200 yards to Iowa State through the air.  You also gave up 360 yards of total offense and your rush defense is ranked 73rdin the NCAA.

So, forgive me if I think you look a little bit silly for “throwing your arms up” (as one shirt read that I saw on Saturday) at any time or even after a defensive stop.  It’s a condescending gesture that only makes you appear to be lacking more intelligence than previously thought.

To belabor the condescension point further, can you help me complete this circle?

“It’s better to be thought a fool and keep your mouth closed than open it and remove all doubt.”

It was a little bit surreal to see Fred Hoiberg back in action in Hilton for ISU in last Friday’s exhibition win over Dubuque.  The last time he was more than a spectator or a scout in Hilton was on his senior day in a tough loss to Oklahoma in 1995. (I should note that I had originally and inadvertently remembered his senior day being against Colorado the week before where he torched the Buffs for 41 points…that would’ve been much cooler for this blog.)  This time he was running the show from the sidelines.  Only, there wasn’t much “show to be ran” as he didn’t bark out instructions from the sideline on every possession.  He just let the players play and take advantage of the obvious talent gap over the Spartans.  (No, that in no way is a shot at Greg McDermott’s coaching style.)

I could try to breakdown the skill sets and hypothesize on the season in front of us, but I don’t have enough sampling of their abilities to be comfortable with doing that.  Instead, I want to lay out what I perceive to be a successful season.

If all of those things happen the fans should be ready to rock as the program builds and this year’s record would be in the neighborhood of 15-17 (3-13) going in to the Big 12 Tournament.  A tall order indeed for a team with only three returning players from last season (only two that played due to Vanderbeken’s injury).  We’ll find out together if the Mayor can reignite the magic.