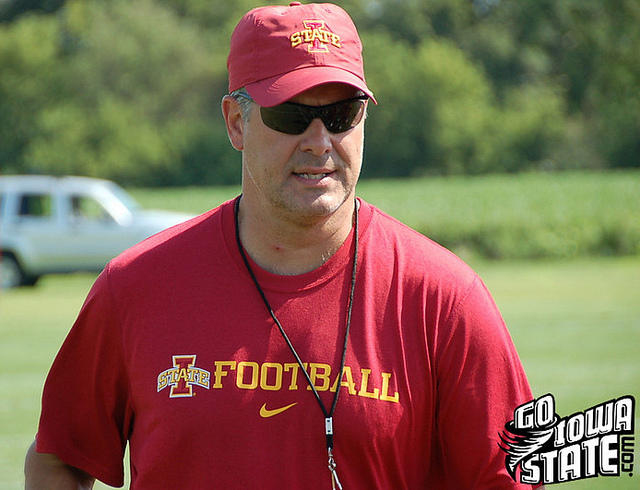 As he does every Monday during the football season, Iowa State head coach Paul Rhoads participated in the Big 12’s teleconference yesterday. Here is a transcript of the interview.

What was camp like for you guys after the flood?

PR: It was pretty normal. We got through one unique day where we missed meetings and we missed a walk-thru due to sandbagging and the flood as it approached our facility. After that, we were back on a normal schedule. We had to take cold showers for about a week and a half because we didn’t have any steam coming to our football facility. We had to change practice fields but we didn’t miss a beat.

How does that affect your team moving forward?

PR: Any time that you have a natural disaster like that, you get a greater appreciation for coming together and community. I think that the kids got their eyes opened a little bit and have a greater appreciate for the hard knocks of life.

Last year heading into the season, the talk seemed to all be about the high profile quarterbacks in the league. Those guys are gone and now, Austen Arnaud is one of the experienced guys. Talk about him and the league’s quarterbacks in general.

PR: From a competitor’s standpoint, I am a little excited that we don’t have all of those high profile guys to worry and lose sleep over. I think that when you talk about Austen, the first thing that comes to mind is leadership. He is a two-time elected captain by his teammates, which speaks very highly of what he does year round with this football program. He is a guy who finally going into his senior year, has been able to get comfortable with an offense for the second year, with a teacher in Tom Herman giving him the same verbiage. I think that mechanically, he has improved himself. I don’t want to say dramatically but he has made great changes in his mechanics and his fundamentals. He is a coach on the field. He has a great understanding of what it is we are trying to accomplish. I think that he is poised to execute and do that this fall.

You have one of the toughest openers in the conference this week. Do you like playing a tougher team first like Northern Illinois?

PR: I think that we have a very challenging opener. When these schedules are done, who is to say who is going to be real good or who is going to be coming off of this kind of season or that kind of season? We are always going to play the first game as it arrives. This year, we are facing a team who is predicted by most to win the MAC conference and deservedly so. They are a very good football team. Jerry Kill has done an outstanding job with that program going into his third year. We will have our hands plenty full on Thursday night.

Has the fact that you have one of the toughest schedules in America help motivate your team a little bit more during the offseason?

PR: I think that it helps motivate them. I don’t think that anybody is rolling up and looking away from it. We know what the challenge is and yes, most people do rate it as the toughest schedule in division one football. We have four teams in the top 10 and a bunch more knocking on the door. A number of those games are on the road. They embrace it. They look at it as an opportunity. They look at it as a positive challenge and I wouldn’t expect anything else from our kids.