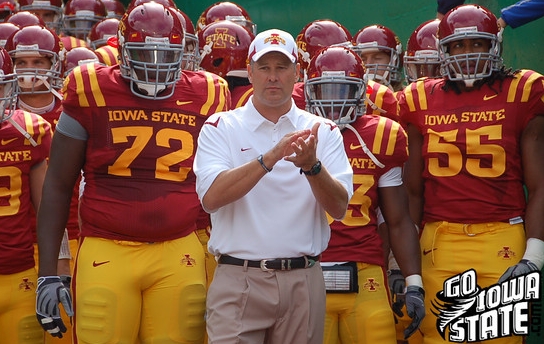 In the game of conference realignment, winning and losing for Iowa State was not separated by whether or not the current situation is now better than the previous, but if the current situation is not worse than the previous situation and style points are of no consideration.  Iowa State was probably never going to end up in the MAC or Conference USA—despite the pure joy that would’ve brought to some Iowa fans and apparently some media members as well. But they surely could’ve ended up in a lesser situation than the “old” Big 12.

The “new” Big 12 that has unfolded is a win for the Cyclones (no matter how much I, or anybody else, wanted to give Texas the proverbial middle finger and take our chances elsewhere).  It might not taste like it now and it may be anti-climactic but at the end of the day ISU is in no worse of a situation than before and that’s a good thing.  The extra revenue will be of benefit to ISU and an extra $7-10 million per year will make a much greater difference for the Cyclones than the Longhorns—no matter how much wider the revenue gap may be.

Texas has, or is close to, reaching “terminal revenue” (yeah, I just made that up) (similar to terminal velocity, which is defined as the velocity when a falling object is no longer accelerating—meaning that the earth’s gravity can no longer cause the object to speed up) and the impact of their dollars is lessening.  The point being is that Texas is essentially already outspending schools like ISU by such a wide margin that the extra money isn’t going to greatly impact Iowa State negatively because they don’t have much else to do with that money.

It is a win for ISU and goes in the w-column as such, no matter how unsexy it was.  Sure, if the schedule switches to a true round-robin it will be more difficult to reach bowl games, but are Texas Tech, Texas A&M, and Oklahoma State really the insurmountable powers some are making them out to be?  I’d say no.

ISU football in the past 10 years has had success by beating the lesser teams such as Kansas, Baylor, and Nebraska, Colorado, and Kansas State in their down years.  Is there a need to pull off a landmark upset (more so than the Nebraska game from 2009)?  You bet.  But the football program can be successful in its current state by beating the teams it should beat.  Clearly though, Paul Rhoads and company have much higher aspirations than that and it is time the great Cyclone fans follow their lead.

The equation for success at ISU is still the same; do more with less.  Nothing has changed there.  Every other conference school still has more money—except for Baylor, potentially—and more resources coupled often with more tradition and more attractive campuses to recruit to.

This was never more apparent than early in Pollard’s tenure when he made comments that ruffled the feathers of Cyclone fans that misunderstood and Hawkeye fans that had false hopes.  When he essentially said, “If Cyclone fans want to run with the ‘big boys’ they need to spend like the fans of the ‘big boys’.  Otherwise we should just join the Iowa Conference.”

If the events of the past few weeks have not scared you straight into realizing the truth of that statement, I don’t know what will.  We’ve all had those moments in our lives.  The close calls where we were somehow graced with a second chance.  Maybe it was skipping out on studying for an exam by hitting up the bars with your buddies, only to stumble home at 2 a.m. and barely make it to that 8 a.m. exam, then to find out upon arrival that the exam was cancelled due to extenuating circumstances.  My bet is the next time a test rolled around you made a better decision.  If you didn’t then you simply deserved the consequences.

The next time Iowa State has a game to decide the divisional champion (or whatever it would be in the future with the new conference schedule) at home over Thanksgiving weekend, maybe the masses will rationalize reasons to go, instead of reasons to stay home.  Maybe the masses will not allow the cold and rainy weather to persuade them into resting in their cozy recliner.

Maybe the masses will forget the past defeats and bring a new aura to a sold-out stadium.  Maybe the power of positive thought by 55,000 screaming fans that expects to win, instead of lose, have more sway than we have ever thought or realized.  In fact, we know this formula works with 14,000 plus nestled inside Hilton Coliseum.  It is time to shift the paradigm, change expectations and forge a new beginning to Cyclone athletics.  We have control of our attitude and our choices.  That is something Texas can’t do a damn thing about, no matter how much more money they have.

Outside the men’s room: The rivalry

Outside the men’s room: It’s time to move on