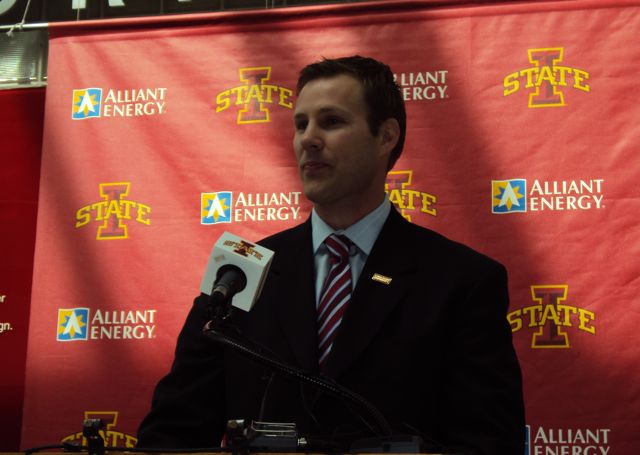 Iowa State has a new head basketball coach. Cyclone legend Fred Hoiberg is that man. After this morning’s press conference, CycloneFanatic.com was all over Ames gathering reaction. Here’s an exclusive Q&A session with Eric Heft from the Cyclone Radio Network.

CF: When I watched this, I couldn’t help but compared Fred Hoiberg to Paul Rhoads. Is that accurate?

EH: Without question. In fact, they held it in the same venue to start with. The two guys came home to take on a job, where they grew up. It is a job that both really coveted for a long time. This makes for a great fit. We’ve seen the success that Paul has had. I really think that the enthusiasm Fred has for this and the intelligence like Paul. I think he’ll find a way to make it happen.

CF: Today makes me feel like I am 11-years old again. What is it like for you to see Fred Hoiberg be named the next head basketball coach at Iowa State?

EH: In the case of Fred, it has been a lifelong desire of his for him to come back and get this. To see somebody who you like and respect get that opportunity, everybody feels great for him. Ames, Des Moines, the entire state, respects Fred Hoiberg as a person, a player and as a coach.

CF: You’ve experienced Hilton Magic about as much as anybody over the years. Fred talked a lot about bringing it back. Does Hilton Magic stem from the fans, the team, or both and what are your expectations for next year?

EH: One feeds on the other. One starves on the other. If the fans aren’t there, it certainly hurts the players. But if the players don’t produce, the fans aren’t going to. Once you have success and once you beat somebody that is a respected opponent or a big rival and that starts to grow. It is cumulative over time. It is something that gradually builds. He is going to start at a much higher point than any coach we have ever had coming in here. That’s because of who he is.

CF: Fred mentioned Diante Garrett a lot today. Do you think if he frees Diante up a little bit, we might see a different type of player emerge?

EH: I have read our fans kind of bag on Diante and I don’t get it. I think that Diante has really improved over the course of his three years. He is the guy who people have a very difficult time staying between him and the basket. Does he need to improve his finishing? Yes. Do we need to improve the spacing a little bit better so he can make a pass that is open when there is help defense? Absolutely. I talk to our guys around the league. I have a lot of buddies who broadcast. Diante is really widely around the league by these guys. They think that they can’t stop him. I know that our fans sometimes question his ability but he has a couple of things going for him. One, he is incredibly durable. He has never been hurt. He plays a ton of minutes. He never gets tired. He needs to improve some choices but you can say that about almost anybody. I think that Diante Garrett was probably the least of our problems last year.

CF: With Fred and T.J. Otzelberger, do you see any problems at all as far as getting players in here?

EH: I think that he made a very wise move in keeping T.J. I am happy for T.J. that he was able to stay here and be rewarded with an upgrade to his position. He is going to be working for a great guy. Fred has contacts. If you are talking about recruiting someone who is going to be a role player from Alabama, this probably isn’t going to help that much. That’s not who we are targeting. I think the level of recruit that we are going to be able to get in on right now given T.J.’s connections and the heritage Fred brings from the NBA and the fact that he has every general manager in the NBA on speed dial, that kind of player that you want to be able to compete for Big 12 championships, those guys want to go to the NBA. I think that the door just got opened big time. I think he’ll be able to bring the players in. 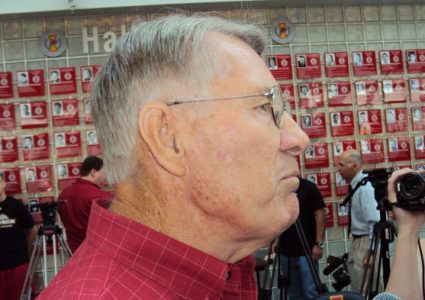