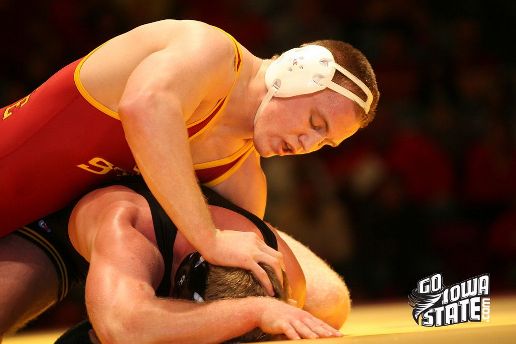 The NCAA Wrestling Championships begin today at 11 in Omaha’s Qwest Center. The second-ranked Cyclones will have their entire 10-man roster in attendance while hoping to compete for a national championship.

• No. 2 Iowa State heads to the 2010 NCAA Championships with its entire lineup of 10 wrestlers for the fourth-straight year. ISU looks to improve upon their third-place finish from a season ago. The Cyclones have placed in the top-five at three consecutive NCAA events. ISU head coach Kevin Jackson enters his first NCAA event with four returning ISU All-Americans.

Iowa State at the NCAA Championships

• ISU has notched team runner-up finishes a NCAA-record 17 times, with 2007 being the latest such occasion.

• ISU has established itself as one the premier wrestling programs in the country by finishing in the top five at the NCAA Championships 46 times in its history.

• ISU placed third at the 2009 NCAA Championships behind an individual title performance from Jake Varner at 197 pounds. Iowa State totaled four All-Americans in the event.

• For the fourth-straight season, a full ISU contingent of 10 wrestlers will battle for NCAA Wrestling bragging rights.

• For this year’s edition of the NCAA event, 54 All-American wrestlers will step onto the mats in search of reclaiming their positions on the podium

• Eight NCAA champions return to this season’s finale in hopes of notching another individual title. One of the returning champions is Iowa State’s Jake Varner at 197 pounds.

• Competitors Angel Escobedo of Indiana and Troy Nickerson of Cornell will toughen the field at 125 pounds. Escobedo was the weight’s champion in 2008 and Nickerson took top-honors last season. Cyclone Andrew Long is the No. 5 seed in the 125-pound division.

• ISU 133-pounder Nick Fanthorpe has his work cut out for him in his final NCAA Championships. The 2008 All-American finds himself seeded 10th in a division returning six All-Americans, in total.

• Unseeded Iowa Stater Dalton Jensen will look to make a splash in the 141-pound division. Only two 2009 All-Americans return to this year’s 141-pound bracket.

• Senior Mitch Mueller will look to cap his ISU career with his best NCAA appearance. The No. 7 Mueller is seeded for the first time entering the event. Six All-Americans return in the 149-pound weight class.

• The chance for a repeat titlist at 157 pounds dissipated with the season-ending injury of Nebraska’s Jordan Burroughs. Six All-Americans will battle for top-honors in the division, with 2007 NCAA 149-pound champion Dustin Schlatter of Minnesota holding the No. 6 seed.

• Iowa State’s Jake Varner will look to make it four-for-four in NCAA finals appearances. Varner is the No. 1 seed at 197 pounds. The Iowa Stater was twice a runner-up at 184 pounds before claiming the 197-pound crown last season in St. Louis, Mo.

• The heavyweight division, nation-wide, has been exciting to follow all season. The competitive weight class sees the returning champion, Missouri’s Mark Ellis, stepping into action as the bracket’s seventh-seed. ISU’s David Zabriskie is the top-seed at the weight.

• Varner was a two-time finalist at 184 pounds as a freshman and sophomore before taking the title last year after moving up to 197 pounds.

• The native of Bakersfield, Calif., looks to join only 13 other four-time finalists in NCAA Division I history.

ISU Edged out for Big 12 Trophy; Varner, Zabriskie Win • Second-ranked Iowa State relinquished its stranglehold on the league championship March 6 to Oklahoma State, which took the Big 12 Conference crown with a 70.5-point performance.

• Varner’s finals win came over Nebraska’s Craig Brester by decision, 5-2. Varner holds a 5-1 advantage in matches against the Husker 197-pounder.

• Zabriskie avenged an earlier loss this season to OSU’s Jared Rosholt by knocking off the top-ranked Cowboy in the heavyweight finals in overtime, 3-1 (SV2). Zabriskie is 6-3 in his career against Rosholt.