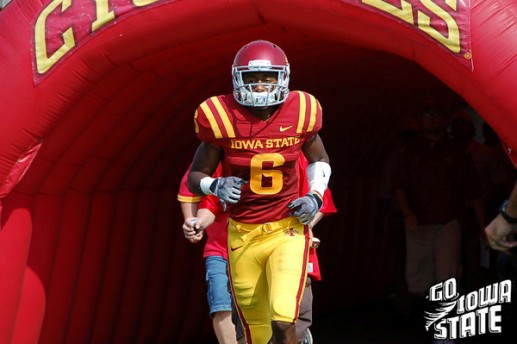 We had another fine week in the world of Iowa State athletics since the last time I wrote to you on the site. According to what we know, finals went well. The student-athletes are now on break from classes and I’m getting excited for my trip to Arizona here in a week.

I cannot put into words how excited I am to watch Iowa State participate in the 2009 Insight Bowl. The more I look at this match-up, the more I think that Minnesota is the perfect opponent for our Cyclones. In fact, I really believe that any Big Ten team would be great for Iowa State. The Gophers run a traditional style of offense and don’t have enough speed to expose Iowa State’s defensive shortcomings.

The one thing that concerns me about Minnesota is their defensive front seven. That unit is actually pretty good for the Gophers. That could present some problems for the Iowa State offense, that was struggling at the end of the season.

I look at all bowl games like this though. It all comes down to one question. Who wants to be there more? There is no secret that in this instance, that team is Iowa State. The Cyclones are excited to be representing the Big 12 Conference and they’re ready to prove that they are a program on the rise. Many Cyclone fans whom I have talked to are already excited and looking forward to next season! These extra practices will help that cause greatly. The extra exposure is great for the program and in the end, this is a young football team that is only going to get better.

As far as basketball goes, yesterday’s win over Bradley was just more evidence that this is an improving basketball team. The Cyclones are now back on track after winning two games in a row. Momentum is going to be the key word as we approach the Big 12 Conference season. The team needs to take care of business against North Dakota and Houston before the Duke game. After the Cyclones match up with the Blue Devils on Jan. 6, Iowa State will have take on North Dakota State followed by a brutal schedule to begin Big 12 play.

The first Big 12 game is at home against an unbelievably talented Texas team. Then, it’s consecutive road trips at Nebraska and Texas Tech. A home game with Kansas State and a trip to Norman will wrap up Iowa State’s first five conference games. Now that is a tough schedule!

The team absolutely needs to have some serious momentum heading into that stretch.

Over the course of the last two games, Iowa State has played tough defense with an up-tempo mentality. That needs to be this team’s identity for the rest of the season.

I have seen a lot of great improvement from Marquis Gilstrap lately. You can see it from him that things have finally started to click. We’re just starting to see his full potential. It’s like a light bulb has gone of in his head. He needs to keep rebounding and keep blocking shots. Some of the swats that Gilstrap has made so far this year have been nothing short of amazing.

Going back to my piece last week though, this team still needs to develop a third scoring threat. That will be a major key come Big 12 time. I’m excited about this team’s improvement over the past few weeks. January’s schedule is very difficult, but it should be a great measuring stick for this program.

This was the right decision for the McDermott family. I can’t imagine how hard that situation could have been with Doug playing for Greg. This is a perfect opportunity for Doug to go off and make a name for himself, at his father’s former school playing for his father’s best friend. It’s perfect. I understand and support their choice 100 percent. Greg must be and I’m sure is a very proud father.

Thanks for a wonderful 2009. We’re looking forward to an even better 2010 here at CycloneFanatic.com.

Owners Box: Time to step up