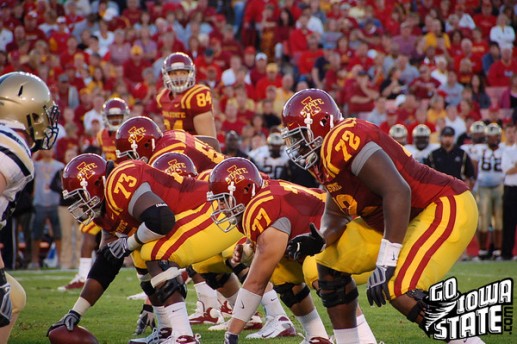 Bowl games were originally meant to be a reward for America’s best college football programs. In most cases, (other than a few nasty exceptions) athletes, coaches and fans get to go somewhere warm to play an out of conference foe in the post season. A win can cap off a great year. A loss could do the opposite.

But those extra bowl practice sessions are what really help develop a program over a long-term span. It’s especially key for a team like Iowa State, in year one of the Paul Rhoads era.

Young linebackers make large strides With the looming graduation of Jesse Smith and Fred Garrin, development by young linebackers will be crucial if the Cyclones hope to bowl again next season.

The word coming out of Ames is that the two freshmen, A.J. Klein and Jake Knott have been very solid during bowl workouts, specifically Klein.

“I don’t know if I can measure it, other than to say that we have made great gains,” Paul Rhoads told CycloneFanatic.com. “A.J. Klein, I made a comment to him on the practice field, because he knows what he is doing now, this was our 10th practice overall. Knowing what he is doing right now compared to the first 10 practices in August is such a huge difference how much he has improved in that time because he is getting coached. He is getting the extra reps.”

Rhoads also mentioned Jake Knott in the same conversation. Rhoads isn’t the only Cyclone who has had an eye on the two freshmen linebackers. Over the past three weeks, their senior leader and All-Big 12 linebacker Jesse Smith has become more of a teacher to the young defenders than anything.

Benton will make the most of opportunity Kennard Banks’ career in a Cyclone uniform is over. When he was “suspended indefinitely” a little over a week ago, that left hole in Iowa State’s secondary heading into Thursday’s match-up with Minnesota. Luckily for the Cyclones, Ter’ran Benton is back from a broken leg. According to the Iowa State coaches, Benton is back and literally, better than ever.

“Ter’ran Benton, coming back from a broken leg. He has maybe improved as much as anybody in these 10 practices,” Rhoads said. “He is playing better now than when he got hurt in the Nebraska game.”

Expect Benton to start at cornerback on Thursday in place of Banks.

Chris’ Take Who else has performed well during the extra practice time? One name that I have heard mentioned numerous times is freshman quarterback James Capello. Austen Arnaud will have the job heading into spring ball. But Capello could be positioning himself to battle with Jerome Tiller for the top spot in 2011.

According to sources, freshman running back James White has been very impressive. White, who stands 5-foot-7 and181-pounds, is a whole different animal than potential transfer Jeremiah Schwartz. Regardless of style, Iowa State needs a consistent number two at the halfback position next season. One who can make big plays would be nice. White could be the answer. Expect a healthy Beau Blankenship and some possible 2010 recruits to be in the mix as well. Maybe Bo Williams too.

One quirk that I have taken from the last two weeks is the coaches seem to be in love with the way that Ter’ran Benton plays the game of football. I’ve never heard a negative thing said about the sophomore. Coming back from a broken leg shows determination on Benton’s part. The fact that he is “better than before” proves that the guy has a ton of heart and that he was taking mental notes during his time off.

In the end, I really feel like these extra workouts will benefit one Cyclone more than anybody else. That is junior quarterback Austen Arnaud. He’s on his third offense since joining the program and according to what offensive coordinator Tom Herman told me on KXNO last week, Arnaud is finally starting to grasp this thing. I’m looking forward to Arnaud’s senior season in Ames. He’ll be comfortable. He’ll have a good offensive line in front of him. He’ll have a great running back in Alexander Robinson. Hopefully Arnaud will finally have a healthy group of receivers to throw to. Iowa State could score a lot of points in 2010. 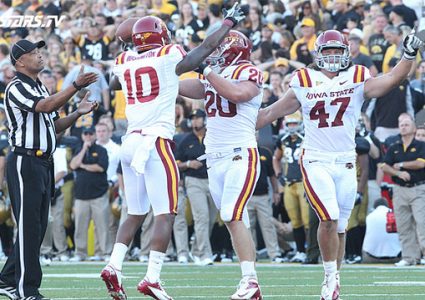