Here’s part two of Paul Rhoads’ press conference transcript from Monday. Do credit conditioning with how well your team is playing?

PR: The number one expectation for this football team has been to improve. It will remain that way. But, another expectation that we put on ourselves is to be the best conditioned football team in America. We talked about that back in January when Yancy McKnight and Clayton Oyster were hired to lead up that facet of our program. I think that in the last three weeks, we’ve started to see that. In the fourth quarter, I think that our football team is not fresh, but still hard charging. I think that on both lines right now, we’re improving from that aspect. We take great pride that we are in great football shape and great condition.

Texas A&M seems to kind of mirror your situation a little bit. They were picked to take last in the South. They’re coming off of a big win too. What have you seen out of them?

PR: The number one thing that you see is trying to compare college scores is a complete waste of time. You’re going to get nothing out of it. We certainly reminded our football team of that yesterday as we began our first day of preparation. They have an outstanding offense. It shows by the number of yards that they put up and the number of points that they have put up. They spread the field. They spend a lot of time in the empty formation. Their skilled athletes are very dangerous and defensively speaking, that’s not a good match-up. We’ve played together as 11 but we don’t have great skill on the open field so we’ll have to play very cohesive as a unit to at least try to slow down this offensive football team. Defensively, A&M always is going to play great defense. The wrecking crew, as they’ve been known for over the years will get after our passer. I think that we’ve now given up four sacks on the year, if my numbers are right. They get after the quarterback in the pocket as good as anybody. They’ve got great skill out in coverage. We’ll be faced with plenty of challenges come Saturday.

Have you thought about going to a bowl game now that you’re one win away from that?

What kind of attitude does this team have right now?

Is Jerome on the fast track?

PR: Jerome is going to be a good football player. Early in the season, we wanted to get him reps because we knew that he was a good football player and at some point in the season, he was probably going to have to play. If Austen was done right now and Jerome took over, you’d see marked improvement because of the experience that goes along with playing against a different color of jersey that you see in practice. We are fortunate to have two quarterbacks that are good enough to help us win games, right now.

What kind of limitations do you have on offense with Jerome in the game?

PR: I think at this point it is just maybe not as thorough of an understanding of what it is that we have to do and what the offense needs to do. Physically, he’s more elusive than Austen but he’s not as physical. It doesn’t mean that they both aren’t productive with their legs. They’ve both shown that they’re productive with their legs. I think that Jerome arguably has more velocity on his football even with a healthy hand, than Austen has. Just given that Austen has taken a lot more snaps against different competition, that little edge that goes along with that puts him farther along than where Jerome is right now. After the win on Saturday, did you get a lot of congratulatory phone calls?

PR: They’ve been coming in at a steady pace and they’re very much appreciated. Guys are proud of this football team and this football program.

You’ve said several times that this team needs to learn how to win. Have they done that?

PR: I think that they are learning how to win but it’s an ongoing process. What we had to do to win on Saturday was different than what we had to do to win the previous Saturday against Baylor and whatever obstacles we might come up against in College Station could present another educational lesson. It’s ongoing. Are they learning to win? Absolutely they are.

Essentially, these are the same guys who were 2-10 last year. What has changed?

PR: I’m a huge believer in mental toughness and what it does to you as an individual and collectively, what it does for your football team. We have a mentally tough football team that takes advantage of opportunities to grow and learn. We were confronted with an opportunity to do just that on Saturday in the second quarter when Nebraska was driving down the field on us and they were going in to score. The game was going to become 14-3 and in my mind, the game was on the verge of being over. We took a timeout and our defensive football team changed. It changed in the middle of the damn game. That was a huge step forward. You don’t do that without being mentally tough. You don’t do that without the power of mind. We went out there and on first down, we limited them to one yard. On second down, they got five. On third down, David Sims intercepted a pass. We were a different football team from that point on in the game.

Can you talk a little bit about Jesse Smith and his great honor this weekend?

PR: That was certainly well earned. Jesse Smith is a tremendous football player. He is a better athlete than some of you might expect. He’s not fast but he’s a better athlete. He can vertically jump. He’s got explosive physical threats. He understands how to play linebacker. He does a nice job of reading the quarterback. Sometimes he stays with the quarterback too long but it gets him interceptions like it did on Saturday. I’m assuming that he still leads this league in tackles because of what he did on Saturday in those numbers and being named Big 12 Player of the Week and National Player of the Week. Those are honors that he earned.

Can you also talk about Mike Brandtner not only with his fake punt but his kicking?

PR: We are blessed to have an NFL talent in Michael on our football team. Our punting unit continues to do a great job. I think that we’re still in the top 10 in the country in net punt. That starts with the punter. You’ve got to have 11 guys out there doing their job but that starts with the punter. I think that Michael had a 50-some yard net average in the first half of that game. He had the fake punt run that he executed well. He then hit a couple, not as good as he could in the second half but punts inside the 20-yard line late in the game that we desperately needed to hang on.

How can a kicker hit anything 50 and out but yet make you hold your breath inside of that?

PR: There were a number of things that contributed to the blocked kicks and not just Grant. We’re working rapidly to make sure that we fix all of those things and don’t repeat it. What’s taken place before isn’t a repeated mistake. These were new issues that we got to deal with. He hits the one from 52 and it certainly would have been good from well beyond that. One of the things that I told the guys in this room was how sick we would have been to be standing here yesterday and lost that football game 10-9. It’s certainly a major issue with this football team and we’ll address it like anything else whether it be offense or defense.

Have you thought about backing up two yards and not telling anybody?

PR: We’ve always set the ball at the same place. We’re always talking about adjusting because Grant’s ball doesn’t necessarily lift up as much as you would like. I don’t know that is something that you just change. I don’t know why I always make a golf analogy because I am the world’s worst golfer but little things in golf make a big difference. If you change your grip a little bit, it’s going to make a big difference with everything that you do. If you make a change like that to a kicker who is capable of making 50-some yarders, he’s not going to make those 50-yarders anymore after doing that. Those are three points that you are taking off the field that way. I can tell you this because I personally did it. I stood at the line-of-scrimmage and took steps forward last week with an agile bag that’s probably three-foot in length, with my arms stretching with the bag and I couldn’t block his kicks last week. That’s just one of the things that we do to prepare him for a rush. We’re doing all of our right things but you’ve got to do them consistently well and you’ve got to execute in the kicking game just like you do in everything else that you do. How does the loss of Ter’Ran Benton affect your depth chart?

PR: Quite a bit. We’re thin there, especially with James having to sit out the first half. We’ve got to make some movements and changes with our nickel players and get Zac Sandvig filled in there in quick fashion. When Michael O’Connell had already replaced TB at the nickel, now Mike’s got to go back and play safety and Zac said ‘I’ll do it.’ He finished the game out at nickel. You don’t do that unless you pay attention in every meeting you go to and every practice. That’s the sign of a smart football team.

Are the true-freshmen backups ready to go?

PR: They’ll be ready. At this point in the season, I’d rather not do that. Unselfishly, I think that they’d be ready to step up if it would help us win a football game. 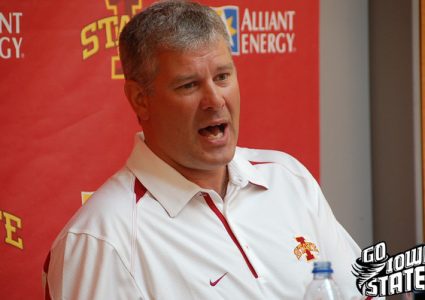