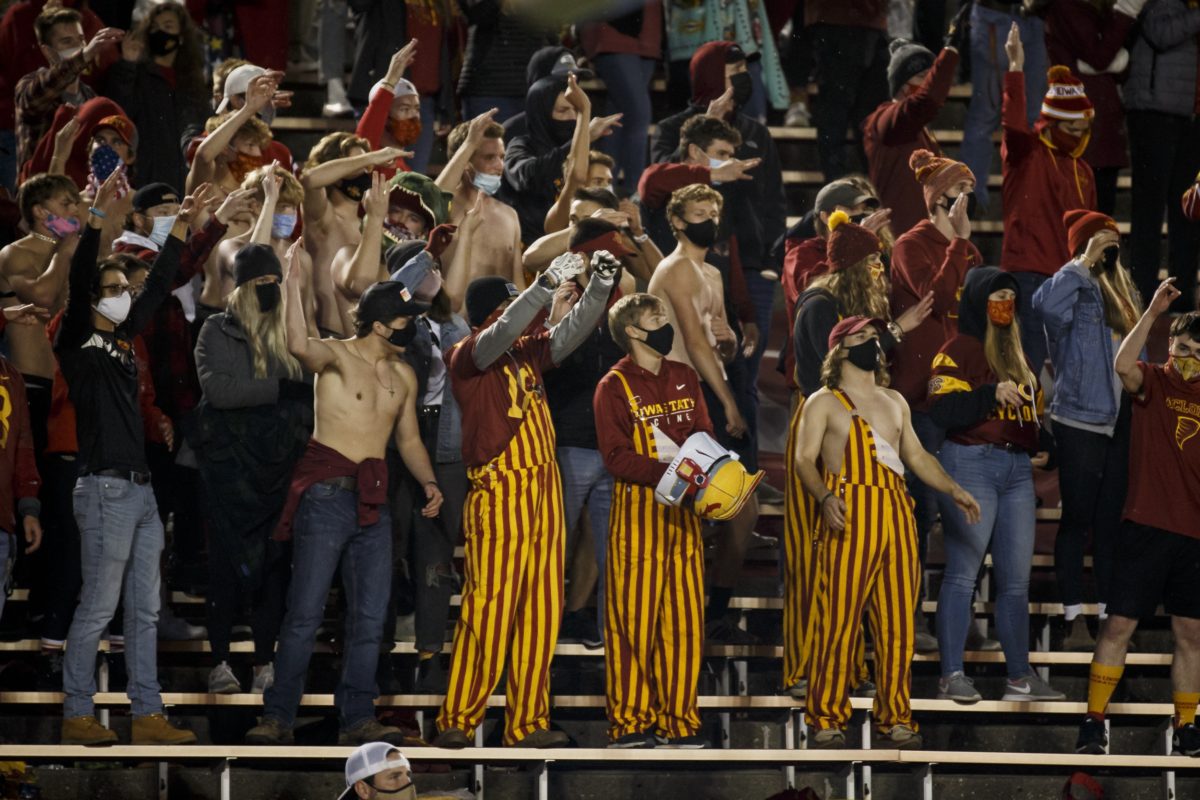 Bill Martin remembers the elation that enveloped the crowd at Clyde Williams Field after Iowa State beat Oklahoma 10-6 on Nov. 5, 1960 — the Cyclones’ first win over the Sooners in 29 years.

He remembers ISU’s players hoisting then-head coach Clay Stapleton on their shoulders and parading him off the field to resounding cheers.

He remembers attending his very-first college football game as a ninth grader with his twin brother, Bob, alongside.

What a memory — and Martin, along with fellow longtime ISU fan Robert Newton, who also clapped and yelled after that win — got to relive it last Saturday when the Cyclones’ toppled the Sooners 37-30 at Jack Trice Stadium to notch their first home win in the series in 60 years.

“I remember my brother and I talking about the game afterwards,” said Martin, 74, who lives in Marshalltown. “It was great having a twin brother with me when when I went. “I lost my twin brother this year,”

His twin created a lasting legacy, along with countless fond memories that stretched beyond sharing the joy that stemmed from the Cyclones’ win over Oklahoma 60 years ago.

“My brother gave pitching lessons to a lot of girls in eastern Iowa that went on to be state champions in softball,” Martin said. “This past year they recognized my brother at several games for his contribution to softball here in the southeast part of Iowa.”

In 1960, the Martin twins were ninth-grade football players on a Woodward-based team. Many of the particulars from that soaring Cyclone triumph capped by Tom Watkins’ late touchdown have faded from memory, but the excitement they shared remains a vivid recollection.

“I remember it was really exciting,” said Martin, who didn’t attend Saturday’s game but watched and cheered from home, where he’s following COVID-19 safety protocols. “I remember the stadium there. It was pretty much just two sides and bleachers on the end. Compared to today’s football stadiums, it was pretty hokey, but it was really great. I remember when Iowa State come out how excited everybody got. I think that day — I think the news said there was maybe 15,000 or a little more than that at the game, but that seemed like a lot of people to me at the time. I remember the halftime show. I’d never seen anything like that. That was great. Also, I remember Iowa State going ahead and how excited everybody got. And then at the end of the game, I remember them carrying the coach off. Everybody went on the field like they did (in Ames) the other day. That was really good that way. I looked up — Iowa State, that year they actually had a pretty good record. They were 7-3. They were 4-3 in the Big Eight. They also beat Nebraska that year. That was another good win for them.”

Indeed it was. Coincidentally, Nebraska also lost that day. Kansas shellacked the Huskers 31-0 in Lawrence.

Newton, who was a freshman at Iowa State while witnessing the Cyclones’ win over the Sooners 60 years ago, also attended Saturday’s game with his wife, Elaine, and one of his daughters, Cindy Bishop of Grimes.

He hadn’t given much thought about his link to both huge wins until his daughter posed a question to him during the game.

“She said, ‘Weren’t you a freshman at that game?’” said Newton, who graduated from Iowa State’s veterinary school in 1967 and practiced for decades in his hometown of Winterset until returning in 2001. “I got to thinking. Yeah, I had to be. … Yeah, I was there.”

What a memory — and Newton, who is a student of the game and has been a season ticket holder since Jack Trice Stadium opened in 1975, let Saturday night’s triumph linger as his wife and daughter began walking back to their truck.

“I really did,” Newton said. “I’m not a big rah-rah fan, but I am a big Cyclone fan. I kind of study the game and try to remember back and this sort of thing. I hate to get too high because it seems like over the years — if you’re a Cyclone fan, you’ve had your feet knocked out from underneath you so many times. I had my grandson there once (in 2004) when we were gonna beat Missouri and go to the Big 12 (championship). Got to watch that one fade away and a few others. So I really kind of stood there in the stands and my wife and daughter, as they headed back to the car, I just kind of turned around and watched the team and stuff. I thought, ‘Well, this is pretty good.’”

Times change. Outcomes can be good or bad. And Newton, like ISU coach Matt Campbell, is not a fan of emotional peaks and valleys.

So when Campbell downplayed Saturday’s historic win and stressed that it happened despite the Cyclones not remotely playing a “perfect game,” Newton concurred.

“Well, he’s right on,” Newton, 78, said. “We’ve been there so many times. You probably couldn’t say it any better. You just don’t want to go up there this Saturday and see somebody stumble. You know they really from the latter part of the second quarter — especially in the third on — I thought they really acted like they were starting to get their act together. Like, ‘We’re not gonna let off the pedal,’ and I didn’t think they did. I thought the play calling was quite good and needed. I thought it was well taken care of.”

Indeed it was. Just like 60 years ago, when the Martin twins, Newton and 15,000-plus fellow ISU fans savored victory at home over the Sooners.

“I’ve been a continuing fan for all those years and I guess I don’t brag them up too hard when they win because I know that somebody else — if you go too high when they win, you’ve got to sit back and take it when they lose,” Newton said. “I don’t want a sharp top and I don’t want a sharp bottom. I’m old enough now that it’s time to just relish everything you can enjoy — and I am.”

So is Martin, who looks forward to being out and about more once this pandemic finally ends, or a new normal fully sets in.

“They played tough,” Martin said of ISU’s effort — especially in the second half — on Saturday. “I loved the 85-yard runback (by Kene Nwangwu) on the kickoff. That was super-good when they ran it down to Oklahoma’s 14-yard line. I’ll tell you when they did that, you just kind of had the feeling, ‘Hey, they’re going to win this game.”

Times change, but that winning feeling remains the same — in any stadium, at any age.

So when I reminded Martin that Campbell had called Nwangwu’s return “the play of the game,” I could almost see the smile form on his lips, even though we were roughly 60 miles — but not 60 years — apart when we spoke on the phone. 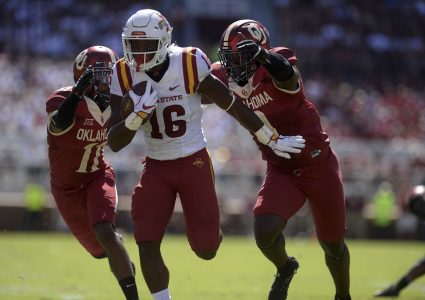