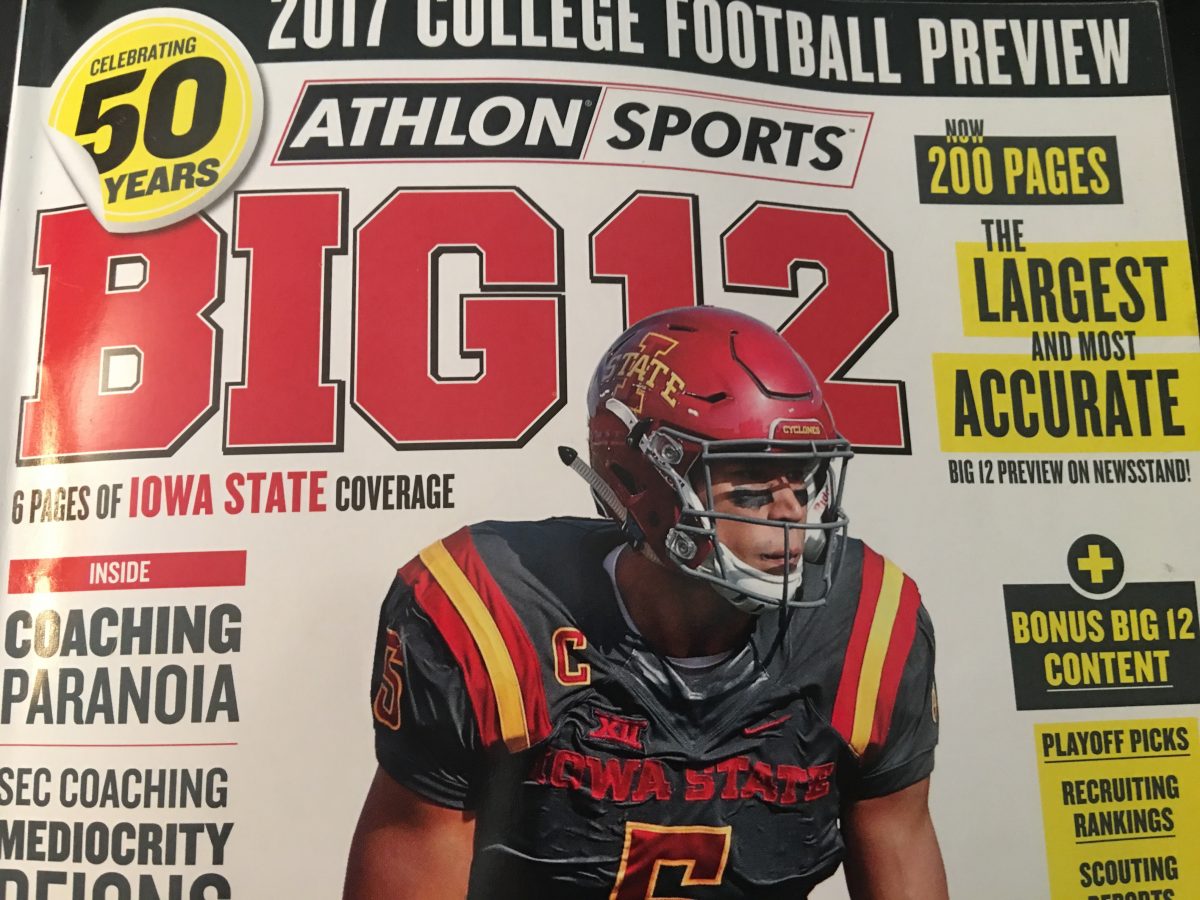 There is still more than 80 days left on the countdown to the start of the 2017 Iowa State football season, but it is never too early to look ahead. That fact is especially true for the publishers for the Athlon College Football Preview, which was released earlier this month.

Here are some highlights on where Iowa State stacks up according to the folks at Athlon:

** Iowa State has been pegged as the No. 60 team in the country entering the season. There are four Big 12 teams listed in the preseason top 25, led by Oklahoma at No. 8. Although, the magazine was released before Bob Stoops’ retirement was announced earlier this week.

Athlon picked the Sooners to win the league again with an 11-2 record (8-1 in the Big 12) followed by Texas, Oklahoma State, Kansas State and West Virginia in the top five. They have the Cyclones finishing the season 5-7 (3-6 in the Big 12) and in eighth place in the league.

They’ve predicted Oklahoma to beat Texas in the return of the Big 12 Championship game in December.

** Unsurprisingly, Allen Lazard, who is on the cover of this year’s regional edition, drew the team’s highest accolades entering the year. He was named a preseason third-team All-American.

Oklahoma led the way with three position groups ranked as the league’s best, most notably quarterbacks which the magazine ranked as the best signal caller unit in the country. That won’t come as a surprise considering the Sooners’ Baker Mayfield is listed by Athlon as the top candidate for this year’s Heisman Trophy.

** Other players Iowa State will face listed among the Heisman contenders were Oklahoma State quarterback Mason Rudolph (No. 9) and wide receiver James Washington (No. 20).

** Interestingly, Oklahoma’s Lincoln Riley was ranked as the No. 1 coach on the rise even before he was named the team’s new head coach.

“The Cyclones won only three games in 2016 but were painfully close to winning several more and flirting with bowl eligibility,” the magazine says under Campbell’s ranking. “On consecutive Saturdays in October, Iowa State lost to Baylor and Oklahoma State despite holding double-digit fourth-quarter leads.”

** In the ranking of Power 5 hires since 2012, Campbell was ranked No. 8 in the “jury’s out” category. Others in that tier include Georgia’s Kirby Smart, Nebraska’s Mike Riley, South Carolina’s Will Muschamp and Oregon State’s Gary Anderson.

** The magazine ranked Northern Iowa, the Cyclones’ season-opening opponent, No. 13 in the preseason FCS top 25.

** The following comes from the section titled “The Verdict” which accompanies the magazine’s prediction for the team’s record this season:

“Even though the Cyclones matched their win total from 2015, there was considerable progress in Matt Campbell first year,” the magazine says. “Iowa State lost five games by 10 points or fewer and won two of out of its final three. Bowl eligibility in 2017 is possible, especially if quarterback Jacob Park builds off his promising debut. The Cyclones have one of the Big 12’s top receiving corps, but the offensive line remains a concern. There are also question marks in the trenches on defense, where three junior college recruits will be expected to make an immediate impact. If Iowa State can find a way to win two out of three key swing games — Iowa, at Texas Tech and at Baylor — it could reach six wins for the first time since 2012.”

** The following comes from the section title “Scouting the Cyclones: Opposing Coaches Size Up Iowa State”:

“I saw some good creativity on offense, a system and style that they were trying to stay true to, and then on defense I saw a solid structure trying to play the even front stuff and play Cover 4 and just be sound and not allow a lot of big plays … (Matt Campbell’s) biggest thing is how well he can recruit to Iowa State. I think he can do a decent job there — it’s just going to take some time. The thing about the fans there is they’re super patient, probably the most patient group in the Big 12 because they come every Saturday, the place is always full. I know everybody’s so hard on coaches these days, but there’s probably a lot less pressure there than anywhere else in the league. I think he’s got a good plan for improving their program. He’s a really sharp guy and I can see them getting competitive and having some good things come their way in a couple years. You can get some kids out of the central states from the heartland, good kids, and build a solid culture there. But you have to evaluate kids correctly like Dan McCarney did …. They’re not talented at all on defense. Where they’ve struggled recently is to get those big guys up front. They used to have those 270-290-pound guys to play the two inside tackles, and they were hard to move around. Then they’d hit you with a couple guys coming off the edge. They just don’t have that right now — none of it, and you look at them in warmups and they don’t look like a Big 12 team. He has to change that, but he coached them as well as he could.”

** Jacob Park was listed as the No. 61 quarterback in the country on the magazine’s last page. Mayfield, USC’s Sam Darnold, Louisville’s Lamar Jackson, Ohio State’s J.T. Barrett and Washington’s Jake Browning made up the top five.