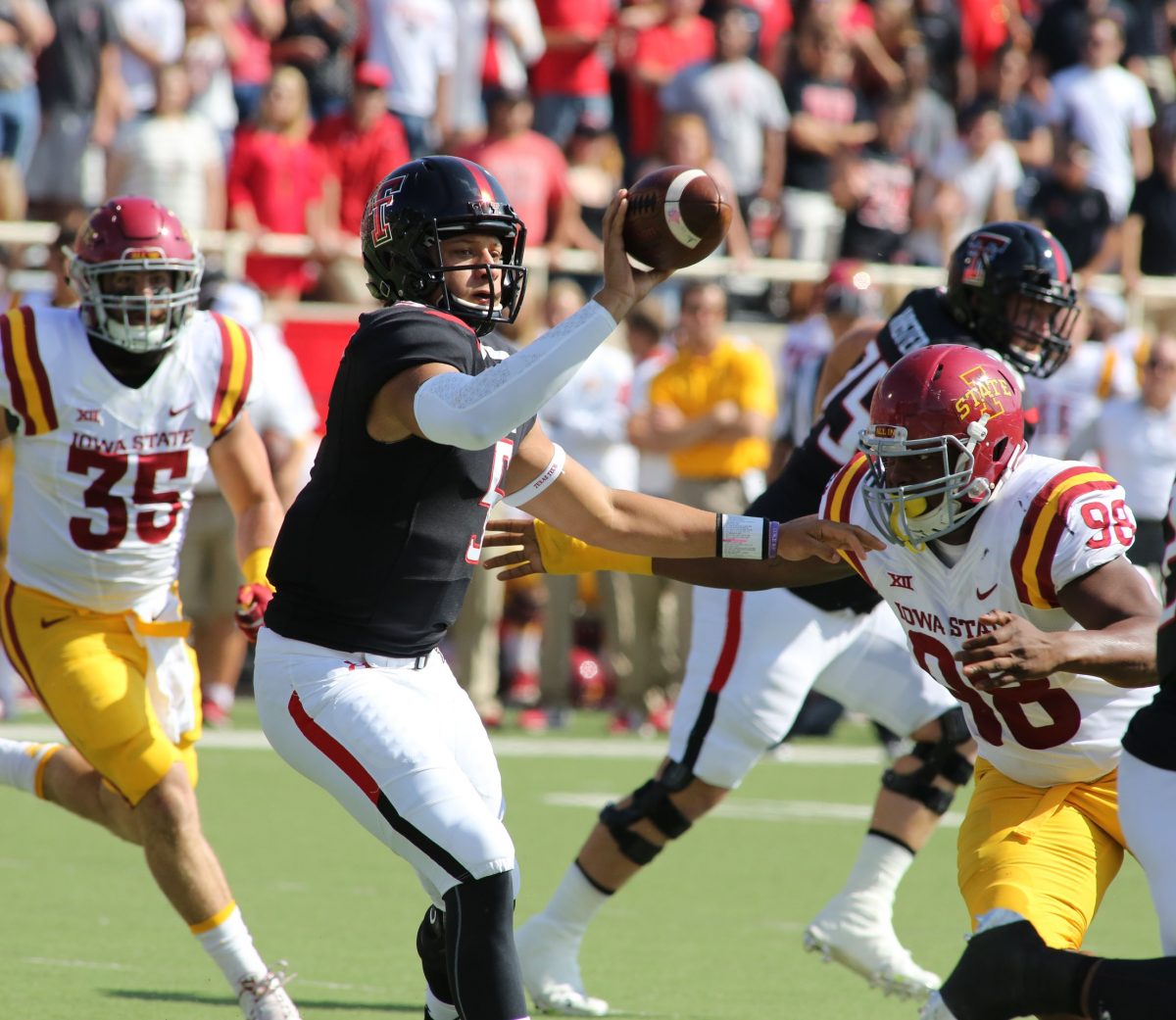 Daniel: Yeah, I guess so.

Miyagi: [sighs] Daniel-san, must talk.
[they both kneel]

There is always more than one way to skin a cat but you have to commit to the way you choose to do so. I think we saw one aspect of that on Saturday.

While the debate and talking points always seem to flock to quarterback things when it isn’t perfect and losses are mounting, there is still a surprising pile of passiveness toward what the defense did on Saturday. They gave up over 700 yards and 60 points and the lead story for many leaving Saturday was that it was a Sam Richardson problem in Lubbock.

Which of course was met with a literal onslaught of counterpoints insinuating it was indeed a normal occurrence and that his completion percentage is built solely on short tosses alone. But, that’s been discussed enough and not what I’m here to say.

Wally Burnham made the decision going in to Saturday to slow play the Red Raiders. Make them work methodically down the field and don’t bother bringing a lot of pressure because that opens up the big plays and Mahomes gets sacked pretty much never, so why bother? Eliminate the big plays, cover well, and tackle in space. Honestly, it’s a respectable game plan in my eyes.

But it didn’t work for a variety of reasons. There were blown coverages, missed tackles, and the pressure that was brought was inadequate for what was expected with even a three man rush. But the defense got caught trying to walk down the middle of the road instead of picking the left side or the right side.

But how did the grape get there? Because I’m a glutton for punishment I went back to find out. I charted every Patrick Mahomes pass to see how far downfield he threw the ball, how long it took him to throw it from snap to release, and the number of rushers the Cyclones brought to bring the pressure.

Broken out by down, the above shows the number of screen passes thrown and completed as well as all other passes accompanied with the average number of rushers by the Cyclone defense, the time taken to release the pass, and the distance downfield of the throw.

Texas Tech worked the screen passes early and often against the big cushion the defenders gave on the edge. A method that is often under attack by fans, presumably without considering the alternative; fans often want to press the wide receivers at the line when this coverage is employed, apparently unafraid to get bombed deep all game long. Giving the cushion can be successful here if the defense makes the read quickly, beats the blocking on the edge, and makes the tackle in space. The bad news on Saturday was those things rarely happened.

But, aside from the screen pass data by down, the rest of those numbers don’t distinguish much. On those screen passes, Iowa State gave up 6.4 yards per attempt, a way too large number for a pass variety that was completed on 17 out of 19 tries.

So, let’s look at more data for maybe more answers. First let’s look at the breakdown of non-screen passing plays by how many guys Iowa State sent to pressure Mahomes.

As you can immediately see, there were 28 throws by Mahomes that weren’t screens and half of them had ISU rushing just three guys. And, perhaps as you’d expect, on those plays Mahomes averaged more time to throw the ball. But, he didn’t complete his highest percentage of passes in those situations and he didn’t average the most yards per play, either.

You could maybe try to conclude that the extra defender in coverage in those cases compared to rushing four made the difference, because when four were sent bad things happened. But, it only happened eight times and that is a pretty small sample that can also be chalked up to randomness.

The most overriding theory here to me is that as more rushers were sent the time to throw did drop and the average distance the ball was thrown downfield largely trended downward.

But, for another angle, let’s also look at the same data broken out into how much time Mahomes had to throw:

My first thought when I look at this is surprise over the fact that just 11 pass plays gave Mahomes 3.5 seconds to throw or more. My perception told me it was much more than that. But not only that, only four of those passes were completed. Though as expected, as the time creeps up, the average number of rushers goes down, the average distance thrown goes up, and so does the average gain.

So what do I conclude?

Wally and Paul Rhoads know a lot more than us and this as well as what I saw both Saturday and when I re-watched the game proves it to me.

On Saturday, I called for more pressure because three guys alone weren’t cutting it and Mahomes was never disrupted with his gimpy leg. That, if you can’t get pressure after eight seconds or cover for that long either then you may as well flip the script and sellout to force Mahomes into quicker decisions.

The sample of more than three guys rushing is pretty small, but when it happened it was also ineffective in causing chaos in the pocket. By looking at these numbers, sure the defensive line didn’t get much pressure when eight guys dropped into coverage but when three guys rushed TTU had a completion percentage under 60, even though Mahomes had more time.

What I saw from re-watching the game and what the numbers corroborate to me is that the defensive scheme wasn’t so bad. More than the lack of pressure, Iowa State’s secondary was burned when costly mistakes led to huge gains and missed tackles prevented them from ever putting the Red Raiders behind schedule on offense.

There was the 75 yard touchdown on a wheel route with no defenders in sight at the time of the catch followed by 60 yards of running with poor angles and missed tackles, the 33 yard touchdown where some pressure was applied to Mahomes that should’ve been overturned but wasn’t, the devastating 3rd & 30 conversion, and the 37 yard touchdown with receivers behind the deepest safety that came back to the ball to make the catch at the goal line. None of those were schematic issues, they were breakdowns; sometimes massive breakdowns.

In my eyes, the biggest problems boiled down to breakdowns in coverage and missed tackles. More pressure would’ve helped, but who is to say that Iowa State could have capably applied that given how well Tech has avoided sacks this year? Given the pressure Iowa State had gotten in earlier games I would suspect that the defensive staff was surprised at how little they could get in Lubbock.

But, more importantly and looking forward, I hope that Wally and the rest of the defensive staff doesn’t make huge changes for TCU on Saturday. Yeah, it would at least be different to get beat quickly while blitzing but while making a gimpy Mahomes feel the pressure should’ve been a priority, attempting to do that to Trevone Boykin would likely end poorly.