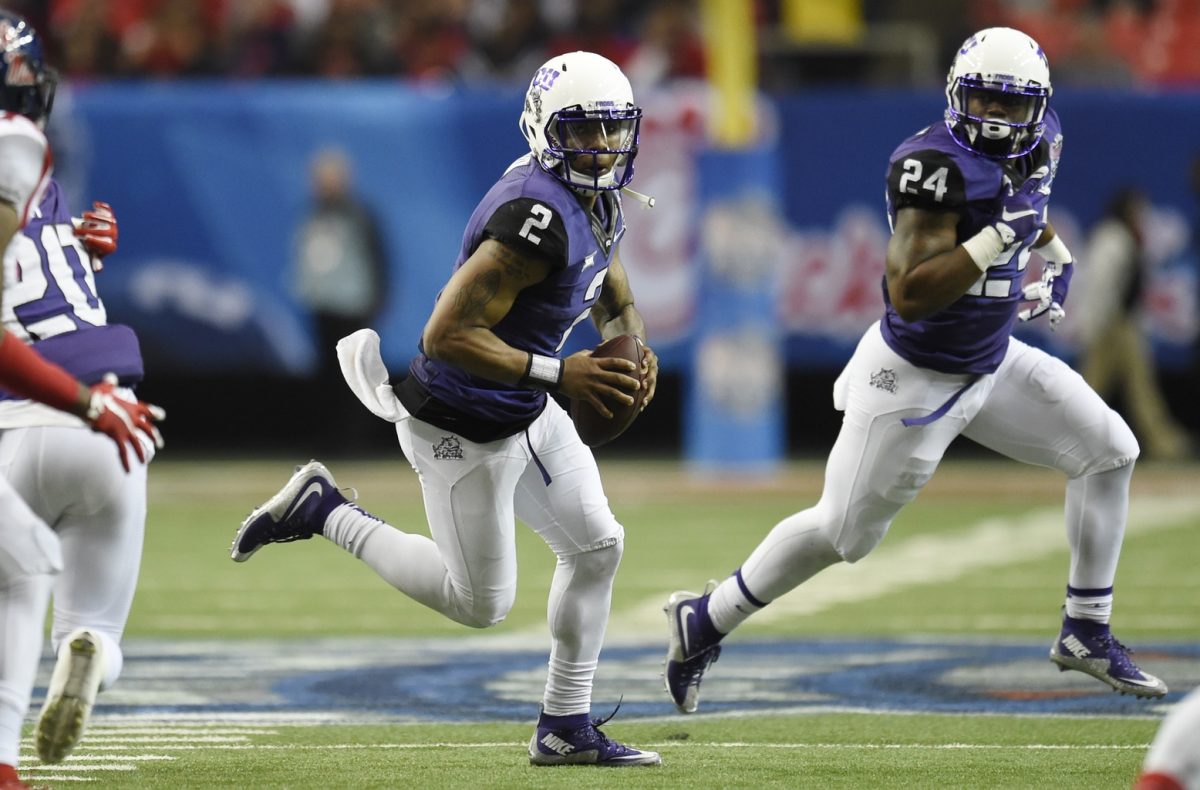 The Cyclone defense wasn’t the only group of fellas with a bad week last Saturday. Seven dudes making picks here and not even one could top the .500 mark. Sure, that isn’t quite the equivalent of giving up 66 points but maybe 45ish or so?

Regardless, the beat goes on and we’re all hopping back on the horse to hope for better results. But as always, this stuff is for fun, kids. Though if you put real dollars in the middle for picking these games I’d suggest you get help from other outlets. Iowa (-2.5) @ Northwestern – I don’t have a ton of faith in Northwestern but, like, half the Iowa team is out with injuries for this game. I’d like to be contrarian and pick Iowa to win this based on how Northwestern has been a thorn in their side in the past, but I’ll take the Wildcats.

Michigan State @ Michigan (-7.5) –  Michigan has looked good and Sparty has been struggling a little bit and while I think the Wolverines will win I don’t think they’ll cover.

Oklahoma (-4.5) @ Kansas State – The Vampire was close last week, this week he gets the job done….or, at least covers!

TCU (-20) @ Iowa State – Ugh. I want to believe that Iowa State will respond with a better outing on defense and a more polished offensive showing. Run Mike Warren successfully without falling in a huge hole and they’ll be off to a good start. I’ll cautiously take Iowa State.

Iowa (-2.5) @ Northwestern – Beathard banged up and Canzeri coming off 40+ carries against a pretty physical Northwestern defense. That doesn’t sound like a good deal to me. Northwestern 24 Iowa 13.

Michigan State @ Michigan (-7.5) –  Well, this is strange, right? I know the Fighting Harbaughs have a salty defense, but Sparty is too good to not make this close. Michigan State 21 Michigan 20.

Oklahoma (-4.5) @ Kansas State – The vampire almost pulled off his greatest heist yet last week. This is odd to say, but this is almost a must win for Stoops. The Oklahoma faithful are starting to get restless. Oklahoma 31 K-State 24.

TCU (-20) @ Iowa State – All signs point to this number being higher, but the Cyclones are better than their performance in Lubbock and I truly believe that. TCU is crazy talented, but they aren’t the same defense as last season. There is some opportunity to score. TCU 49 Iowa State 31.

Iowa (-2.5) @ Northwestern – Cats. I’ve called it for a while, and I’ll stick to my guns. I think Northwestern wins this game. The Cats have been a thorn in Iowa’s side for years, and the injuries are starting to mount for the Hawks. Plus, it’s hard to play offense in thickly groomed fescue unless you’re used to it.

Michigan State @ Michigan (-7.5) – Sparty. This line seems really high. I will take MSU to cover, simply because it’s a rivalry game, but I have no idea who will win. This will be a fun one to watch, and there will be a CHARGED UP atmosphere in Ann Arbor.

Alabama (-4.5) @ Texas A&M – Roll Tide. This seems like another game that Saban wants to just pound a team he feels is inferior to him. He is Darth Vader, the team is the Death Star, and A&M is a nice planet that doesn’t get a lot of respect from the writers of the movies.

Oklahoma (-4.5) @ Kansas State – Cats – I have learned my lesson. Don’t pick against Bill Snyder. Even if you’re wrong, be wrong with Bill Snyder– maybe you will get a nice handwritten note.

West Virginia @ Baylor (-21) – Bears – There is no one in the Big XII outside of Fort Worth that can stay within 21 of Baylor in Waco (it’s a different story if this were in Morgantown). Their defense has some real holes, which concerns me for their playoff and bowl hopes, but WVU won’t be able to keep up since Baylor is invincible at home.

TCU (-20) @ Iowa State – Cyclones to cover. I don’t know man. My heart says they keep it within 20 at home, but my eyes tell me that Boykin will hang 70 on the defense if they play like they did last week. There is no way they play that poorly two weeks in a row, right? I am going to take ISU to cover 20, but this game won’t feel that close. 52-33 on a backdoor cover.

Iowa (-2.5) @ Northwestern – Early in the week, I liked Iowa’s streak to keep going. The more research I do and the more injuries I hear about, the more I like Northwestern. Give me the Cats and the points.

Oklahoma (-4.5) @ Kansas State – That damn vampire has gotten me two weeks in a row. I’ll pick Oklahoma and see if he will make it three…

West Virginia @ Baylor (-21) – A lot of points? Yeah…But it’s Baylor in Waco and the Bears lost to West Virginia last year. There’s a lot of motivation here. Baylor by 28.

TCU (-20) @ Iowa State – After last week’s debacle, it didn’t matter what the spread was for this game this week. I was and still am going with TCU.

Iowa (-2.5) @ Northwestern – Ryan Field isn’t a daunting site, but it’s been a rough venue for the Hawks. Pat Fitzgerald is 5-4 vs. “Old” Kirk Ferentz. “New” Kirk’s gang is solid, but I’ll take the Cats and the points.

Michigan State @ Michigan (-7.5) –  As good as the Khaki crowd has been in rapidly rebuilding Michigan football, I don’t like a 7.5 spread in a rivalry game. Plus, Spartans have a chip on their shoulder for first time. I don’t know who’ll win, but I don’t think Michigan covers.

Alabama (-4.5) @ Texas A&M – I’m not doubting the Great Saban’s Royal Elephants the rest of the season. A one loss ‘Bama team is extra dangerous. The defense is salty, the offense OK. Aggies are coming off a bye week, but so what? I like the Crimson Tide to cover

Oklahoma (-4.5) @ Kansas State – Bob Stoops ain’t no Van Helsing. The Sooners are not “who we thought they were!” They’re a very good team with flaws. Wildcats have shown they can play with anyone and after a couple narrow misses, they at least have another one — or win it outright.

West Virginia @ Baylor (-21) – The Bears are 8-0 in McLane Stadium since it opened in 2014 and their only close call came that year against TCU. Baylor put up 61 points to win that by a field goal. Mountaineers can’t match the firepower. Shock Linwood runs wild and Briles wins by 28.

TCU (-20) @ Iowa State – That’s a big number, but it opened lower than expected at -18. Night game. Cyclones smarting from a blowout loss at Texas Tech.  Recipe for an upset? Maybe. I think ISU keeps it close for a while but the Horned Frogs pull away for a 49-24 win.

Iowa (-2.5) @ Northwestern – Northwestern has been the thorn in the Hawkeyes’ side for a few years, but this Iowa team seems to be different. Hawks cover on the road.

Alabama (-4.5) @ Texas A&M – The Tide are rolling and that doesn’t stop in College Station. Alabama covers.

Oklahoma (-4.5) @ Kansas State – I just can’t figure out this Kansas State team. I’ll take Oklahoma to cover but I’m not confident about it.

West Virginia @ Baylor (-21) – Baylor is good but the Mountaineers can put up some points too. West Virginia covers but the Bears get the win.

TCU (-20) @ Iowa State – After that performance last week I just don’t see how the Cyclones will slow down Trevone Boykin. Mike Warren will get his yards and ISU will put up a few points, but the Frogs cover.

Iowa (-2.5) @ Northwestern – With two tackles out, CJ Beathard might be forced to run around a bit against a good Northwestern defense.  That sounds like it could be an issue if CJ has a bad wheel.  I like Northwestern to win 13-10

West Virginia @ Baylor (-21) – Just two weeks ago WVU looked to have the best defense in the Big 12.  They lost their leader on defense and have struggled since.  BUT I think they can score on Baylor and get a back door cover.  58-41 Baylor.

TCU (-20) @ Iowa State – TCU has struggled on the road and ISU has to rebound in the worst way to save face on this season.  I look for a competitive game but TCU being to much in the end.  TCU 49-31.