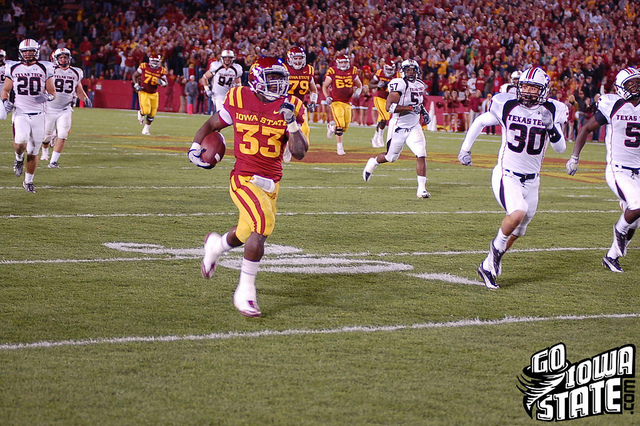 I watch a lot of T.V. And worse than that, I watch a lot of reality T.V.  I’m not ashamed to admit that I have seen a good portion of every season of Big Brother. I’m convinced I would dominate Survivor like Tiger Woods manhandled the PGA tour earlier this decade. I truly believe I could go toe-to-toe in a quiz show game with that Jeopardy dude who had a Dimaggio-esque winning streak in 2004. And I’ve seriously contemplated sending in audition tapes to the Real World and Amazing Race. (Although, as much as it pains me, an average-looking dude from Des Moines is probably not much of a ratings boon. Their loss.)

Yet, as great as that programming can be, it has nothing on the best type of reality entertainment we saw Saturday night.

When sports are played at an exceptional level like the Iowa State-Texas Tech game, no type of entertainment, scripted or non-scripted, can compare. It had more captivating ingredients than even Vince McMahon and his WWE producers could conjure up.

Young Talent. One of the most time-tested strategies for a TV show is to find the next big thing. It’s a pretty easy formula that’s been recycled through the years from "American Bandstand" to "American Idol." Everybody loves to say, "Oh I remember watching Taylor Hicks before he struck it big." Ok, bad example.

But my all-time favorite of these shows was "Star Search." (Not the reincarnated version hosted by Arsenio Hall, that one was atrocious.) For you young folks, imagine if you combined "America’s Got Talent" with the NCAA tournament, throw in a rambling Ed McMahon and bad ’80s hair and you’ve got yourself "Star Search." Scintillating television.

The great part about college sports is each year, a new face emerges and becomes a household name. With one 61-yard play on Saturday, Shontrelle Johnson morphed from a back with potential to an instant revelation. Ben Bruns put it best on the Cyclone Network broadcast, "I’d like to welcome the Big 12 to the Shontrelle Johnson show."

It’s been a while since I remember a freshman at Iowa State with the dynamic ability Shontrelle has. He is a guy with the "hold your breath" quality that most elite players have.  We really haven’t had a football player with that quality since Seneca left in 2002. It’s a reassuring thought that Shontrelle will be around for three and a half more years. I’m guessing "The Rabbit" has several more 100-yard games left in him. As Ed McMahon would say, "The judges give him FOUR STARS!"

Redemption. Everybody loves a comeback story. Seeing someone turn the corner and make something of themselves is the plot for numerous movies and stories. That’s what makes shows like "The Biggest Loser" so popular. And in some convoluted way, the ridiculous VH1 shows like "Tool Academy,"  "The T.O. Show 2" (yes that jackal got a 2nd season) and anything with Bret Michaels share the same redemption idea. In fact, that’s probably the best way to get on TV anymore, be a slappy that makes  a life change to become less of a slappy.

But while those reclamation projects are manufactured to get ratings, Austen Arnaud’s performance on Saturday was genuine and a joy to witness. Arnaud unnecessarily took a lot of the blame for the offense’s less than impressive start the first four weeks. He did so without incriminating any of his teammates or coaches and was there to answer the media’s questions after each game.

On Iowa State’s first drive, he rolled left and threw back across his body into a very dangerous area populated by Tech safeties, you could hear the murmur in the crowd as they collectively thought, "Oh no, not again." Luckily that ball fell to the ground and Arnaud was on point the rest of the night. The touchdown passes to Reynolds, Lenz and Franklin could not have been put in a better spot. His four touchdown throws were a career high and the most by a Cyclone quarterback since Bret Meyer’s flawless performance at Texas A&M in 2005.

It was fun to see Arnaud with a little bounce in his step again or as the kids say, his "swag" was back. It was if he was telling everyone that was watching, "Don’t worry, I got this."  And did he ever.

Drama. It always irritates me when programs like "Dancing with the Stars" do that cheesy elimination climax setup where the music becomes intense, the lights dim, the host gets real serious and the two contestants on the block act like the emperor is about to give them a thumbs up or down vote to decide their fate. And then right before they announce the decision of who gets the boot, the camera zooms out and the host says, "We’ll find out….after this break." Way over the top. Believe it or not, my life will not be altered if I am unable to see Rick Fox or Audrina Patridge do the foxtrot for another week.

The game Saturday had real drama, not fake "The Hills" garbage. So many ups and downs. But none were as critical as the Josh Lenz near calamity early in the 4th quarter.  Leading 31-24, the Cyclone defense came up huge to force a 4th and one. The first thing that ran through your mind was Tech was going to go for it. They send their punt team out and you relax for a second then think, "Oh (bleep), they’re definitely pulling a Kirby here." They punt it away and you take a sigh of relief. Only to see Lenz not call for a fair catch, drop the ball, and Tech hop on the turnover deep in Cyclone territory. That was definitely a shot to the groin. You could sense the Cyclone nation preparing to double over in agony. After an incredibly long 10 seconds, the bodies scatter and there is Mr. Lenz at the bottom with possession.

As we went to break on the radio broadcast John Walters said, "We’re going to take a break….and I need one to restart my heart."

Good luck trying to recreate that moment on "Teen Mom."

Action. I get a kick out of the artificial action sequences in "Survivor." They always have some cockamamie contest in which the tribe members have to risk life and limb by overcoming one ridiculous obstacle or another all in effort to get something like an herb garden. But the best part is the ultra-cool host Jeff Probst narrating with that obscene music soundtrack in the background. Just think if Probst followed you around every day: "And Blum is merging onto the interstate.  But beware there’s a Mazda charging right behind him, how will he overcome? Look out, here comes a semi! Only 10 seconds left to merge…will he do it? Blum has to pick it up, has to step on it! Does he want to get to work or not?!  He’s got 5 seconds, and OH NO…a female driver with Hawkeye plates in the way…a huge obstacle! WOW…he’s done it!! What a finish!!!!

Needless to say, the action sequences in the I-State-Tech game were a little more interesting. I wrote last month about the need for the Cyclone offense to get more "MacGruber’s" (explosive plays) in order to become a more dynamic offense. Prior to Saturday, the Cyclones had seven MacGruber’s in four games. In the Tech game, the Cyclones had five:

So if you’re scoring at home, all five explosive plays led to Cyclone points. Throw in Jeremy Reeves’ kick-off return and you have a sixth explosive that led to points. And yes, I’m petitioning Iowa State’s marketing staff to play the "MacGruber" theme song after each of these plays, I’m crossing my fingers.

Celebration. Very rarely does anything on TV cause you to celebrate deep into the night. I can think of one exception, when that "Man vs. Food" guy conquered a massive steak in Texas I celebrated like I had just won the lottery. Andre champagne was flowing like you wouldn’t believe. (Kidding, of course.)

But there is something way special about being in Ames on the night of a big victory. The tailgating goes into the early morning hours. Welch Avenue is slammed with happy students and old wackos like myself who still pretend they are in college. It’s a festive atmosphere that is impossible to rival.

That’s what keeps you coming back. Being a Cyclone fan isn’t for the faint of heart, but victories like we saw on Saturday make it more than worthwhile. When you look back years from now, it will be fun to remember the "52 Special."

Now let’s go get the Utes. And might as well pack the Jack while we’re at it. Because let’s face it, who wants to sit at home on the couch? Saturday night TV is brutal.