Recently, I have been catching up with the high school coaches of Iowa State’s commits in the 2021 recruiting class. Last week threw me a few curveballs as the program added four players into the fold, including Kansas City defensive tackle Howard Brown, who you will read about today.

Brown, who plays for William Lowe at Lincoln College Prep, is a three-star recruit considered the No. 50 defensive tackle in the country by 247Composite. He also held offers from Kansas and a handful of Division I programs, but what makes Brown truly unique is that he plays quarterback along with his duties on the defensive line.

I know how it sounds, a 6-foot-2, 290-pound quarterback? Believe me, it struck me too, and Lowe laughs about it in the Q&A I conducted with him and is transcribed below, but he’s been one of the state of Missouri’s most prolific signal-callers over the last three seasons compiling more than 6,000 yards of total offense and 82 touchdowns. He is a physical freak who appears to be just tapping into his athletic ability.

As you’ll soon be able to tell, his high school coach sees it the same way.

Q: How have you seen Howard develop since he joined your program?

Lowe: “So, Howard came to us, I don’t know how much you know about Kansas City or our school, but we’re a college prep school, but we’re a public magnet school in the Kansas City Public School district. So, kids have to test into our school. If they test in, then they can get in. Howard got into our school in July of his freshman year so right before his freshman year. He was a big kid then. He was probably 5-11, 6-foot, 180 or 190-pounds. He said he was a quarterback and we all kind of laughed at him. He was such a big kid that we kind of laughed at him. As we got going that summer, we let him play some seven-on-seven and he really had just good footwork and a strong, accurate arm at a young age. So, he actually played some for us as a freshman.

The program was kind of on the rebuild at that time. My staff had just taken over. We were a pretty small team at that time. He was still a young kid. He’s young for his age. I don’t know if you know this, but his birthday isn’t until July 31 so he’s still 16 right now and he won’t turn 17 until July 31. He won’t be 18 until right before he goes to college next year. Right before we left for all this, he was 6-2, 292-pounds. I weigh him every day in weights class. He doesn’t have any fat on him. He doesn’t look 290. Probably a lot of coaches when they called they’d say, ‘He probably weighs like 250.’ You know they think he’s about 250, 260 but when he gets on the scale, he’s 290 and a lot of it is because he has such a strong form and a strong base. I mean, his legs are like tree trunks. If you’ve seen highlights of him running over high school kids, there’s not a lot of high school kids who want to tackle him. Plus, he has such good footwork.

I know Coach (Eli) Rasheed, the d-line coach, and Coach Nate (Scheelhaase), who recruits this area, that’s why they were so excited about him. He’s such a good athlete at that size. The knock on him and why he wasn’t getting Power 5 offers early is that he hadn’t played a lot of d-line. I’m telling you, of all the staffs that have come to visit him, Iowa State’s staff is top notch. They’re first class. They were the first ones to offer him because they recognized that he’s just a football player. When you have a kid that big and that strong, they didn’t care how many reps he had at d-line. They were the first school to offer him. Howard’s a pretty loyal kid.

He started for us as a freshman and we were 3-7. He could have left and went to a private school or maybe a suburban school that had a better program, but he stayed to leave a legacy at Lincoln. We were 11-1 last year and went deep in the state playoffs. That’s a credit to him for sticking around for four years. After three years, he has over 6,000 total yards and 82 touchdowns. Hopefully, after this year, he’ll have well over 100 touchdowns.”

Q: Do you think he would have garnered even more attention and offers if COVID-19 hadn’t prevented the spring evaluation period from starting?

Lowe: “He started to get a lot just at the start of the spring. He had over 10 major Division I offers already. He just likes Iowa State. He went on a visit with his Mom and she got to meet the coaching staff, Coach Campbell and Coach Scheelhaase and Coach Rasheed, and, I mean, she just loves all those guys. It’s not that he doesn’t have other options or a lot, but he has 10 other offers. Shoot, Kansas is closer. Kansas State is closer. There’s a lot of good schools that are closer. He just likes the staff at Iowa State. If he anybody sees him move, he’s going to blow up in college. I have no doubts about it. He’s going to be a really, really good player being that strong, that explosive and being able to move like that. I think Iowa State’s staff is really excited about him.”

Q: What have your interactions been like with the Iowa State staff?

Lowe: “We have three Power 5 recruits in our 2021 class so we’ve had a lot of colleges come through. The reason why Howard fell in love with Iowa State so fast is that they just seem so genuine. They really talk to him about becoming a better man while he’s in college and not so much about the football aspect. They kind of talk to him about how they can help him grow into a man and how they can help him in that aspect. I think that’s what himself and his mom really like. That’s just how the staff has been all along, just genuine. And, I’m telling you, Iowa State’s staff works harder than anybody else. As hard or harder than anybody else. I mean, shoot, I think they came down, they saw Howard, shoot, three times, maybe, this spring. They came to our school before all this happened. They probably would have came a couple more in the spring when we were having workouts and stuff. I think their staff just works extremely hard. I’ve been really impressed by them.”

Q: At the end of the day, what do you think Howard will be adding to Iowa State’s program as a player and as a person?

Lowe: “The Iowa State coaches would tell you the same thing, we laugh about it when they come visit, but if Howard doesn’t make it in football, he’s going to be a stand-up comedian. I mean, he’ll be everybody’s favorite kid on campus. He just has that type of personality. Always a big smile, good-hearted, always making jokes, just a happy kid. But, he is a tireless worker and an ultra-competitor. To be that big and that strong and still want to put the team on your back by playing quarterback, he could have just said, ‘No, I’m going to college to be a Division I defensive lineman, I just want to play defense,’ but he’s never wanted that. He’s always wanted to be on the field and help the team anyway that he can. I think that’s another reason why the colleges like him so much. His ceiling is extremely, extremely high. You have a kid that big and that strong and that athletic, he hasn’t even scratched the surface of how good he can be as a defensive lineman. That’s why I’m expecting him to develop and turn into a really, really good player at the next level.” 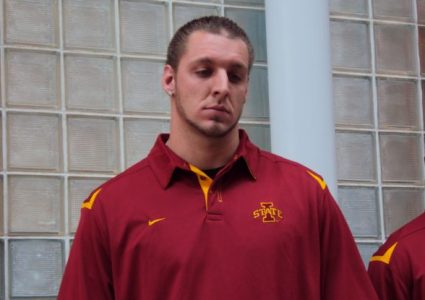