The Cyclone women picked up two big wins a week ago at Hilton Coliseum, but the 69-51 walloping over Texas on Wednesday might be their biggest of the year.

Just over a month after losing a physical battle to the Longhorns in Ames, Ashley Joens and the Cyclones went into Austin, Texas and absolutely dominated.

The Cyclones forced 19 turnovers and held Texas to 26.9% shooting from the field.

It was an absolute clinic and it helps Iowa State erase almost any doubt it had about making the 2020 NCAA Tournament – at least barring a sizable collapse.

All of this happened days after Joens dislocated her shoulder against Oklahoma and came back in to help her team to the win.

Joens finished with 23 points and nine boards and looked as if she was never hurt.

Kristin Scott had another solid performance with 20 points – her sixth straight game scoring 15 points or more.

Even Rae Johnson, while not being 100% healthy, managed to score in double figures for the second time since conference play started.

It’s all coming together at the right time.

There was no sign that this was coming when Bill Fennelly’s team started 1-3 in league play with a pair of losses at Hilton, but he and his team have found a way.

That mark is just half a game back of Texas (7-4) for third place in the conference as well, with six games left.

If Iowa State can finish out better than Texas – who will also still have to play TCU on the road as well as Baylor – and earn a No. 3 seed or better in the Big 12 Tournament, they’ll get another opportunity to improve an already rising NCAA seed.

It sets the stage for another big game, as the Cyclones try to earn their fourth-straight Big 12 win on Sunday at TCU (Noon, FSN). 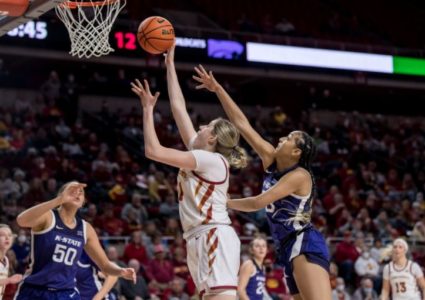 FERGUSON: Here’s to a big week

WBB: No. 6 Cyclones will forget the film, focus on rematch with No. 14 Texas