Just a handful of days removed from a three-game tournament in the Bahamas and four days before a rematch with No. 16 Seton Hall, Iowa State was not expected to play its best game of the year.

Although on Wednesday, in a 79-61 win over Kansas City, the Cyclones were far from it.

“I thought that [would be] one of the [most] mentally toughest games that we play,” Iowa State coach Steve Prohm said. “We’re coming back from the Bahamas where we did some good things. I knew it would be a while for us to really break away.”

The Cyclones were clinging to a six-point lead going into the final media timeout before Rasir Bolton exploded for 10 points in the final four minutes. Iowa State finished with an 18-point margin of victory.

“I was just trying to attack,” Bolton said. “In the first half, I was trying to find my spots and pick them. Then it was just all about winning.”

Bolton provided the spark in the second half for the Cyclones offense, getting to the rim and earning 11 free throws. The sophomore made 10 of them and finished with 19 points – all of them coming in the second half.

Prohm spoke highly of Bolton, saying that he is perhaps the best on the team at getting to the rim.

“I think at the end of the day, our offense is predicated on ball movement and player movement,” Prohm said. “I think all good offenses are unless you have dominant low post scoring. We were real stagnant at times. The ball stuck.”

That’s where Bolton came in, getting downhill and hitting his shots at the line.

He was one of three Cyclones that finished with 19 points, along with Tyrese Haliburton and Michael Jacobson.

“We finally got some movement and I think [Bolton] did a great job,” Prohm said. “That’s the main guy that can really get downhill, put pressure on the basket, and draw fouls.”

Jacobson’s game went just about the opposite of Bolton’s, as he scored 15 of his 19 in the first 20 minutes of play.

Coming off of a game where things didn’t go how Jacobson wanted them too, it was big.

“[Jacobson] works every day,” Prohm said. “He’s got high character. He got himself in a position where he was able to score around the basket. He played well tonight and gave us a really good lift in the first half when we needed one.”

Although, the offense was stagnant at times, Jacobson and his team say that defense is at the forefront of the things they want to improve on.

The numbers looked better than they have lately for the Cyclones, though, there is more work to be done.

“The biggest thing [to improve] is defense,” Jacobson said. “We’ve just got to keep getting better on that end. They didn’t shoot great tonight at the three, but that’s a weakness for us. I think it’s the same story: we’ve got to guard the ball screens better, guard the three-point line, and we’ve got to rebound.”

Iowa State held Kansas City to 22 percent shooting from the 3-point line and out-rebounded the Roos by 11.

However, when those aren’t the opponents’ strengths, then those numbers can be deceiving.

“I thought we did a better job tonight, out-rebounding them by 11,” Jacobson said. “That’s a team that kind of plays a slower half-court game, so there’s not going to be a ton of possessions or misses to grab rebounds, but yeah, it’s a good margin.”

Iowa State had a fourth player finish in the double-digits in scoring with a big performance from George Conditt IV in the post.

In just 17 minutes of floor time, Conditt corralled 12 points, seven boards, two blocks and even prompted a tweet from Ken Pomeroy with the hashtag, ‘#freegeorge.’

“He’s a good player,” Prohm said. “He’s just tapping the surface. He can really change shots at the rim. He’s just going to get better and better. With the minutes he played last year, he’s basically a freshman, but he’s got an unbelievably high ceiling.”

Fellow big man Solomon Young finished with four points and five rebounds, being limited to 11 minutes because of foul trouble.

That prompted a tweet from Young saying that he couldn’t let his confidence slip again.

Next up, with Seton Hall, the Cyclones have another opportunity to chase a big win, and despite the game that Iowa State played tonight, it’s still looking to be a good one. 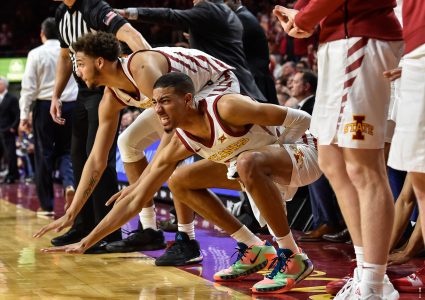 In Tyrese Haliburton’s absence, Rasir Bolton — and everyone else — takes on expanded role