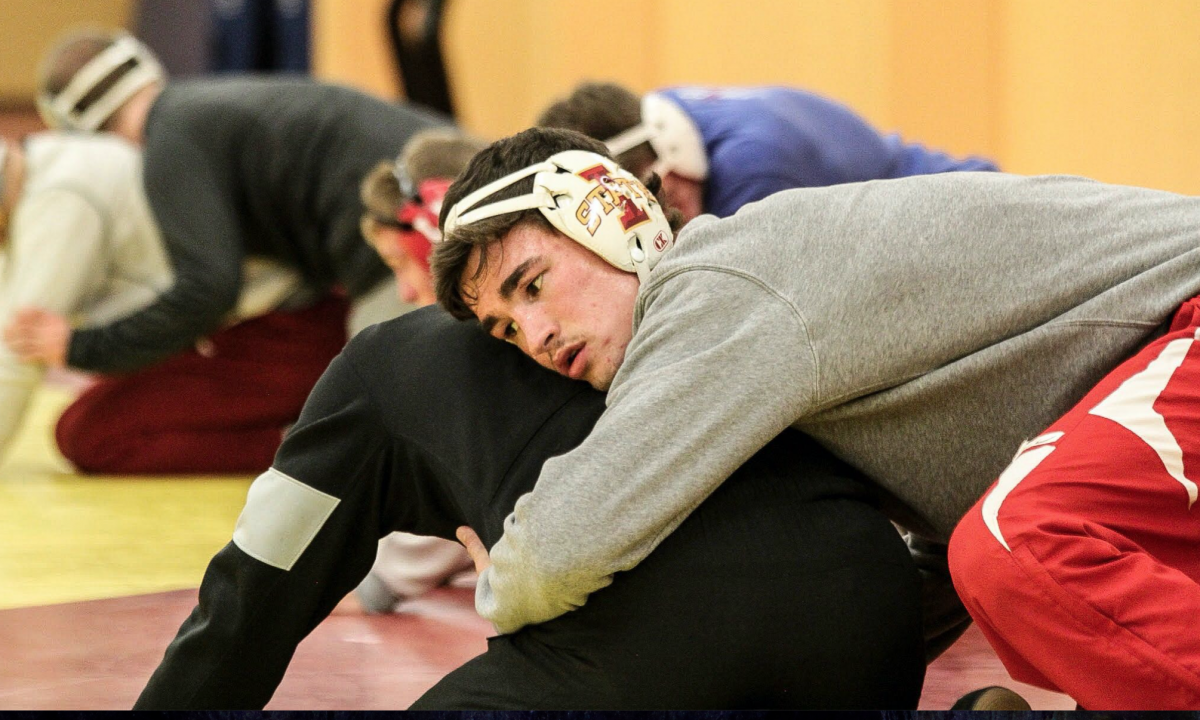 AMES —  When opposing wrestlers face Iowa State 149-pound All-American Jarrett Degen, they can be certain of at least two things.

One, if they shoot early and get to his legs, they’ll likely secure a 2-0 lead.

Two, after that, they’re in for the scrap of their lives as he maneuvers his lithe 6-2 frame into a multitude of mystifying attack positions.

Degen — one of eight returning NCAA qualifiers for the resurgent Cyclones — is considered an “unorthdox” grappler, but his record speaks for itself.

And his rapid ascent at 149 has mirrored the improving fortunates of ISU wrestling as a whole under third-year coach Kevin Dresser.

“Degen is the biggest leader, I think, in this room,” said returning NCAA qualifier at 133, Austin Gomez. “He’s a returning all-American, so he’s where we want to be. So right now he’s the leader in the room. We’re following in his footsteps and we’re going to try to build off that and get higher on that podium and be national champions.”

Degen — who stands 6-2 and finished seventh at the 2019 NCAA Championships — was the Cyclones’ lone NCAA qualifier in Dresser’s first season.

So having eight teammates along for the tournament ride last season made the experience a heck of a lot more fun.

“It’s awesome,” said Degen, who compiled a 25-6 overall record last season. “You’ve got a whole team rolling with you. You’ve got to make plans as a team, you warm up as a team and everything. It’s just awesome to get all of those guys coming with you and you going with all of them. Having people to interact with. It’s fun. It makes the experience more fun.”

It’s finally getting back to being that way at ISU, which entered last season pegged 4th-best in the country. But season two under Dresser produced a meteoric rise that culminated in a 16th-place finish at nationals.

Yet the Cyclones are only perched at base camp as they prepare for the more technical climb toward renewed national prominence.

“It’s time for Iowa State wrestling to be a top-ten team and then eventually progressing to be a top-five team,” Dresser said. “That’s probably as bold a prediction as I’m going to get right now.”

Nine of ISU’s wrestlers are currently ranked — the most of any Big 12 program. Degen is a consensus third at 149. Sam Colbray is slotted from fifth to seventh at 184. Junior World Champion David Carr is ranked as high as 10th and poised to make his debut in the lineup at 157.

“We showed a little bit of what we could do last season and not only are we picking up on that, but everybody’s kind of fueling into it,” Colbray, one of the returning NCAA qualifiers, said. “Our tough guys are getting tougher and bringing everybody along with us.”

So quantity meets quality this season for the Cyclones, but how quickly that leads to more success is anyone’s guess.

“I’m old, so it has to happen fast, right?” Dresser said when asked about the rapid growth in his first two seasons. “My mom gets mad when I say I’m old, so I’m really not that old. But I talk a lot about having a sense of urgency. A five-year career for a college kid isn’t long. These guys are the pro athletes of the folk style sport — these guys are the pro athletes. So you don’t have to wait around to get it done and I think I’ve always had that mentality that it’s OK to try to win early and win often. We haven’t probably done that a lot yet, but, you’re right, we opened some eyes, but I told these guys last year, even before we had our press day last year, ‘If you guys make up your mind to be a top-20 team or a top-15 team, you’ll be a top-15 team.’ Now that was a team that was ranked 47th in the nation last year at this time. So I think sense of urgency is the word there.”

Degen frequently spars with Carr, whose father, Nate, was a three-time national champion for the Cyclones.

“It’s tough,” Degen said. “It’s fast and he knows where he’s going. If he doesn’t hit his first shot, doesn’t hit his second shot, he’s got a third shot right away. It’s just smart. Working with him and his dad, it blows your mind almost, just seeing what they’re thinking and you’re like, ‘I’ve never even thought about this in my life,’ but they’re doing it so easy.”

It’s been anything but for Degen and ISU as its risen from the ashes and recast itself in its customary role as “the hunted” instead of being the “hunter.”

Degen personifies that journey. Dresser said he’s most proud of the redshirt junior’s growth as a leader — even though he’s perhaps known best for falling behind early and finishing with a flourish.

“He’s tough as nails,” Dresser said. “He’s obviously a really hard draw for anybody — nobody wants to draw Jarrett Degen at any tournament because he’s so doggone unorthodox. And he’s turned into a good leader. He’s kind of a lighthearted guy but I think everybody in the room knows that if you get him, you kind of have to go hard and go the whole time.”