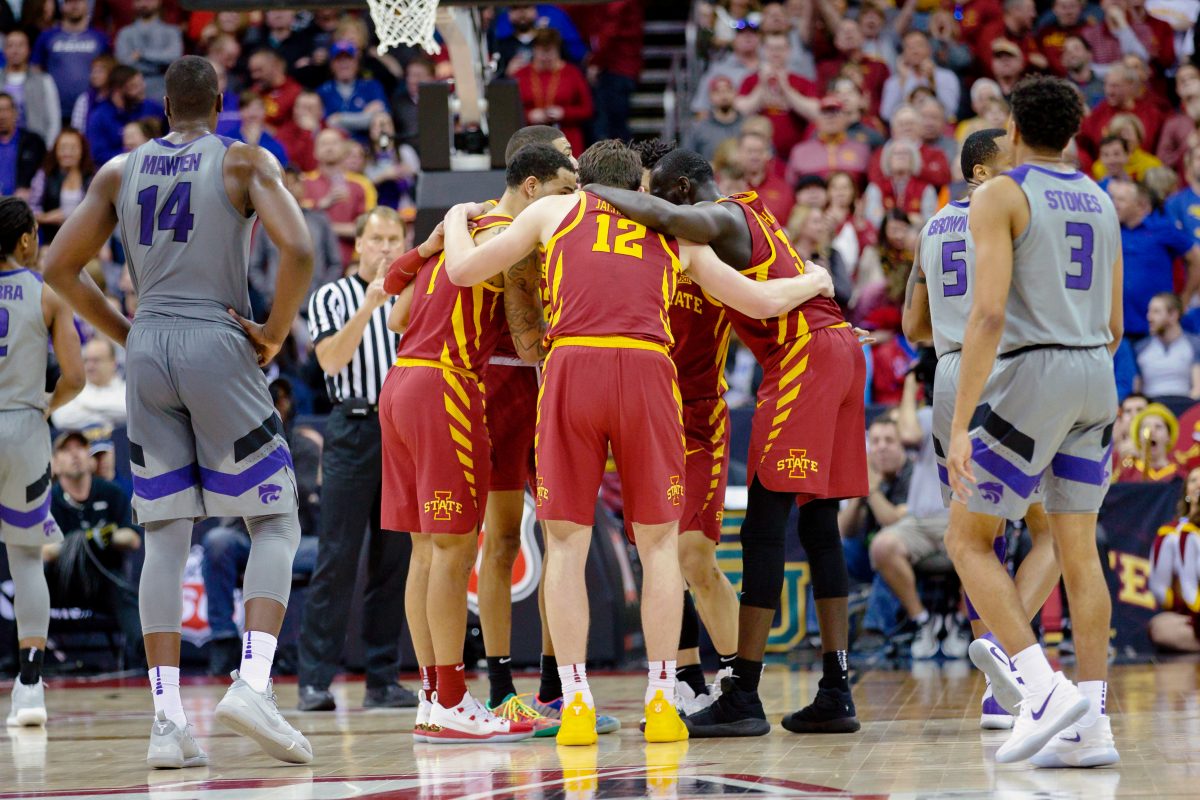 KANSAS CITY — Last one out, turn off the lights.

For the fourth time in six years, Iowa State will play for the Big 12 Tournament title on Saturday after a 63-59 win over co-Big 12 regular season champion Kansas State.

Add this one to the list of Hilton South’s greatest moments.

After you finish making the addition, get ready to join the mass exodus out of Central Iowa to Northwest Missouri. Do you really want to be the only one left sitting in Hickory Park when the next great memory is made?

I asked Nick Weiler-Babb after the game if he knew how many rebounds junior forward Michael Jacobson had pulled down. The answer is 16, which ties the Iowa State record for rebounds in a conference tournament game.

“Did he really?” Babb asked with wide eyes. “Jesus.”

Praise the Lord for Mike’s power on the glass. The former transfer from Nebraska left the Cornhusker State with dreams of trophies swirling in his brain. On Friday, the Huskers had their season ended in the Big 10 quarterfinals.

A few hours later, the forward, who played more than 50 games in scarlet and cream, helped push the cardinal and gold onto one of college basketball’s biggest stages.

“I wanted to win basketball games. Iowa State is very good at doing that,” Jacobson, who added eight points to go along with his 16 boards, said. “It’s one of those things where I saw the success they were having, and it was something that really intrigued me. Now, it’s finally here. I get my shot.”

Jacobson’s impact on this win over the Wildcats was no bigger than when there were two minutes left in the game and the ball was flying towards the baseline after a Marial Shayok missed 3-pointer. It was Jacobson who got to the ball first, collecting his fourth and final offensive board, and tossed it out to Tyrese Haliburton.

Seven seconds later, Shayok’s second attempt on the possession bounced high off the rim and through the net to tie the score at 55. Without the unsung transfer, the star transfer never gets his second look.

WILLIAMS: How all three seniors (even Zoran Talley) shined in Iowa State’s dramatic win over K-State

The Wildcats could have been left for dead after surrendering an early lead and watching all of the momentum swing into Iowa State’s corner entering halftime with the Cyclones leading 35-25. Instead, Bruce Weber’s club battled back to tie the game at 38 less than five minutes into the second half and more or less held the lead until Shayok’s big shots struck.

Those young men are absolutely phenomenal competitors and they fully deserve to have been co-Big 12 regular season champions. They made Iowa State’s offense look elementary for a large portion of the second half.

“We just really struggled in the second half offensively. They were the main cause of it,” Iowa State head coach Steve Prohm said. “Credit them. But, fortunately, we were able to get out of here. It’s a great win for us.”

This game had a championship type atmosphere and will live in Iowa State lore forever.

When Lindell Wigginton announced he was returning to school for his sophomore year last summer, he did so with a proclamation.

Jacobson said the same thing. Weiler-Babb told me something along the same line after Friday’s game. These guys are determined to be remembered as winners in Iowa State uniforms.

There is still one game to go, but after this week, many of the frustrations of the regular season will soon be forgotten.

“We didn’t come here just to play one game and lose. We came here to win a championship and get a ring,” Wigginton, who finished with nine points against K-State, said. “I feel like we’re going to do that.”

In Thursday’s quarterfinal domination of Baylor, Iowa State played with more intensity than we’ve seen the entire season. The same thing carried over into Friday’s win over Kansas State.

While the Cyclones were struggling to score in the second half, they were forced to rely on their defensive presence to keep the game within reach. It came down to defending with a purpose, rebounding with ferocity and competing as hard as possible.

Basically, they had to beat the Wildcats at their own game.

“We just had to tough it out. We weren’t playing great on offense. We were getting stuck in the gaps and things like that turning the ball over,” Wigginton said. “We stuck with it and played great defense. We never gave up on defense.”

The Cyclones arrived in Kansas City with a point to prove. Many folks inside the fan base had written them off. As little as a week ago, I was starting to wonder whether or not they would win another game this season.

This team needed to prove its doubters wrong — including the other teams in the league.

“I think they question our toughness and things like that,” Haliburton said. “Kansas, I feel like they think our win against them was kind of a fluke win. We’re on a mission. We feel a little bit disrespected by some of these other teams out here.”

You can tell these Cyclones feel disrespected by their opponents by the way they interact with them on the floor. There is a heckuva lot more swagger in the eyes of every Iowa State player than there was two weeks ago.

They talk trash. They stare their opponents down after blocks and hold their shooting form high for the world to see after the ball goes through the net.

This team has a point to prove. On Saturday night at the Sprint Center, they will try to hammer the final nail into the coffin.

“We came in here really on a mission,” Haliburton said. “When they went on that big run, we told each other we’re not going to go out like this.”