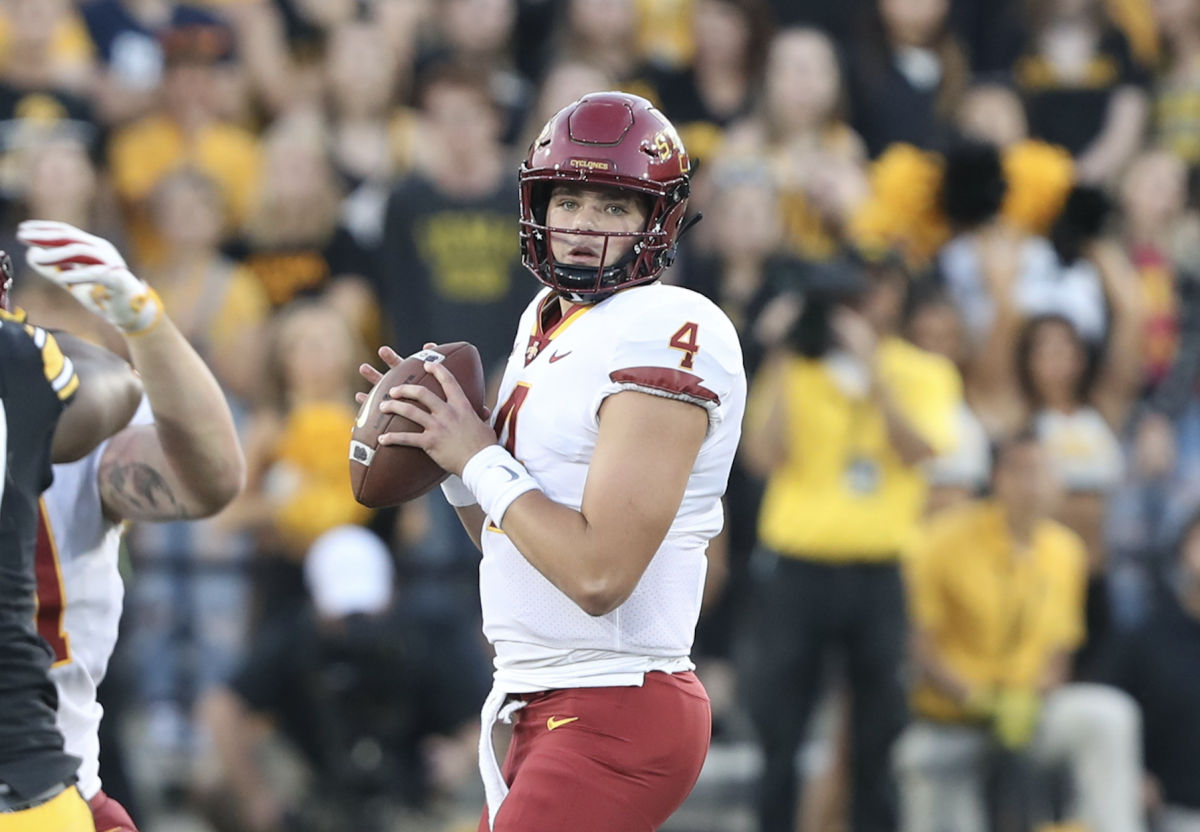 On the field, my favorite aspect of the annual Cy-Hawk game was also what drove me crazy about Saturday’s 13-3 Iowa State loss to Iowa.

I love the fact that these two programs play in conferences that in many ways are polar opposites to one another.

Which style wins out?

Iowa State tried to play like a Big Ten team on Saturday. With what Iowa State currently boasts up front on offense, it was a bad decision.

After driving down the field 71 yards (66 after a false start penalty) to start the game, like a frightened turtle, the Cyclones curled into their shell. Iowa State’s offense was essentially non-existent the rest of the way.

Upon reviewing the film, Iowa made a significant adjustment after that first series. The Hawkeyes spread their outside linebackers wider to attempt to take away the dink and dunks to the outside.

For the most part, Iowa State refused to challenge those linebackers with known playmakers and a quarterback whose strength is getting rid of the football in a timely manner.

Instead of trying to dictate which style of ball would be played, Iowa State played right into its rivals hands and stubbornly ran into the teeth of the Hawkeyes.

Across the board, there is no doubt that Iowa State is currently light years ahead of where it was when Matt Campbell took over this program. I still have a massive amount of confidence in the future of Iowa State football – as should you.

The Cyclones are on their way to being able to play an honest, man-to-man style of bruiser ball offensively, but this program proved on Saturday that it isn’t there yet.

On the bright side…

Iowa State might legitimately have the best defense in the Big 12.

Granted, Iowa didn’t exactly challenge the Cyclones in a way that many Big 12 teams (cough, cough, No. 5 Oklahoma) will, but watching Iowa State – primarily with a three-man front – hold Iowa and its two tight end sets to 2.92 yards per rushing attempt on Saturday was very encouraging.

What about the Mike Rose kid? Wow! Fantastic. It’s hard not to be giddy about those three linebackers playing behind the best defensive line we have seen at Iowa State in decades.

I got into a conversation with a pessimistic friend on Sunday about Iowa State’s record for the rest of the season. He was locked in on a 1-5 start and I get it. With what we saw on offense Saturday, I don’t blame a fan for thinking that way.

But this defense will likely give Iowa State a chance to win every game it plays in this season. And I’m sorry, but Matt Campbell didn’t forget how to coach offensive football overnight.

Where to go from here up front

We’ll get to quarterback in a minute…

This conversation has to start with the offensive line. It will be dictated on how these guys graded out (none good) on Saturday, but is anybody confident in the combination of Bryce Meeker and Sean Foster at tackle right now?

“I think we are a work in progress right now until we can settle in and really get into a groove,” Campbell said on Monday during the Big 12 teleconference. “I still think we are trying to pinpoint that. I think it’s unfair to say that we are set in stone and that this is where we are moving forward. There has to be some time for growth and development right now.”

Iowa State has to at least consider moving Julian Good-Jones back to left tackle. From the way Iowa State attempted to attack the middle of that Iowa line, I’m guessing that moving Good-Jones to center was a move for that game only – also to avoid starting a redshirt freshman (Colin Newell) in his first game at Kinnick Stadium.

Good-Jones is the best lineman on the team and left tackle is the most important position on the line.

Another option is one that I hate to even bring up, but how ready is true freshman Trevor Downing? It is at the very least worth pondering.

Having said that, I despise the idea of playing guys up front too early. We saw too many solid prospects wear down late in their college careers due to this exact problem during the Rhoads era.

Is senior Oge Udeogu capable of giving some snaps?

The good news here is that Iowa will probably boast the best defensive front-four that Iowa State will see all season.

What is it about Iowa State football that leads us to quarterback questions every year?

Campbell said on Monday morning that Kyle Kempt and Iowa State “dodged a bullet,” and that his injury is more day-to-day than season altering, so that’s great news.

Heading into game two, we’re still here having the quarterback conversation though.

The Sooners will be without standout running back Rodney Anderson on Saturday and for the rest of the season. Anderson, who tore his ACL in OU’s 49-21 win over UCLA, tallied 1,161 yards last year scoring 18 touchdowns along the way.

“That’s one of the things a bout being at Oklahoma, “Campbell said. “There are backups. There are guys capable of being the starter and being a big time guy. I don’t know if at that position it changes much as what they will do systematically.”

I just hate this for the Big 12. Oklahoma might be better than they were last season and while losing Anderson might not affect the Sooners immediately this weekend in Ames, that’s a big loss on the scope of the whole season and a possible run at a national title.

*** Oklahoma opened as a 17.5 point favorite over the Cyclones for Saturday’s 11 a.m. kick. The Sooners, who blew out Florida Atlantic and UCLA in their first two games, currently rank ninth nationally in points per game at 56 and fourth in points per possession at 4.31.