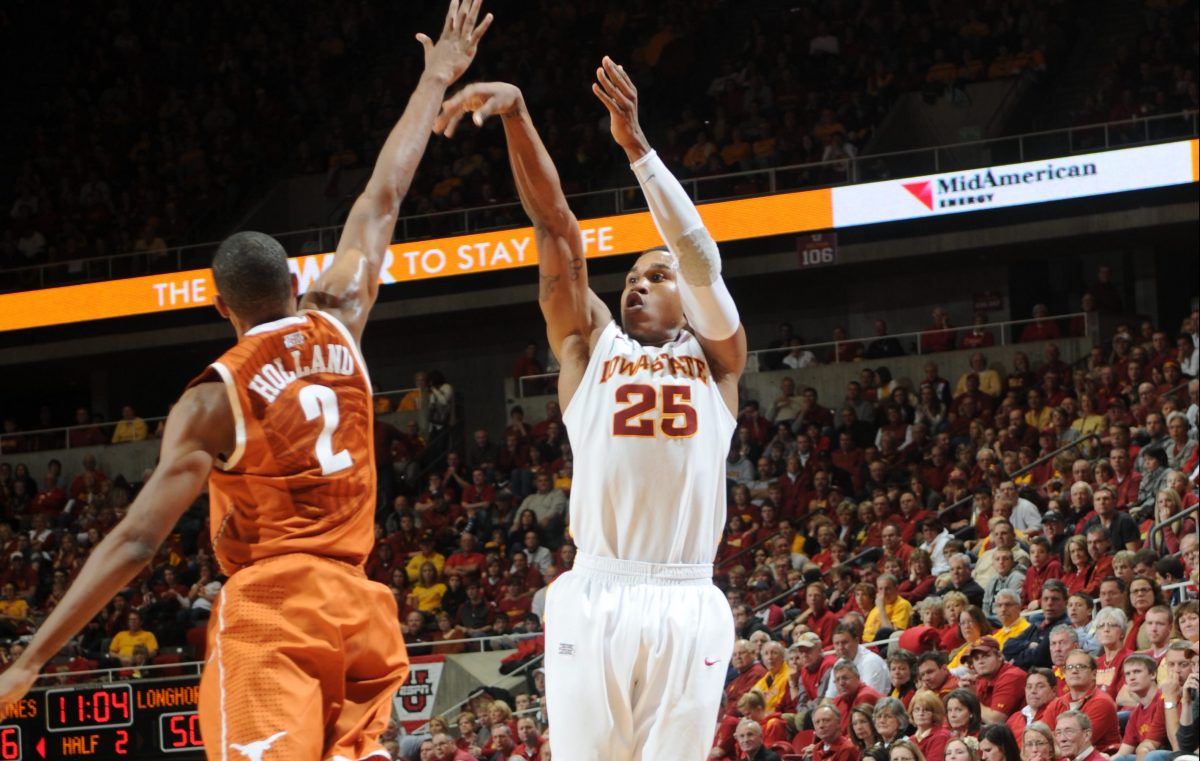 And the former Cyclone star, who I featured last week in a “Where Are They Know” spotlight piece, has found that knack for truth detection to be invaluable as he’s carved out a successful professional basketball career in Europe.

“I can tell who has your back,” said McGee, who’s playing hurt while winding down his third season of high-level hoops in Italy. “Not just the teams but the fans at Iowa State. Very supportive. (They’ll) always have a place in my heart. The fan support was unbelievable. It wouldn’t matter if we had bad games, good games, really bad games. You know, they were there no matter what. They changed the game when we needed it. They gave us energy. They give the players energy. They have me a lot of energy. There were times that I would be tired, but that energy you get from the fans, it just feeds you more. You just keep going. That’s what helps a lot of teams and players become better, because of the support. If you don’t have the support, you stay down and you be down on your teammates and people start pointing fingers. At Iowa State, no one pointed fingers. I don’t think to this day anyone points fingers at each other because they’ve got so much support.”

McGee’s fan favorite status has naturally translated well to German and Italian, but not so much to Turkish (more on that later).

He feels a sense of Hilton pulse through him whenever he rises up for a 3-point shot he’s certain to make — and everyone in the gym knows it.

“It’s good to be a fan favorite,” McGee said about 10 days ago from his current home in Tuscany. “I still feel that from college. When I catch the ball and I’m wide open, I can hear the other fans from the other team be like, ‘Aw’ — because they know I’m going to make the shot and I’m wide open. That’s just a great feeling because, ‘Oh, that’s McGee. McGee’s gonna make that for sure.’ You can just feel it, You can feel it. It’s not like — I understand Italian pretty good, I’ve been over here for a while, so it’s not like they’re trash-talking to me or anything. So it’s wonderful. Sometimes they even bow down to you and clap for you because you make so many in a game. Last night I made five. I shot two where I took probably one dribble past half court and just shot it in a clutch moment. It went in. Fans going crazy. It’s a different atmosphere.”

McGee said some fans for his former team, Reyer Venezia, were fickle. He teamed with fellow former ISU standout Melvin Ejim last season to secure the team’s first Italian League title in 74 years — and over Aaron Craft, to boot, but supporters in Venice would still change their tone in the stands seemingly on a half-by-half basis.

“Here where I play now, the fans are very supportive,” said McGee, who’s currently a sharp-shooter for Pistoia Basket.  “Very supportive. You can tell the difference. In Venice, man, we were down 12 points — the team I play for now, we were down against them last year, 12 points at halftime. The fans were throwing newspapers at us, booing us, everything. We came back and won by 15 points and they were telling us, ‘Ah, you’re the best, No. 1, this, this and this.’”

The man known as @T_Real25 on Twitter knows when the love is genuine.

He’s also been the target of frightening blind rage. That’s where the Turkish fans come in — and admittedly, it was a fight that stirred them up.

Ejim — and then McGee — stood in the middle of it en route to that championship last season.

“An American guy (playing for the Turkish team) elbowed Melvin in the head,” McGee recalled. “Melvin, he’s a little aggressive player himself, so you know the second person gets caught. Melvin didn’t get caught. He elbowed the guy back, so they’re pushing each other, going at it like some bulls, you know. Going at it. I’m watching. I just subbed out of the game. I’ve got other Americans on my team and I say, ‘Hey, watch Melvin. Watch Mel.’ One of my other teammates fouled this guy and the guy thought Melvin did it. Oh, man, they’re pushing and choking each other. So we’re on the bench watching. We’re on the bench watching and then this Turkish guy comes out of the middle of nowhere and just tries to choke Melvin, so I jumped off the bench. I ran out there. The whole team runs out there.”

That wasn’t the end of it. They had to play the same team two months later — in Turkey.

“I’m like, maybe this is going to die down, you know?” McGee said. “Everything will be all right. We fly to Turkey December 23rd and I get so many threats as I land. I turned off my phone, Turkish Airlines, at the airport. I turned my phone on and I had so many threats ,I had to tell the general manager of the team. I showed him‚ they were calling my all types of monkeys and stuff and they’re gonna kill me when they see me — and saying the same thing to my other teammates as well. Some of them were ignorant. They were replying back to them, just making it worse. I’m like, Listen, you’re messing with Turkish people.”

Lesson: Don’t do that. Ever. McGee intuitively knew that, so never chimed in on the Twitter fight.

Still, game time loomed. McGee’s team bussed to the arena rimmed by police escorts armed with automatic weapons. Everyone was on edge.

“Thee game is about to start and the fans are booing me, calling me all type of things — ‘Welcome to hell,’ things like that,” McGee said. “And that gym holds like 15,000 people. I’m telling you, the whole 15,000 people — that’s the only time I had the fans against me. They were saying, ‘F you, McGee.’ I played all right that game. I had 11 points. I could have done more, but I wanted to go. I wanted to go. I was like, ‘Hmm.’ And the coach, he was nervous too.”

Who cam blame him? Reyer Venezia fell behind by 25 points, but lost by only one and got the heck out of there.

But it still wasn’t over. They played the same team in the “sweet 16” of FIBA’s Basketball Champions League and escaped with a victory — and safe and sound.

McGee, it turns out, is well-suited for life abroad.

He loves the different foods and delights in various cultures. His girlfriend, Anca, is from Romania. They’ve been together for over a year.

“She speaks four different languages, so she kind of helps me out a little bit,” McGee said.

McGee’s chief language is basketball and as usual, he’s closing strong. He vows to come back to Ames for every basketball reunion and he expects to work on resurrecting his NBA dream this summer with the San Antonio Spurs.

“It’s crazy,” McGee said. “Small world. The guy that’s the recruiter for them, he played for the team that I play for now. He was the captain of the team. He was like the John Stockton of Europe. He was the captain of the team for 10 years and now he’s an NBA recruiter and I have a good relationship with this guy. … He gave me my MVP trophy (last offseason) and said, ‘Hey, don’t worry, you have an automatic invite this summer with the Spurs, so don’t worry, just continue to keep playing well.”

McGee has done just that. But with the season winding down, thoughts turn toward the future.

To family. To real love, not fake applause.

“My mom decided to be a cook at a local high school,” McGee said. “She’s doing that now. My brother he works for Wonder Bread in Tulsa, Oklahoma. My family’s doing good. I lost my uncle in January to cancer, so my team was very respectful and they let me fly home for two to three days and go to his funeral, but other than that, my family’s doing good and I’m taking care of my mom and my sister and my brother as well. Family, we’ve got to stick together.”

That’s true in Stringtown, Oklahoma, Ames, Iowa, or on another distant continent.

“I told my mom — my mom stays busy,” McGee said. “My grandma’s 91-years-old so my mom is always with my grandma, but I told me mom, ‘Before I retire from basketball, you have to come to Europe.’ And she said she will, so we’re gonna see.” 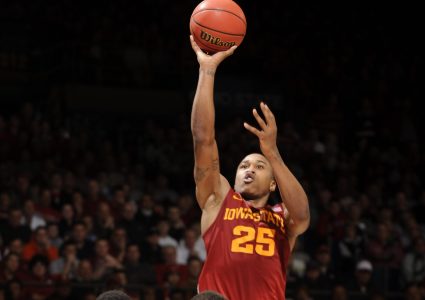 WHERE ARE THEY NOW: Tyrus McGee, Part I