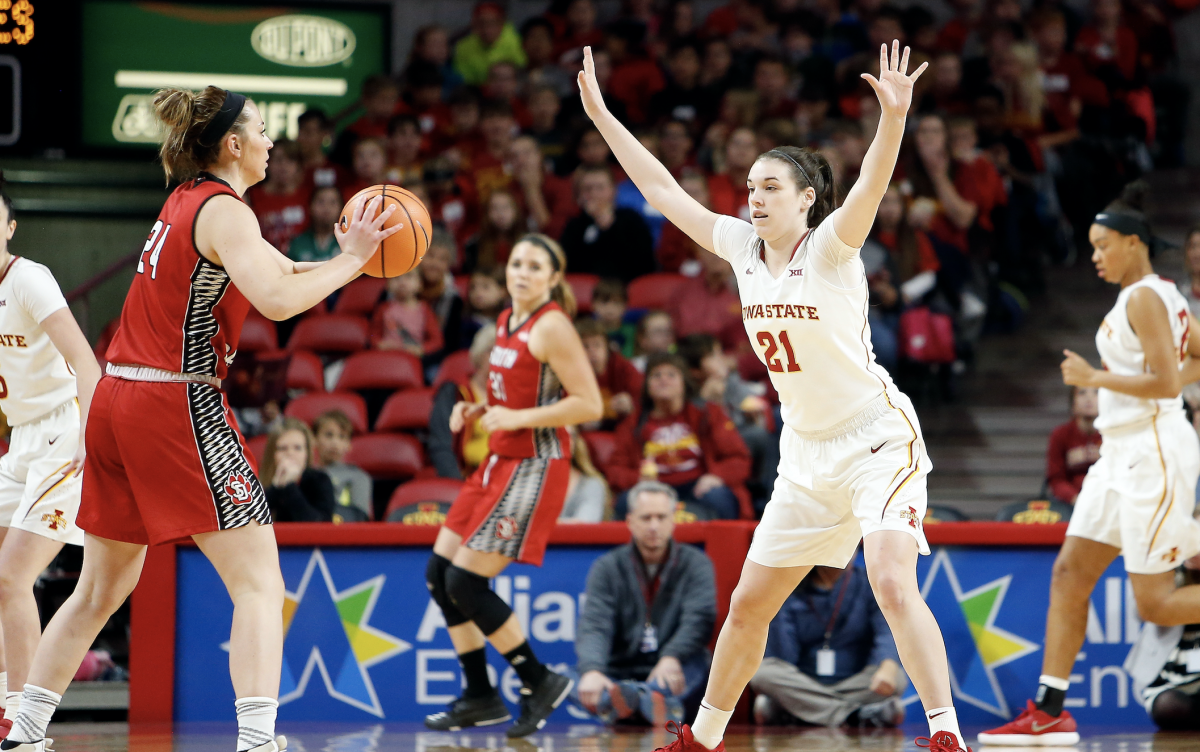 ABOVE: Iowa State’s Bridget Carleton scored 19 of her game-high 24 points to lead Iowa State to a narrow season opening victory over South Dakota.

AMES — Iowa State’s 81-76 season opening victory over South Dakota will be remembered as the Bridget Carleton show, but that certainly wasn’t the story early on.

Iowa State’s best player didn’t see a single minute of action in the second quarter and struggled to find a rhythm in the third as a physical South Dakota defense disrupted Iowa State’s offense. The deficit climbed all the way up to eight at one point, as veteran Emily Durr was injured and forced to sit out the game.

However in the end, Carleton did what she often does in the clutch, that’s get to the rim in the fourth quarter. She put the team on her back and ended the day with a game-high 24 points, with 19 coming of them in the final period.

“I thought in the fourth quarter it was kinda like one of those NBA games, get Bridget the ball, and get the hell out of the way,” said Bill Fennelly after the game.

Aside from Carleton, ISU was up-and-down offensively throughout. Madison Wise, Adriana Camber, and Rae Johnson all played big minutes down the stretch. With 42 seconds to go, Camber nailed a clutch corner-three that seemingly sealed the game, after only playing 14 minutes due to early foul trouble.

The Cyclones went away from team basketball at times and it hurt them, resulting in an uncharacteristic 22 turnovers. Fennelly said that he felt the ball got stuck too many times, which it led to illegal screens, three seconds in the key and other fouls that are often called early in the season.

Still, the Cyclones made 11 triples, their most in a game since December 18th of last year.

The team showed grit, fighting back to tie the game with nothing seeming to go their way.

“This is one of the all time favorite games I’ve ever been a part of,” Fennelly said. “You play freshmen 92 minutes, your point guard gets hurt, you’re in foul trouble, you’re losing, a great opening game.”

***  With the victory, Fennelly improved to a perfect 23-0 in season openers with Iowa State.

*** Coach Fennelly said the initial report is a hyperextended knee for Emily Durr and that more info will come later.

The Cyclones travel to Cedar Falls on Tuesday to play against UNI at 7.

WBB: Iowa State picks up in the pace in exhibition win