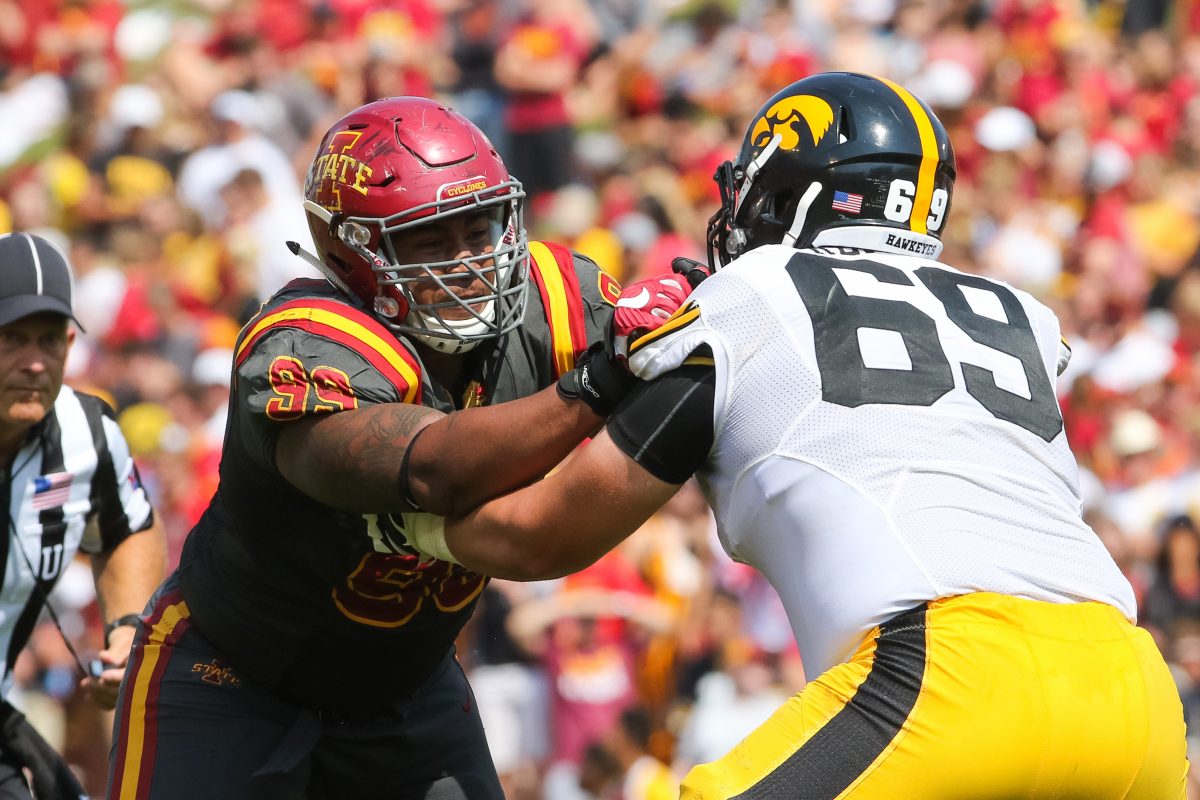 Then, he faced a long-dreaded phone call.

The cast had protected a broken left ankle he’d sustained during spring camp, though the pain lingered.

The phone call brought the awful news that his older brother, Jamoree Pray, had passed away after battling a terminal illness.

“He always wanted to play football but because he was always sick, he just couldn’t grow like that,” said Trent, a stalwart senior on the Cyclones’ vastly improved defensive front. “A lot of times when I’m on the field, I kind of think about how much he wanted to do it and he couldn’t do it. So I’m grateful for every opportunity that I get.”

Trent, a former standout at Forrest High School in Jacksonville, Fla., carries his brother’s memory with him, on and off the field.

The burly 6-3, 282-pounder doesn’t often mark up the stat sheet. Few defensive tackles do. But he’s as healthy as he’s ever been, despite the constant nicks, bruises and wounds that define lining up the brutal position.

It shows on the field, as Trent and newcomer at nose tackle, Ray Lima, provide push up front, occupy blocks to string out opposing running backs, and help create gaps for Cyclone pass rushers.

“Those two and I’d throw J.D. Waggoner in there too, are, when you talk about reshaping our defensive line room and really understanding work ethic and value really from last January on, those guys have really led the ship,” ISU head coach Matt Campbell said of Trent and Lima. “Getting Ray was certainly a great addition and his humility and those other two seniors’ leadership have been a really great combination to really start to infuse energy, confidence and leadership every day in that room. I think that’s why you see that group really starting to play good football.”

Through three games, ISU ranks 30th nationally against the run, allowing 107 yards per game. Improvement in all phases on that side of the ball remains very much a work in progress, but the D-line — long a liability for the Cyclones — is quietly emerging as a strength.

“Coming back this fifth year, I just feel like I’m at 100 percent and we’ve got young dudes on the team, but they’re hungry,” said Trent, who never felt truly healthy last season despite earning the starting job after a solid summer. “There’s not too much I’ve got to teach them that they don’t know already. And I love playing alongside them. I love them playing with me. Everything, it’s just like we say, ‘Move the rock.’ We’re really getting the rock moving right now and under this coaching staff, I just love everything about it. The way I feel about it, I just feel like we’re really getting it rolling right now.”

Lima rolled into Ames as a touted JUCO prospect this spring, but flew under the radar with his teammates early on.

“I learned a lot from Vernell,” Lima said on media day.

Now he’s playing like a veteran — thanks in part to Trent’s guidance.

“Ray’s quiet until you get to know him,” Trent said. “Let’s just put it like that. That’s human nature, when you get around a new crowd and you don’t know anybody, you just kind of sit quiet until you meet people. If you knew the Ray that I know? That’s all I’ve got to say.”

Trent said last season’s jarring emotional and physical challenges made him stronger as a person, player and teammate.

When he received the news that his brother had passed away last summer, defensive line coach Eli Rasheed was quick to offer his heartfelt support.

“Coach ‘Sheed was one of the first people to really comfort me — him and coach Campbell and the rest of the football team,” said Trent, who as a younger player looked up to talented, but oft-injured teammate Pierre Aka.

Rasheed had already instilled a deeper sense of togetherness in the defensive line, drawing the group together for cookouts, bowling outings and other bond-building activities.

Once the offseason arrived, players turned that somewhat manufactured sense of shared purpose into a tight-knit brotherhood.

“We weren’t really all hanging out with each other,” Trent said of then versus now. “It was kind of on and off, but he forced us to hang out with each other and it went from him forcing us to do it to we’re naturally doing it on our own. We don’t have to be talking about football. We could just be sitting around the house playing video games with each other, playing card games.

Unity on the football field is a fine thing. Unity off of it demonstrates something greater.

So when Rasheed faced an unimaginable tragedy in late July — the death of his son, Osha Southward, in a motorcycle accident — his players rallied around him and his family.

Trent said that’s simply what brothers do for their football “father figure.”

“I know he was going through a lot but we felt it for him, because we love coach,” Trent said. “I wouldn’t want to see anybody go through something like that, to lose a child. So we stuck by his side, kept our faith, and we were just praying for him. … He’s always prayed for us and kept the faith about us, and trusted us, so when the tables turned, it was our turn for us to be there for him.”

That’s true strength. That’s pure humility. That’s an iron-clad brotherhood — one that surmounts losses of all types, from the trivial to the heartbreaking.

“When something bad happens, you want the world to stop just for you, so you can get everything situated and try to figure out what’s going on, but the world keeps moving,” Trent said. “But like I said, this coaching staff, they understand. We’re humans. They were there for me 110 percent. They’re a big part of why I play the way I do right now to be honest. I really feel it.”