AMES — As Vlad Brodziansky sliced, diced and finished for 27 points, Solomon Young could only sit and watch. Iowa State’s emerging talent at the five spot played just three minutes in his team’s 84-77 loss at TCU almost five weeks ago.

Much has changed, though — mainly, Young’s playing time, comfort level and production.

“I think I’m just adjusting to playing overall, being out there,” said Young, who posted his first career double-double (18 points, 12 rebounds) in Wednesday’s 87-79 win over Kansas State. “I’m just getting a better feel for the overall game.”

The freshman’s maturation process clicked into high gear at the right time.

And Young will be front and center when it comes to Project Stop Vlad.

“I think it will be big,” record-setting point guard Monté Morris said of Young’s presence. “He didn’t play much down there. I don’t even know if he played, but we watched film and we were still sleeping out there. Our coverages were terrible, so I’m sure tomorrow you will see a whole different Iowa State team and we’re just excited to get things going and I’m ready to play against those guys, because we weren’t there, mentally or physically, that night.”

Morris was. He grabbed a solid four rebounds in Fort Worth, while dishing out eight assists to zero turnovers. Darrell Bowie — ISU’s only big man who saw more than three minutes of playing time — swept just one board off the glass in 19 minutes to action.

Young can help change that ratio this time around.

“Ball screen defense is important,” ISU coach Steve Prohm said about limiting Brodziansky’s effectiveness. “We’ve got to guard him collectively as a team. Too many easy baskets in the paint; everything was at the rim last game. So we’ve got to be much improved for us to win tomorrow. Solomon will start on him. If Merrill (Holden) gets in the game, he’ll guard him. Deonte (Burton) may have to guard him at times, but the biggest thing is we just can’t get in rotation, really spread out, to where he’s just getting easy buckets at the rim.”

Young plans to nix many of those chances. Any scoring that comes on the other end will essentially amount to bonus points when compared to the chief tall task on hand.

“Hopefully I can keep his scoring low,” Young said. “Go out there and play hard.”

That’s never an issue, though the Cyclones’ best efforts as of late have come on the road.

There’s the huge 92-89 upset at Kansas in overtime. ISU completed its season sweep of Kansas State in Manhattan. Tough-minded seniors such as Morris, Naz Mitrou-Long, Matt Thomas and Burton help explain how the Cyclones have won four Big 12 road games for the first time since the 2011-12 season — and two more away tests loom at Texas Tech and West Virginia.

But losing twice in conference play at home already? That’s a head-scratcher.

“Our focus has been better on the road for whatever reason,” Prohm said. “But I think these guys are excited. I think we played well against Oklahoma (in the last home game). I think we’re excited to get back home. Our crowd is amazing. That’s the one thing, the more you watch these games on TV and you see these other crowds across the country, it really makes you appreciate how special Iowa State is, because this fan base — this only happens like in about 15 to 20 schools, to have crowds like this every night. Just being realistic. So we’re excited to play well and I think we will.”

Few are more thrilled than Young, who suffered a hand injury in late November that plunked him deep on the bench — and into rehab — just as his ISU career was beginning. He called the setback “frustrating,” but considers the timing a blessing, given his burgeoning role for the stretch run ahead.

“We always push guys to be better and don’t settle under your ceiling, max it out,” Morris said. “He’s seeing that now and we’re happy with what he’s been giving us. We’ve got confidence if we throw it down to him on the block, he can make a play — whether it’s passing or scoring and also defending. So I’m happy for Solomon and this is just the beginning. He’s going to show a lot more as the season goes on.”

“I just go out there and try to make plays,” he said.

Everyone knows former Cyclones star and current Indiana Pacer Georges Niang is back in Ames during the NBA’s All-Star Weekend. He was not available to the media Friday, but Prohm spoke at length about one of ISU’s most beloved players ever.

“It’s great,” Prohm said. “I love Georges. He was great for me. I was very fortunate to coach him just the one year that I did. Hopefully we can get more guys in here like him. Not just as a basketball player, but in how they impacted this school and university, but love him, love his family. … The great thing about him and schools like this is he’s got an unbelievable appreciation and fire and love for this school.”

He said they text about once a week — about the games and other aspects of life.

“He does a good job of reaching out just to say, ‘Good luck,’ or, ‘Great win,’” Prohm said. “Like I said, (when) we beat Kansas, he was ecstatic and he was just as happy the other night when we played well. So it’s good to have him back and he’s great for me, he’s great for this university.”

Prohm foresees greatness at the next level for Niang, too.

“Georges is, to me, I think he’s going to be a 10 to 12-year pro at the NBA level, because of everything he brings to the table,” Prohm said. 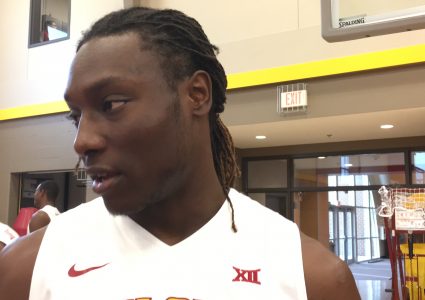