I should be in Houston right now but instead, I’m here in my Ankeny office writing about the offseason.

It is mail time, nonetheless. Let’s begin with a question on Iowa State basketball recruiting from CyNuts.

CyNuts writes: Any early word on the recruiting landscape and what direction Hoiberg might go with an additional scholarship to fill?

CW: After Clayton Custer’s departure from the program earlier this week, Iowa State now has three scholarships to fill this spring for the 2015-16 season. In recent years, we’ve seen Fred Hoiberg opt to bank one which in return has led to mid-year signings of Jameel McKay and Deonte Burton. Most of the time, I’m a big proponent of this strategy because we live in the transfer era of college basketball. It’s very common for guys to go through a week or two of practice with a new program, decide they hate it and move on. Iowa State has proven time and time again to be a safe haven for these types of guys.

However, I don’t think that Iowa State will go that route this offseason.

Programs rebuild. It’s part of the sport. But I think Iowa State sees an opportunity with at least two of these scholarships to stash ready-to-play transfers for a year and have them ready to play, start and hopefully go to another NCAA Tournament in 2016-17.

Of course, keep an eye on Cheick Diallo and his recruitment as well.

ILikeCy writes: What’s the scoop on Fred not wearing a tie this season?

CW: I have an idea but don’t want to speculate and be wrong. The next time Fred speaks to the media, I’ll be sure to ask.

DSMCy writes: Will we see Fred try to schedule more neutral site games in the future? Obviously this year’s team struggled in games with little to no atmosphere to feed off of.

CW: Here’s what I know about next year’s schedule. Keep in mind that it is March and this is still a work in progress. A lot of scheduling chatter goes down during the Final Four week every season.

Then, there is the Emerald Coast Classic over Thanksgiving weekend. Iowa State will play Virginia Tech in its opener and then the winner of Illinois and UAB (yes, that UAB).

There’s Iowa (in Ames) and UNI in the Big Four Classic (Des Moines). Iowa State will be on the road for the next two years in the Big 12/SEC Challenge (I think there’s a chance that the Cyclones could be sent to Rupp Arena next year for what it’s worth.).

That’s all I know for now. Stay tuned.

MNclone writes: Will next year’s team be "desperate" to make a deep NCAA run? If so, is that a good thing?

CW: If that UAB loss didn’t sting then that’s a major problem. I was in the locker room after the game. Trust me, it stung. I fully anticipate the Cyclones to be “desperate” all offseason long.

Here’s the thing about next year…I’ve covered Iowa State athletics for over 10 years now. Never, ever, in my career have I entered a season thinking that Iowa State has a chance to win a national title – not even this basketball season. I thought that this team could make the Final Four, sure, and I guess if you do that you have a chance. But I didn’t see this group being able to string enough wins against great teams together to be able to pull it off.

But next year’s team? With the experience and talent coming back, if enough things go right and matchups lean Iowa State’s way in the NCAA Tournament, there is a chance.

Having said that, some things need to lean in Iowa State’s direction. A solid offseason of recruiting, complete recoveries from Darien Williams and Hallice Cooke and player development are only a few of those things.

Gogagig writes: Was the Big 12 overrated this year?

CW: It depends on what metric you value the most. If the NCAA Tournament is that, then yes.

That isn’t the case for me though. I mean, does anybody out there really believe that Georgia State and UAB are actually better teams than Baylor and Iowa State?

However, there’s no denying that the league didn’t perform well when it mattered most this year. The NCAA Tournament is all about matchups so every year, some leagues look worse than they actually are and many look better. This is nothing new.

I think you have to factor in what happens in the Dance, yes, but I don’t think it is the be all, end all either.

ruxCYtable writes: I’m excited, as many are, for 15-16. The true Cyclone in me is telling me to temper my enthusiasm because something will happen to screw it up. I guess what I’m asking is, in your opinion, is Custer’s departure going to be the only surprise for this off-season?

CW: No. I’m not sure what the other(s) will be but in the year 2015, stuff happens. I fully expect more good and not-so-good surprises to occur between now and October.

AdamJGray writes: Would you rather wear sweatpants at the next Iowa State media day or get a Scott Drew tattoo on your lower back?

CW: Both sound like hell to me but there’s no question that I’d lean sweatpants. That’s a one-day deal. Having Scott Drew inked onto my body is something I’d have to live with for the rest of my life.

PFlatts writes: Football predictions? What are you most excited to see this fall?

CW: I’d say I am extremely cautiously optimistic about the offense. But until I see an Iowa State offense move the ball consistently and explosively, I just won’t trust it.

However, the Lazard/Bundrage/Montgomery combo at wide receiver gets me pumped up for sure.

I have heard great things about Demond Tucker so far this spring, so that’s a good thing.

I just don’t trust that offensive line yet.

CyArob writes: Are the betting lines available for the UNI game yet? If not, do you think ISU will be favored? But seriously, we’re going to beat UNI right? Right?

CW: My guess is that if the line were to come out right now, Iowa State would be something like a two-point favorite. Having said that, I know next to nothing about UNI at this point in the offseason.

I have no clue on if Iowa State will win. I’m done making football predictions. 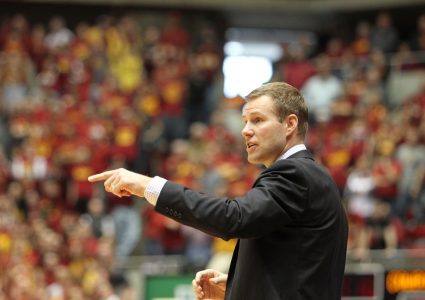