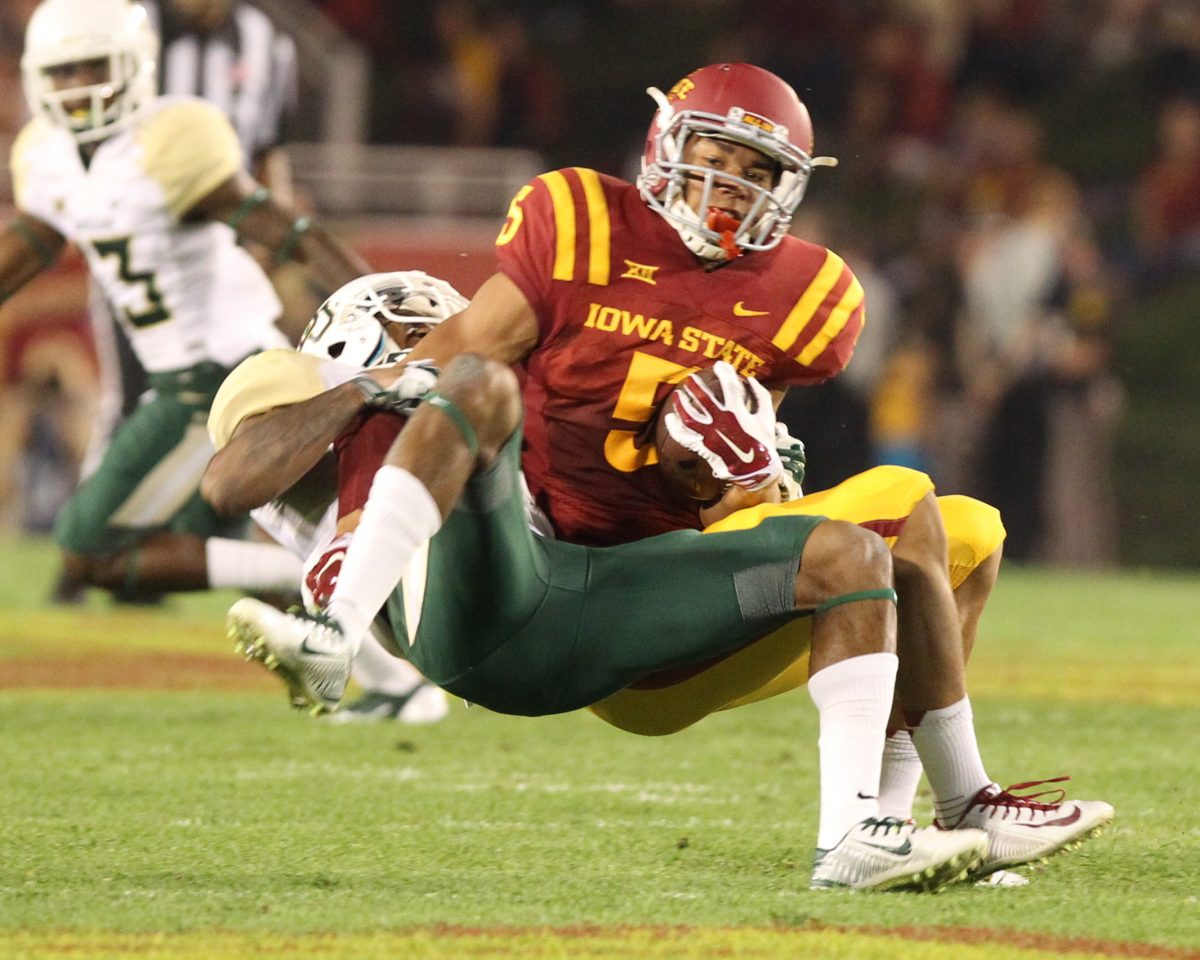 It is kind of an odd feeling. Even if moral victories were being chased, the Cyclones performance against Baylor would not qualify. It was well known before the game that Baylor was the far better team with superior talent and that was only confirmed in Ames on this past Saturday night. But it felt weird. It felt like the game was close but it never really was, especially as Baylor continously built on their lead throughout the second period.

Baylor was dominant on offense, yet Iowa State was hanging around while playing very poorly on offense. It was a near duplicate performance to 2013, though tamed down a bit. I harped on it all last week, but Iowa State’s first three possessions were three plays and a punt. They finally countered with a touchdown to trim the Baylor lead to 14-7 in the first quarter. The defense even responded with a stop and the offense was in business to knot up the scoreboard. After a first down and the break between the first and second quarters, Sam Richardson threw a left-handed interception that was a pretty awful idea.

The second quarter was all Baylor as they scored 21 unanswered points and the Cyclones next four possessions after the interception were three and outs on three occasions. The other drive was five plays and a punt. A team just cannot survive against an offense like Baylor’s without some semblance of support from their own offense. That was again proven on Saturday night.

The Cyclone defense wasn’t much match for the potent Briles offensive attack, but they did provide more of a speed bump to Baylor than they had seen so far this year.  In the last two games, when Baylor was still trying they had racked up 105 points on 20 possessions. That’s touchdowns on 75 percent of their drives. That is impressive if it is against the Milford School for the Blind’s junior varsity squad.

One thing that gets bandied about more than I approve is the theory of being impressed by a team not quitting and not putting their tail between their legs when the going gets tough. There are times where that is an apt statement, but by and large I don’t think guys should be applauded for what is an everyday expectation. Continuing to fight against the odds is noble, but it is expected. It is the norm and the baseline so there is no reason to praise effort in most cases.

All of that said, this isn’t about praising effort this is about praising the responsiveness. After a disappointing first half, the offense came out and got to work. Sam Richardson busted a 47-yard run for a touchdown and the lead was trimmed to 21.

That 21 point spread isn’t a moral victory but when looking into the history of Cyclone football, it is pretty much right in line or slightly better than the average ISU performance against a top seven team. Since 1960, the Cyclones had played 66 games against top seven programs (with a record of 4-60-2) and the average final score was a defeat of 38.3-11.6.

Looking at more recent history and just considering the Big 12 time frame that started in 1996 and things are actually worse. Seventeen times since 1996 the Cyclones had been pitted against a top seven team (ISU is 1-16 in those games) with the average score being in favor of the opponent, 43.7-15.8. Yes that margin is bigger than what we saw on Saturday. Is it worth anything? Nope. Does it add a tiny bit of perspective? It does for me.

The Cyclones attempted to capitalize on the momentum with a surprise onside kick that appeared to be there for the taking but not quite executed. Baylor scored on the short field but again, the Cyclone offense responded. Another touchdown for the Cyclones and again the lead was trimmed to 21 with seven minutes to play in the third quarter.

It was then that Jack Trice was going absolutely freaking nuts. A 21 point deficit is almost always insurmountable but against an offense like Baylor’s that is even more true. With seven minutes remaining in the third quarter, Baylor took the field and I could not believe how loud the place was. The defense forced a three and out and imaginative minds began to wander – or at least mine did.

We all know the offense couldn’t capitalize and Iowa State would get no closer in the scoring column the rest of the way, though each team would register one more touchdown. But that fan presence in that situation cannot and should not be forgotten. It was similar to what we’ve seen so many times in Hilton Coliseum when the fans try so hard to will the team to victory even when things to that point have gone terribly.

It makes the next stat that has been on the forefront of many of our brains since the middle of 2013 all the more puzzling. Why can’t the Cyclones win at home? Since the fourth game of 2012 (14 games at Jack Trice Stadium), the Cyclones are just 2-12. If you jump forward a few games to after the Baylor game that year ISU is 1-10 in their last eleven home games.

I went back to try and compare that to previous Cyclone dry spells and came up surprisingly empty handed. There were only three more comparable strings of mostly losses of at least 10 games (and two of them are overlapped to essentially one string). Below is the record in the given stretch, ranked opponent facts, ISU’s record away from home in the given stretch, and attendance numbers.

First off, the current stretch is the worst winning percentage for a stretch of 10 games or more that I could find. The percentage of games versus ranked teams is pretty even across the board but this stretch has seen ISU far more successful in other venues than in the other eras. But perhaps most puzzling is the last column with the average attendance numbers. The fan support in the past three season with these games has been as impressive as we’ve ever seen in Ames.

So, what gives? I really don’t know. I think it is mostly a result of not beating teams that you should. You know, like the FCS teams on the schedule. But the other item of note is that the average score has the opponent winning by eight points and six of the last 10 home losses were decided by one possession. There have been some games ready for the taking that simply fell through the cracks.

We remember the Kansas State game from this season but also the TCU game last year that was lost on a last minute touchdown. Texas? Yeah, you remember. West Virginia at the end of 2012 was crushing as was Kansas State circa 2012.

But football isn’t an exercise of horseshoes and hand grenades where “close” goes in the win column. There have been so many games with the Cyclones knocking on the door for wins in this rough span of home games that it is amazing they haven’t won more often. Especially with the relative success they’ve had on the road when compared to ISU teams of year’s past.

It wasn’t a moral victory, not even close, but so much was reaffirmed to me. One of those things may have been the large gap between Baylor and Iowa State. It was a game that never felt close but there were so many opportunities that ISU just missed that could’ve put it more in doubt. The fans once again showed up, but again there was no reward.

Call me crazy but this still appears to be a team that is gritty and getting better as we go. We knew the first portion of the schedule would be tough to work through but when the opportunities for wins start to present themselves they will have to be capitalized upon. Because only so much improvement can be tangible while you’re still losing games more often than not.

I personally think we’re on the cusp of that success.