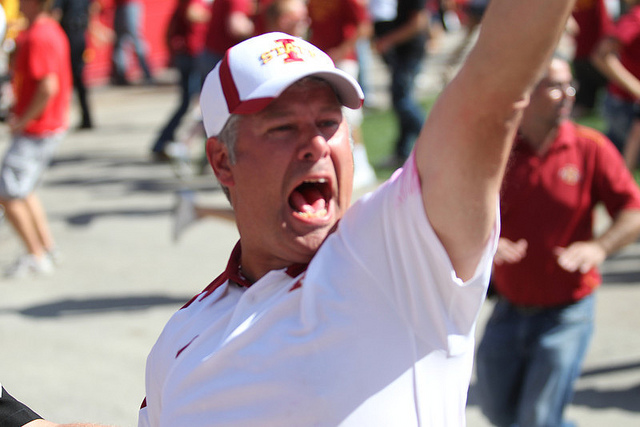 Say what you want about Iowa State’s 3-9 record in 2013. It didn’t go the way that anybody had planned. But through it all, Paul Rhoads’ team never quit.

That is exactly what happened on Saturday via a colossal comeback and 52-44 triple-overtime victory over West Virginia. After going down 17-0 early, the Cyclones trailed the Mountaineers 31-7 in the second quarter. Iowa State outscored Dana Holgerson’s crew 24-7 in the fourth quarter alone to claw its way into overtime.

It was a team win, but redshirt freshman quarterback Grant Rohach gets the game ball. After a rocky start, Rohach completed 25-of-39 passes on the day for 331 yards, four touchdowns (to one interception). Rohach also ran for a 54-yard touchdown.

The comeback really caught fire with a 99-yard touchdown drive late in the fourth quarter that took 4 minutes and 25 seconds. Counting that drive, the Cyclones scored at least a field goal on its final seven possessions in the comeback (including overtime).

Iowa State accumulated 575 total yards in the game, with 331 coming through the air and 244 on the ground. Senior running back Shontrelle Johnson closed out his career as a Cyclone to lead Iowa State with 72 yards on the ground and a touchdown.

The defense most certainly did its part too. Wally Burnham’s crew forced four West Virginia turnovers in the game.

Check out CycloneFanatic.com later this evening and tomorrow for more analysis on the big win.