Iowa State will play 11 home matches during the season, including two Saturday matches at 4 p.m. CST against conference opponents. Two home matches will begin at times to be determined based on a Cyclone football home game on the same day.

The Cyclones begin the season on the road at North Dakota for three matches against South Dakota State, North Dakota and Texas A&M, who lost to the Longhorns in the second round of the 2012 NCAA Tournament. A contest at Northern Iowa, another tournament team from a year ago, ends the four-match road trip to start the season.

A road trip to Nebraska for the Ameritas Player’s Challenge, Sept. 12-14, will test Iowa State who will face 2012 tournament teams from Dayton, St. Mary’s and Nebraska. Iowa State defeated the top-ranked Huskers last season in Ames but is unfamiliar with Dayton, whom Iowa State has not faced since 1996, and St. Mary’s, a first-time opponent. Times for the tournament’s matches have not been announced.

Iowa State closes the bulk of its non-conference season at Iowa in the Iowa Corn Cy-Hawk Series match on Sept. 21. The Hawkeyes pushed the Cyclones to five sets last season at the Iowa State Challenge, but Tenisha Matlock’s career-high 20 kills led Iowa State to the 3-2 win.

The team returns home to open the conference season against Baylor on Sept. 28 before taking off for Texas Tech and Oklahoma. After hosting Kansas State and West Virginia, the Cyclones play back-to-back road matches at Texas and Kansas, two of the squads to defeat Iowa State on the road last season, both matches going five sets.

October ends with home contests against TCU and Texas Tech, and the Cyclones take to the road against Baylor before breaking from conference play for a meeting with South Dakota at Hilton on Nov. 5. Four days later, the Cyclones are back on their home court for a match with Oklahoma before traveling to West Virginia on Nov. 13.

The last two weeks of the season include road trips to TCU and Kansas State, for the Wildcats’ final home match of the season, and Iowa State will host Kansas and then close out the home season on Nov. 27 by celebrating Senior Night against the Longhorns, whom Iowa State defeated in the 2012 regular season finale.

The NCAA will announce the tournament pool on Sunday Dec. 1 before first and second round play begins at selected sites,Dec. 5-7. NCAA Regionals will be played Dec. 13-14 for the chance at spot in the NCAA Tournament Championship, Dec. 19 and 21 in Seattle, Wash.

All times listed on the schedule at cyclones.com are central and are subject to change. 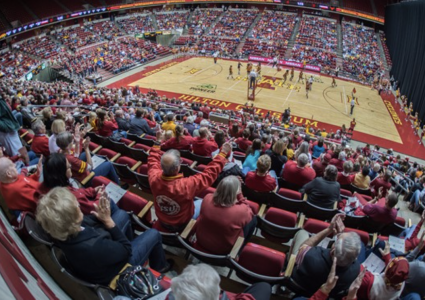