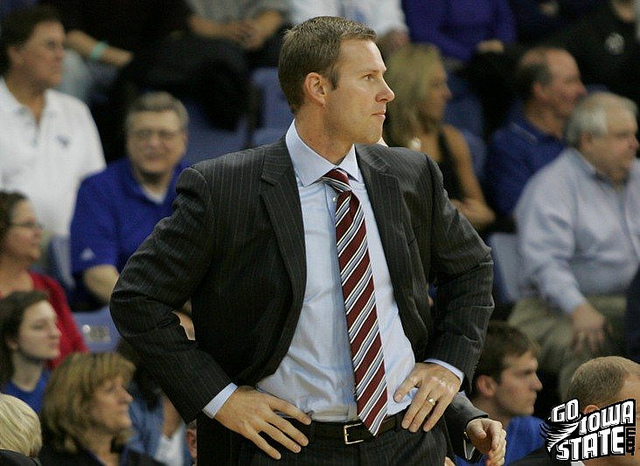 Royce White only attempted one shot. The Cyclones were out-rebounded 36-25.

Iowa State went on the road and made a school-record 15 3-pointers in a conference game while defeating Oklahoma 77-70 on Saturday, improving its Big 12 mark to 7-3 on the season.

Ejim was rock solid for Iowa State, going 7-for-13 from the field and 2-for-4 from beyond the arc.

He’s been coming along over the last few weeks and Ejim, who often gets overlooked by the flashier Cyclones on the roster, deserves the hardware for this win.

Seventeen – Iowa State now has 17 wins on the season. Last year, the Cyclones won 16 games overall. Number 17 snapped yet another nasty streak for this program as well. Before Saturday, Iowa State hadn’t won a game in the state of Oklahoma since the year 1996. Head coach Fred Hoiberg was a rookie for the Indiana Pacers at that time.

To the God of hair, please give this man some "great" hair days more often.

All joking aside, there’s an argument that can be made  for Chris Babb being Iowa State’s MVP this season. Now of course, this hypothetical award would have to go to Royce White, who leads Iowa State in scoring, rebounding, assists, blocks and steals.

BUT, Babb’s defense has simply been priceless. Night in, night out, Babb is asked to shut down the Big 12’s best scorers. Oklahoma’s Steven Pledger got hot late in this game, but Babb still held the same man who dropped 38 on the Cyclones last season to a 5-of-14 performance with 14 points. Not bad at all.

Shoes – Babb had a "great hair day" on Saturday. Royce White had a bad shoe day.

The big man’s shoes literally broke during warm-ups. Luckily, the generous Oklahoma basketball program loaned White a pair of theirs. That meant that White’s kicks were Oklahoma colors and he matched the rest of the Sooners on the floor. That was a fine gesture on the part of Oklahoma. That gets them in "Three Up."

Oh there’s more do do with sneakers here.

Chris Allen rocked a pair of grey kicks on Saturday. They were siiick. Gets him in "Three Up" too.

— ESPN 2 color commentator Jalen Rose made a great point late in Saturday’s game. A lot of times when a star player is struggling to score, he starts forcing bad shots and eventually hurts his team in the end. That was absolutely, 120 percent NOT the case on Saturday with Iowa State’s Royce White. As I noted in this blog’s intro, the big man only attempted one field goal in the game, scoring three points with seven assists and four rebounds. The more I cover White, the more fascinating he becomes as a basketball player, and a human being.

— Heading into today, conventional wisdom told us that Iowa State would NOT win both games in its Oklahoma swing. But really, can you really bet against the Cyclones heading into Tuesday’s matchup with Oklahoma State?

Rebounding – Oklahoma 38, Iowa State 29 . More specifically, Oklahoma grabbed 12 offensive rebounds compared to four by the Cyclones. When you make 15 3-pointers though, things like this happen.

Snow cone – Iowa State had its mojo working in the second half, when some little kid apparently spilled his snow cone on the court. No really – It happened. In the Cyclone Radio Network’s postgame show, John Walters referred to it as "the old snow cone trick."

Good times. Not only is Walters "The Godfather," he’s one sly fox.

It’s on the down list, but the way Iowa State didn’t miss a beat after the 10-plus minute delay was impressive.

I still think that kid was Lon Kruger’s grandson…

What really matters though are the numbers 77 and 70. That is all.