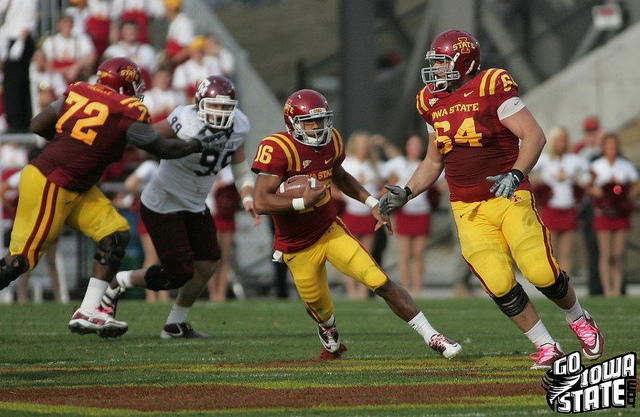 Turnovers/QB Play – I wish I could write that this was the first time Iowa State struggled with turnovers in 2011.  Rutgers did play well on defense and forced Iowa State to make mistakes, especially when it came to the decision making of the quarterbacks.  Jared Barnett fumbled once on a play where he arguably held onto the ball too long and Steele Jantz made a couple bad throws. This may seem like a small number of plays but to give a team like Rutgers three more opportunities to score is hard to come back from.  Also, it just seemed as the game continued that it was nearly impossible for these quarterback’s to find a rhythm and continue to hit receivers consistently. Towards the end of the game, the Cyclones were moving the football but this was largely because Rutgers was in a safe defense and wasn’t bringing the pressure that haunted this offense all afternoon long. Along with the quarterback play not being great, the offensive line didn’t play well either. Too many times, offensive line and quarterback communication was not there and it ended up in hurried throw or a sack. The Cyclones simply didn’t seem to have an answer for the speed and aggression that the front seven of Rutgers brought to the table.  Many will argue as to why Jared was pulled and Steele was inserted into the starting lineup and it’s simple as this. Coach Rhoads felt that Steele was the best option for this team. Regardless of the quarterback, there was little consistency at this position all night.

Rutgers Offensive Ability – Before this game, I thought that the Cyclones would be the aggressor. However, that simply was not the case.  I underestimated the ability of Rutgers wide receiver Mohamed Sanu as a player. He is a more physical presence and will be a very good NFL player when things are said and done. Looking back before the game, you saw a Rutgers team that only averaged 91 yards per game on the ground. They exceeded that tonight by rushing for 173 yards. That’s not to mention the outstanding play of MVP Jawan Jamison, who had 27 carries for 131 yards and two touchdowns.  I was also very impressed with the play of Rutgers’ quarterbacks, not by only how well they played but the timely placement of both of these players within the offensive scheme. It seemed as if they didn’t make any mistakes when each of these guys were in, kind of subliminally, Rutgers’ offensive coordinator Frank Cignetti knew that either Dodd or Nova would be hot on a certain drive.

Rutgers’ Defensive Ability – This in my mind was the only thing I was severely worried about looking at this matchup, besides turnovers of course. Rutgers’ defense was as good as advertised. This defense forced three turnovers, held the Cyclones to 91 yards rushing and made Iowa State’s offense very uncomfortable. This Rutgers defense brought a lot of man pressure, which forced Jantz and Barnett to check into short man routes to try and get some rhythm as an offense.  Once Rutgers began to see Iowa State checking to “man beaters,” they would check themselves into a zone defense at the last second which confused our quarterback’s. That made it challenging to be efficient while throwing the ball all afternoon long. The confusion and pressure this defense brought ended up being too much for the Cyclones.

Offensive Play – This Cyclone offense became stagnant once again while trying to move the ball consistently. The Cyclones didn’t reach the red zone until the fourth quarter. You have to score to win and with no big plays being added to this equation, that meant no points for the Cyclones.  Also, Iowa State was only 2-for-13 when attempting to convert on third down.  Ironically, Rutgers was too, however they didn’t turn the ball over and when they got into the red zone, the Scarlet Knights were 4-for-4.  Again, this offense had zero to little rhythm from the second quarter throughout the remainder of the game.  The Cyclones could have helped themselves more by being more efficient on first and second down, which would have made things easier for Tom Herman on third and long.

Missed Opportunities/Points Left – Iowa State left 16 points on the field.  There was the incredible kick return by Jarvis West where there was a questionable holding call made on Tyler Leo.  That however is a glimpse into the future at what Jarvis West is capable of as a return man.  Regardless as to if it was a hold or not, a huge shift in momentum was given back to the Rutgers sideline.  The Cyclones had miscues on two field goals.  The first was a high snap from Dakota Zimmerman that holder Brett Bueker had trouble getting to. The end result was a bad hit off of Zach Guyer’s foot.  The second was a blocked field goal with that looked like Guyer didn’t get enough air under the ball.

Overall, the Cyclones aren’t proud of this performance that ends their season with a record of 6-7. A losing record is unacceptable for this team and Coach Rhoads spoke to that in his postgame press conference.  However, this program is headed in the right direction and if this season’s performance isn’t a testament to that, than I don’t know what is. 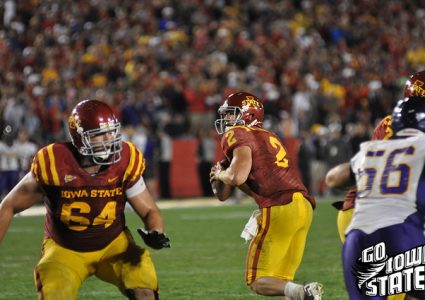