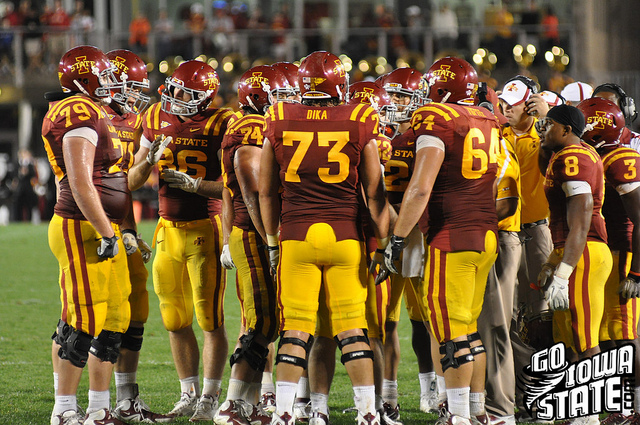 Tired of being pushed around by Iowa, the Cyclones fought back on Saturday. On a day when most expected the Hawkeyes to win the battles up front, it was Iowa State who took control of the trenches.

Second to Steele Jantz’s unbelievable play, the Cyclone offensive line was nearly as instrumental in pulling off a 44-41 victory in triple-overtime.

“We played with a chip on our shoulder,” left tackle Kelechi Osemele said. “Coach (Paul) Rhoads challenged us at the start of the week and said this game will be won in the trenches. He felt like we got beat up front the last two years and that’s why we lost those games. Obviously, we took that personal.”

The Cyclones allowed only one sack and continually beat Iowa’s defensive line at the point of attack. Iowa State racked up 194 yards rushing, including 108 from ShontrelleJohnson who averaged 6.0 yards per carry.

“I thought our offense had good timing today, I thought they played pretty well today,” Rhoads said. “When the game was on the line and fatigue was becoming a problem, I thought we were the strongest.”

Fittingly, on the winning touchdown, the Iowa State offensive line cleared plenty of space for James White to scamper into the end zone.

With the way Iowa State’s offense was rolling, all it took to seal the victory was one key stop. In the third overtime, the Cyclones stood tall and held the Hawkeyes to a field goal.

Game-set-match with Steele Jantz at quarterback.

“We needed a stop to give our offense a shot to win the game,” linebacker Matt Tau’fo’ou said. “That’s how it felt. We were all trying to do our jobs.”

The Cyclones gave up 41 points, but that number is misleading because of the overtimes. The defense did its job to keep Iowa State in the game, especially when the Cyclones trailed 10-0 early.

Iowa running back Marcus Coker ran for 140 yards, but it came on 35 carries. James Vandenberg threw for 207 yards, but he never fully found his rhythm against a surprisingly good Cyclones pass rush.

“Everybody play so well today,” linebacker Jake Knott said. “Everybody was bringing it.”

While the final score is all that really matters, the Cyclones nearly cost themselves a chance at victory with turnovers and penalties. Twice Iowa State fumbled inside the red zone, and lost three fumbles total.

The Cyclones were also flagged for 11 penalties worth 84 yards.

Luckily for Iowa State, it was able to overcome those mistakes in the end.

Paul Rhoads loves coaching Iowa State football – there’s never been any question about that. It showed again on Saturday.

After the thrilling win, Rhoads went to the student section and the band to deliver his trademark fist pumps. The crowd went nuts as Rhoads hugged almost every stranger in his path back to the locker room.

Jake Knott on Steele Jantz“I’ve been chasing (Steele) around for long enough. (The Hawkeyes) can have a little taste of what me and the rest of the defense go through. He’s deceptively fast. You really don’t think he’s running that fast, but he is running extremely fast. He’s just so smooth in everything he does.”

–       Aaron Horne continued his stellar play for the Cyclones. He caught four balls for 94 yards.

–       The Iowa State secondary did an excellent job on Iowa’s Marvin McNutt. The senior had only four receptions for 61 yards a week after racking up 140 yards and two touchdowns last week. 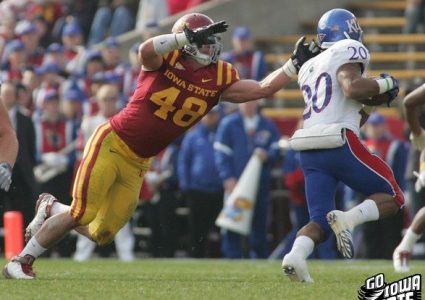 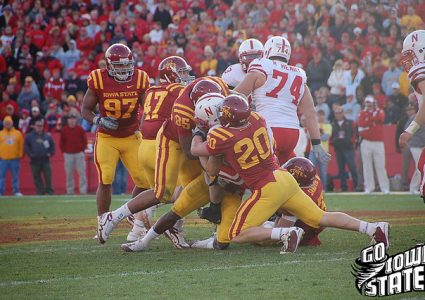