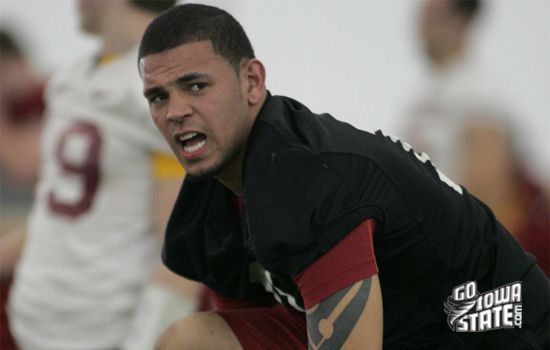 As expected, Austen Arnaud’s season-ending knee injury was the hot topic during Paul Rhoads’ weekly press conference that was held on Monday morning. Without their leader, the Cyclones still have a game to play on Saturday when 15th ranked Missouri comes to town. It’s a big one too. A win would send Iowa State to a bowl game for the second year in a row. A loss would end the season. Below are a few highlights from today’s presser. You can listen to the entire press conference by CLICKING HERE.

Ready or not, it is Tiller time

Expect a very focused Jerome Tiller to take the field on Saturday night against Missouri. I’ll guarantee you one thing. Tiller isn’t going to be annoyed by the media this week. Rhoads has shut Tiller down to reporters to enable him to focus on football and nothing more.

“He has enough on his plate,” Rhoads said. “I made that decision to allow him to remain completely focused on the preparation that needs to take place.”

For the first time this season, Tiller, a redshirt sophomore, is sitting atop of Iowa State’s depth chart at quarterback. During his press conference, Rhoads told a story about Tiller’s reputation around the Big 12. This compliment came via Baylor head coach Art Briles at the league’s media days that took place in August.

“Art Briles asked me who I brought. I told him,” Rhoads said. “He said ‘Jerome Tiller?’ I said that I brought my quarterback with me. “He has a lot of respect for Jerome and what he is capable of doing because he saw that last year.”

In that 24-10 Iowa State win last season, Tiller came in to relieve Arnaud, who had just injured his hand. Tiller torched the Bears, going 7-for-8 through the air while rushing for 80 yards and a touchdown.

“They present the same skills, they just accomplish them in a little bit different fashion,” Rhoads said of his quarterbacks. “Austen runs hard. He is a physical runner and he drops his shoulder. Jerome likes to make people miss but it’s the same running plays and the same passing plays that we will execute.”

The status of Iowa State’s starting right tackle Brayden Burris (bruised leg) will be something to watch as the week rolls along.

“He is still sore today,” Rhoads said. “We’ll try to get him out there and practicing tomorrow. He’s having a tough time pushing off of that leg. X-rays are negative. He should respond. We do expect him to be out there come Saturday.”

In one other injury note, wide receiver Josh Lenz (groin) is expected to practice on Tuesday.

End of an era

Here’s something to think about when you’re watching Iowa State’s Senior Day festivities on Saturday night. These seniors are the last men standing from the Dan McCarney era in Ames. Not all, but most of them have experience three coaches during their time at Iowa State.

“What is so important to me is how they embraced myself and our staff,” Rhoads said. “They’ve done it with no reservations. They have approached it full speed. They have done the things we have asked. They have led in great fashion and they’ve had success because of that. Everybody in this program would like nothing more than to send them out with a win in their last game at Jack Trice Stadium and give them one more opportunity to play on a national stage.”