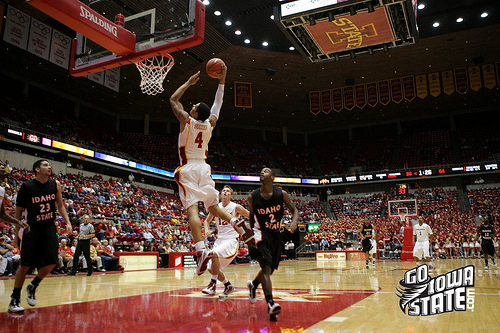 Happy Final Four weekend Fanatics! I thought that I would pop in with some thoughts on tonight’s national semi-final games and games and just a little bit more.

This past week has been a fun on for me. I’ve been filling in for Jon Miller on 1460 KXNO’s Miller and Deace in the Morning. It has been very intriguing for me to be able to sink my teeth into some non-Iowa State sports topics, specifically the Final Four.

I will give my thoughts on that event in a moment.

I want to start with a few notes on the recent interview I conducted with Iowa State’s soon-to-be senior guard Charles Boozer. There is a reason why Boozer is arguably the most popular player on Greg McDermott’s roster.

It’s because fans can smell a phony from a mile away. Fans also know when a guy gives it all for the team that they love.

That is Charles Boozer for you Fanatics. He’s never the most talented guy on the floor. His body isn’t great for a Big 12 basketball player. But fans love him for one reason. They love him because unlike a lot of division one college basketball players out there, Boozer plays for the name on the front of his jersey.

Iowa State was the only BCS conference school to offer him a scholarship and he’s never forgotten that.

In case you didn’t read yesterday’s report, Boozer’s recovery from a torn ACL is ahead of schedule and he’ll be up to full speed in June. Regardless of how successful his teams were at Iowa State, Boozer is one hoopster that Cyclone fans will never forget.

I’ve heard a lot of talk this week that this year’s Final Four is “boring.”

The more I have studied it, the more interesting this weekend has become for me. Here’s how I’m approaching Saturday’s games.

If you’re one of those people out there who continues to refer to Butler as Cinderella, please knock it off. This team has won 117 games over the past four seasons. A team coached by a guy who looks like a law student (Brad Stevens) is a favorite over a guy who has been in the Final Four in six of the last 12 years (Tom Izzo).

So please, spare me with your Cinderella references. With Butler’s postseason run, they’ve clearly surpassed Gonzaga as the nation’s top mid-major program. When I think of elite mid-majors, I think of Butler, Gonzaga and Xavier. The Bulldogs are now the only school of those three to make a Final Four.

Having said that, Butler still doesn’t interest me. Sure, they represent everything that is good about college basketball. They play in the freaking gym that Hoosiers was filmed in! We all should love them.

But I am not intrigued. I think and hope that Michigan State wins this game. I want to see Izzo vs. Coach K in the finals.

Here’s what you have with this matchup. You have two teams and coaches that not many people like.

You have Coach K, who many people view as an elitist and Bob Huggins, who is about as unlikable of a human being as there is in the entire world of sports.

West Virginia is tough and athletic. Duke is consistent and smart.

My pick? Are you kidding me? Even if I thought West Virginia was going to win this thing, I’d go with Duke. I just can’t seem to find it in me to pick Huggins.

– With all this talk of expanding the NCAA Tournament to 96 teams, it is natural to think about how such a move would impact Greg McDermott and Iowa State. I think that this would be a terrible thing for McDermott. Unfortunately, even if the tournament had been at 96 teams during Mac’s tenure, it is hard to imagine any Iowa State over the last four years making the Dance. Thinking that this is going to happen next year is a bit of a stretch. Of course, anything is possible. The problem is, while it is going to be easier to make the tournament, there is going to be that much more pressure on coaches to qualify, specifically guys on the hot seat like McDermott. In my opinion, Iowa State will be anywhere from 10-12 during the Big 12’s preseason rankings next season. That number would not put them in the NCAA Tournament once again. It is going to be an uphill climb but again, anything is possible right?

– This one might stir a few people up. But I think that ESPN’s Doug Gottlieb is a phenomenal analyst. I’m hooked on listening to the guy. His takes are fresh. His delivery is solid. After this week, I’m sold as a big fan.

– “Let’s Be Mad?” That’s the word out of Iowa City these days. “Let’s Be Mad” say the Hawks. I’m mad…Mad that it took me five minutes to navigate through that website to figure out what in the world “being mad” actually meant. Fran McCaffrey seems like a nice enough guy. He’s proven over the years that he can coach and rebuild basketball programs. He’s got to recruit though. If you watched Iowa at all last year, you know that the players on that roster aren’t your up-tempo, run-and-gun type of guys.

– If I was inside of Iowa’s marketing department, I would have waited to release this website until this summer. Right now, everybody is already drinking the Kool-Aid and living it up. Why not wait until the dog days of summer to pop that bad boy out to give people something to be excited about? Questionable timing in my opinion.