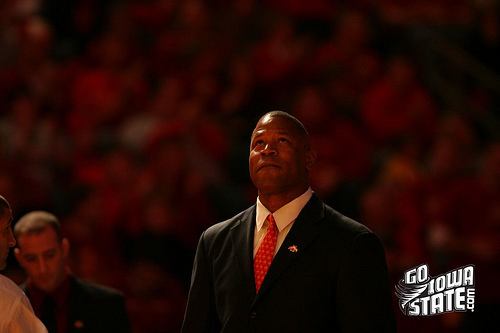 Courtesy of Iowa State Athletic Communications OMAHA, Neb. – The Iowa State wrestling team started the 2010 NCAA Championships with five winners in first round action at the Qwest Center. ISU picked up bonus points in the initial session from seniors Mitch Mueller (149) and Jake Varner (197). Three Iowa State losses in the first round, including fourth-seeded Jon Reader’s match at 165 pounds, were decided by one point. The Cyclones are in seventh place with 13 points after the first session. Iowa (21.5) and Oklahoma State (16) hold the top two team spots. Second session competition begins at 6:30 this evening.

“We need to go back to the hotel and regroup,” Iowa State head coach Kevin Jackson said. “There is still a lot of wrestling left. We’ll need to come back and compete hard in the wrestlebacks. We got good wrestling out of Jake and Dave. We had a couple matches where we led with less than 30 seconds left and lost by a point.”

ISU’s top-seeded Varner started his quest for a fourth NCAA finals appearance and a second 197-pound crown with a 17-2 (7:00) technical fall of Boise State’s Matt Casperson. Varner was looking for offense throughout the match while compiling 4:22 in riding time. The Iowa Stater (27-0) will face Cal State-Bakersfield’s Riley Orozco in the second round.

No. 1-seeded David Zabriskie scored Cyclone points at heavyweight with an initial victory over Wisconsin’s Eric Bugenhagen by decision, 6-2. ISU’s two-time All-America honoree moves forward to face Eric Nye of Arizona State in second round action. Zabriskie turned away Nye by a score of 3-1 earlier this season.

ISU’s Andrew Long (125) picked up his 24th win of his freshman campaign and his first career victory at the NCAA Championships with an 8-2 decision of Stanford’s Ryan Mango. Long controlled Mango with 2:35 of riding time, and notched a two-point nearfall in the second period. Long will face Utah Valley’s 12th-seeded Ben Kjar in the second round of 125-pound action.

Veteran Cyclone Nick Fanthorpe got right to work to start his fourth trip to the NCAA Championships. The ISU All-American 133-pounder racked up a dominating 4:50 in riding time in a 14-3 major decision victory over Brown’s Cortlandt Choate. Tenth-seeded Fanthorpe advances to face No. 7 Mike Grey of Cornell. Fanthorpe decisioned Grey in Ithaca, N.Y., 6-3.

At 149 pounds, No. 7 Mitch Mueller began his tournament with bonus points for ISU. Mueller scored a major decision over Liberty’s Frank Gayeski, 11-2. The Cyclone advances to matchup with Michigan State’s Anthony D’Alie.

Cyclone sophomore 141-pounder Dalton Jensen fell in first round action to Ohio State’s Reece Humphrey, 11-3. Jensen drops to the consolation bracket to face Nebraska’s Mike Koehnline. Jensen holds an edge against the Husker in matches this season, 2-1. The Iowa Stater prevailed by major decision in their last meeting at the Big 12 Championship, 11-2.

ISU 157-pounder Andrew Sorenson led late in the third period against Michigan State’s Anthony Jones, but a final flurry from the Spartan resulted in a loss for Sorenson, 8-4. The Cyclone falls to the consolation bracket to take on Joseph Booth of Drexel.

Reader fell to upset-minded Chris Brown of Old Dominion at 165 pounds, 5-4. Reader, a two-time All-American, will battle in the consolation rounds and start with Navy’s Robby Neill.

Iowa State’s Duke Burk scored the takedown he needed to tie his match at 3-3 at 174 pounds with No. 10 Jordan Blanton of Illinois, but a riding time advantage of 1:07 gave the win to the Fighting Illini wrestler. Burk will wrestle back in the consolation bracket with Lehigh’s Robert Hamlin.

Cyclone 184-pounder Jerome Ward gave a spirited effort to upset top-seeded Kirk Smith of Boise State but fell just short, 4-3. Ward struck first with a takedown in the first period but was unable to hold off the Bronco grappler. Ward faces Binghamton’s Nathan Schiedel in the second 184-pound consolation round.

Session I Results Championship Round of 32

Cyclones in third after day one 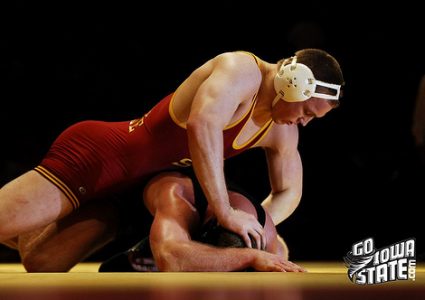