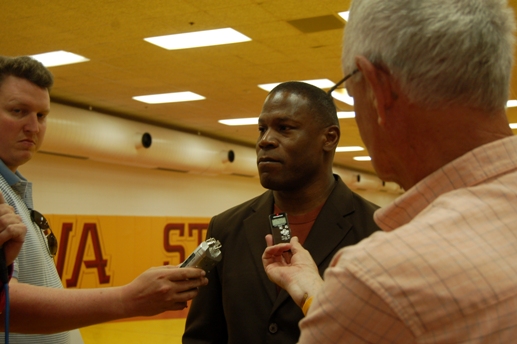 The second-ranked Iowa State wrestling team will begin their 2009-2010 season this evening when South Dakota State invades Hilton Coliseum. The match will also mark the beginning of the Kevin Jackson era in Ames.

Jackson met with reporters on Monday morning. Here’s the Q&A.

KJ: We are excited about our first match with South Dakota State. We do feel like we are the stronger team going into this dual meet. We should wrestle at a very high level. Obviously, when you wrestle a team that you feel you are better than, there is a chance for a mental letdown or not wrestling accordingly. We’re definitely looking for our guys to set the tone for the whole year, looking to score points, looking to really dominate each and every match. We’re looking forward to it. We have a couple of starters who will be out for the dual meet. Andrew Long at 125 is not going to be competing due to some disciplinary actions for him. Nick Fanthorpe is another wrestler who had a hamstring injury. He had surgery in August. He is just now recovering from that injury. I think that he is ready to wrestle right now but I don’t think he is at 100 percent. We aren’t going to throw Nick out there until we feel he can go out there and compete the way we want to see him compete. We definitely need him healthy when Iowa rolls into town. That’s when we plan on having him at 100 percent. So Nick won’t be wrestling. We have two freshmen that we might have to throw out there. Dallas Collier from Hawaii, a freshman, who is on the verge of maybe being ready but I don’t know if he is big enough or strong enough to really compete the way we like to see our wrestlers compete at this time. I’m not sure if he’ll wrestle or not. We have Ben Cash, from Des Moines, who can compete for us at 133 pounds. We had planned on red-shirting him but with the injury to Nick, we’re probably going to have to wrestle him.

How excited are you to finally get things going?

KJ: Well I am really excited. I am happy that we have a chance to compete. We’ve been training for a long time and when you’re training, everybody looks good in practice. When you throw them out there in competition, you really find out what you have. I understand that we are in the heat of football season but wrestling is just a little bit different than football. In football, there is so much pressure on every game. For wrestling, it’s the same thing. You want to win every match but it is a process when you throw them out there to see how they compete. Then, you go back in the room and get better. After that, it’s the Big 12 and national tournaments along with a couple of big duals that we’re really putting emphasis on. It’s a little different philosophy but I know that my guys are tired of working out. They’re ready to compete.

How healthy is Dave Zabriskie?

KJ: He’s healthy. He bruised his knee in practice a week ago. He hit knee on knee with Kyle or Jake. They were wrestling and hit knee to knee. David got the worst of it. He’s been getting healthier every day. It’s just a deep bone bruise. There is very little blood flow around that area so it takes a little longer to heal. My trainer told me that is how it works. He’s getting healthier and we’re looking forward to him wrestling and scoring a lot of points for us.

What are you saying to your seniors before the season beings?