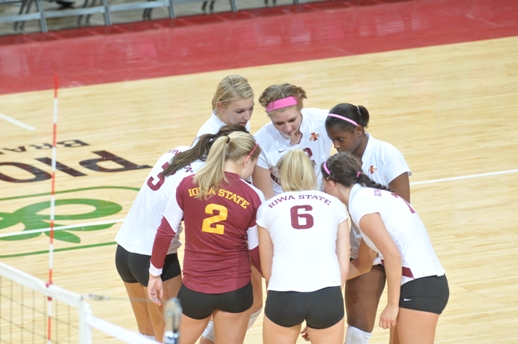 With all of the positives currently surrounding the Iowa State athletic department, it’s possible that none top what the volleyball team has done this fall. The Cyclones are currently 20-4 overall with a 12-3 Big 12 mark. Tonight, the ladies head to Texas A&M while a road trip to Manhattan looms on Saturday.

On Monday afternoon, I had the opportunity to sit down and talk with head coach Christy Johnson-Lynch. Here’s what went down in our conversation.

How did the girls respond to the Nebraska loss?

CJL: I think that they will be fine. I think the most important thing is that we put it in perspective. Yes, it was really disappointing and I thought that we could have played better but we’ve had so many big matches over the past couple of weeks that in the scheme of things, although it was a tough loss, we have to remember that we’ve done so many great things. Beating Nebraska in Nebraska, the big comeback against Baylor in the fifth, then Texas, it’s kind of been one after another. Although we faltered a little bit on Saturday, I would hope that it doesn’t affect us much. Nebraska is a great team. They’re a top 10 team. It’s hard to keep outdoing. We’ve raised the bar so high. Sometimes it is hard to keep raising it. I think we’ll be fine.

Have you been at least a little surprised as to how much volleyball has caught on in Ames this year?

CJL: I have a little bit. Yes. I kind of felt that there was the potential here. Sometimes it feels like you kind of get the momentum going and then all of the sudden it’s like a snowball and everybody is going nuts all of the sudden. That’s what it feels like right now. That’s what I hoped and dreamed for. I think that we are getting to that point. We’re really excited about where our program is and where we’re headed. The fans really enjoy coming to watch the games. I dreamed that it would get to this point. I just didn’t know if it would happen or how soon it would happen.

That crowd was pretty incredible on Saturday night wasn’t it?

CJL: I said this to several people last week. It was a neat moment for me to just kind of sit back and look at the crowd and just remember back to when we would average 650 fans a night during my first year. They were a pretty quiet group. Just reflecting on that last week was pretty cool. Just to think about how far we have come. And again, it’s disappointing that we lost on Saturday, but when you reflect onto how far we have come, you really can’t help but be excited about the team and program.

I know that a lot of times, goals change throughout a season. At this point, what are you guys shooting for?

CJL: We really don’t do a lot of goal setting with our team. We do as individuals, with stats and individual goals but we don’t do a lot of team goals. My feeling is that it just seems to put too much pressure on teams. Once you don’t reach the goal, or sometimes you realize that you won’t reach the goal, then what are you left with? Right now, we are in position to take second place in the Big 12. That is a great goal for the remainder of the season. That’s going to be difficult because we have a lot of big matches left. We have a tough one with A&M, Missouri, Oklahoma is playing great right now. It’s going to take some more great performances to keep second place. We want to make a great run in the tournament.

It’s nice to have some seniors isn’t it?

CJL: Oh yeah. For sure. Kaylee (Manns) has been a four-year starter. She is as experienced as anybody in the country. She is incredibly competitive. I love going into matches with her. She’ll do everything she can to help us win. The bigger the match, the better she plays.