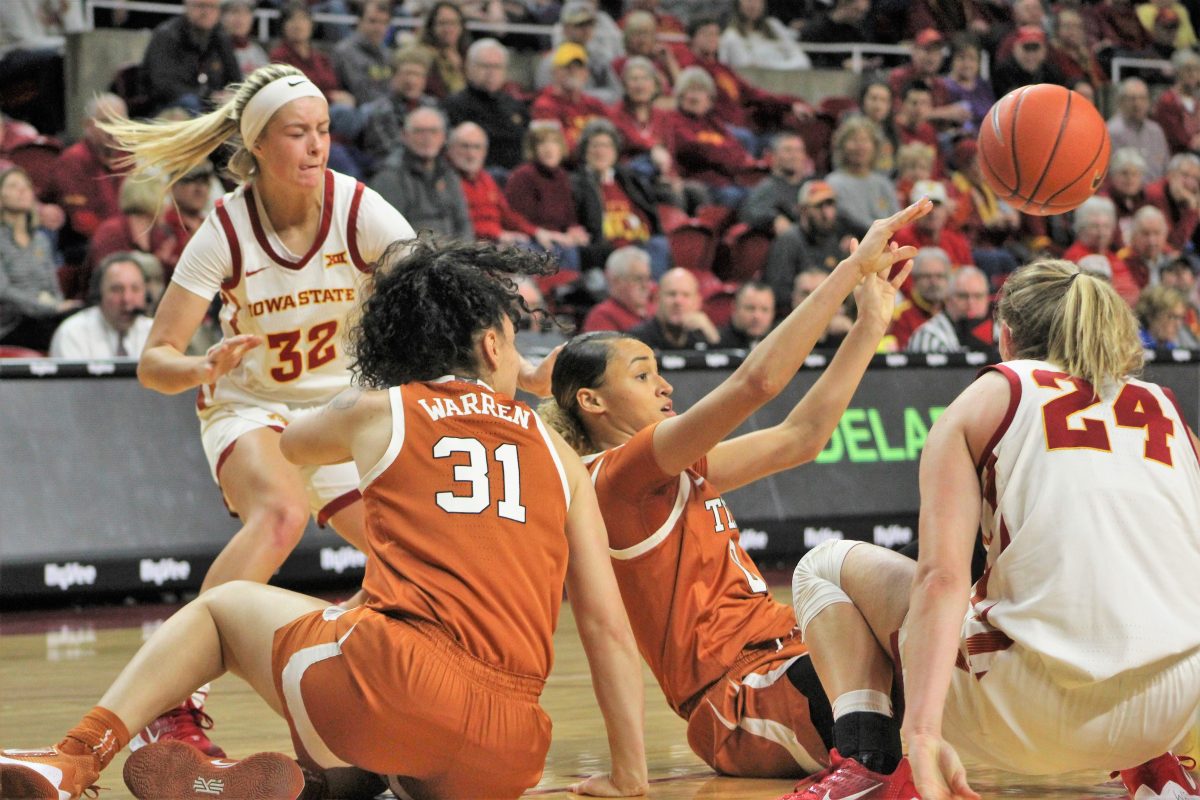 Iowa State’s Maggie Espenmiller-McGraw (32) and Ashley Joens (24) fight for a loose ball on the ground in their loss to the Texas Longhorns on Monday. Photo by Connor Ferguson

AMES — It didn’t take long for the seven-player rotation that Iowa State rolled out in its 30-point win over Texas Tech on Friday to catch up to the Cyclones.

Iowa State got out-bodied and out-run by Texas on Monday night at Hilton Coliseum, losing 81-75 in a game that was more lopsided than the final score indicated.

“After [we got] off to a good start, they punched us in the mouth and made the game a street fight,” Iowa State coach Bill Fennelly said.

The Cyclones opened the game with an 11-0 run before Texas could get onto the scoreboard, but something changed shortly afterwards. The Longhorns took to the attack and went straight after the Big 12’s leading scorer in Ashley Joens.

“It was a huge gamble,” Texas coach Karen Aston said. “She has been on a roll and is one of the best players in the country, statistically.”

Texas’ defenders prevented her from finding an open shot and even getting the ball inside of the paint, limiting Joens to just four points in the first half. They did it by using the body.

“We just have to understand that the way to play us is just to maul us and beat Ashley Joens up,” Fennelly said. That’s how everybody has done it so far and that’s going to continue. It’s not going to change.”

The Iowa State coach in his 25th season compared the physicality brought by Texas to that of Longhorns’ football team after the game.

Even though Joens found a way to net 18 points by the end of the night, it wasn’t enough to have the impact need for the Cyclones to win.

“It was really physical,” Joens said. “You just have to stay strong, pass it, and get everyone open shots so they have to come after other people as well.”

Iowa State entered halftime trailing by six points and the Longhorns went on to take advantage.

Beaten and battered by the first half of play, Texas continued to flex its muscles on the defensive side of the ball and started hitting shots on offense.

At one point in the third quarter, the Longhorns utilized a 12-0 run that distanced the game from the Cyclones, and force Iowa State into trying to claw its way back.

“We knew that was going to come,” sophomore Kristin Scott said. “We have to find a way to make all four quarters [start with] the way we came out in the first quarter.”

That’s something that Iowa State is going to have to do a lot of in their remaining 16 conference games this season: Find a way.

Fennelly and his staff know how other teams will attack and as he said – it won’t change any time soon.

“We have to learn from it,” Fennelly said. “We have to be smarter. We have to put our kids in better position and change our offense maybe just a little bit. There’s no trade deadline in women’s basketball. There’s no waiver wire. This is the team we have.”

It will be up to Fennelly and his players to figure out if there will be any drastic adjustments ahead of the matchup with the Sooners, or how they’ll be implemented.

Until then, the next person knows as good as anyone else on how to avoid physical teams from taking advantage like the Longhorns did so well on Monday.