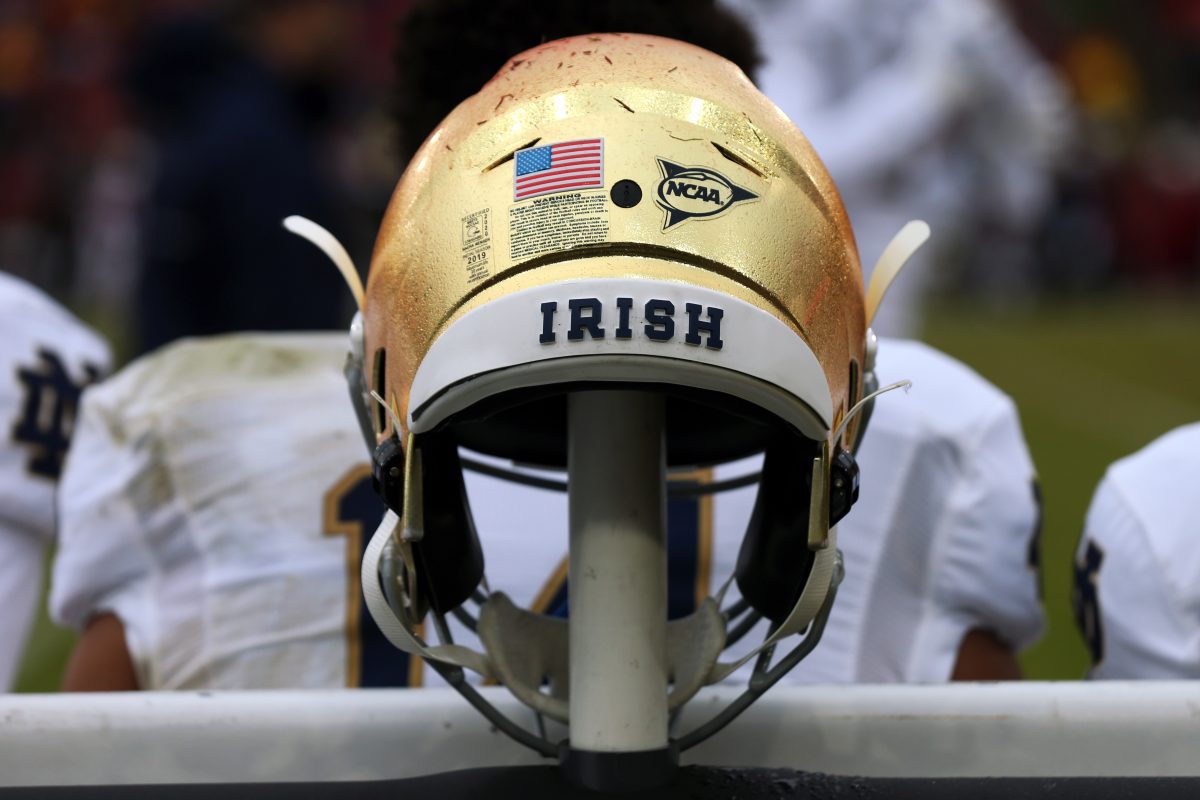 In 150 years of college football, Iowa State and Notre Dame have never faced one another. That is all going to change in less than a week in the Camping World Bowl, when the Cyclones get their first-ever chance to take on the Fighting Irish.

It will, no doubt, be a difficult task. The No. 15 Irish finished their 10-2 regular season with a scoring offense and scoring defense that are both ranked in the top 15 nationally. But the challenge for Iowa State on December 28 will be bigger than the Notre Dame players and coaches on the field that day—because with Notre Dame comes a legendary history that dates back to the turn of the 20th century.

That’s what we are focusing on here today as Cyclone Fanatic continues to prepare for the postseason.

It begins with an all-time great coach Knute Rockne, who led the Irish to the first of the school’s claimed 11 national championships (the NCAA recognizes 13). According to the school, its first national title came in 1924 after a 10-0 season capped with a victory against Stanford in the Rose Bowl.

But the 1924 season was about more than its flawless record and national title. As noted by ESPN in its recent list of the 150 greatest coaches in the history of college football, Rockne “created modern coaching” in part through his ability to market and publicize his small, Catholic, midwestern team. And Rockne’s promotion before the 1924 season began set in motion several events that projected the Irish into the national spotlight and college football lore.

First, Rockne convinced Army to face the Irish at the Polo Grounds in New York City. According to author Jim Lefebvre, Rockne then sent his publicist to the press box to monitor the “big city” newspaper writers. During a discussion among the newspaper reporters about the Notre Dame backfield led by Harry Stuhldreher, Don Miller, Jim Crowley, and Elmer Layden, Rockne’s publicist referred to the players as the “Four Horsemen.” Later that evening, after the Irish defeated Army 13 to 7, the following appeared in the heralded New York Herald Tribune:

Outlined against a blue-gray October sky, the Four Horsemen rode again. In dramatic lore they are known as Famine, Pestilence, Destruction and Death. These are only aliases. Their real names are Stuhldreher, Miller, Crowley and Layden. They formed the crest of the South Bend cyclone before which another fighting Army football team was swept over the precipice at the Polo Grounds yesterday afternoon as 55,000 spectators peered down on the bewildering panorama spread on the green plain below.

Notre Dame won its ninth game in 12 Army starts through the driving power of one of the greatest backfields that ever churned up the turf of any gridiron in any football age. Brilliant backfields may come and go, but in Stuhldreher, Miller, Crowley and Layden, covered by a fast and charging line, Notre Dame can take its place in front of the field. Coach McEwan sent one of his finest teams into action, an aggressive organization that fought to the last play around the first rim of darkness, but when Rockne rushed his Four Horsemen to the track they rode down everything in sight.

The legend of Notre Dame’s Four Horsemen was born.

But Rockne, who was identified by ESPN as the third greatest college football coach of all-time, wasn’t done cementing his place in college football history. In 1928, Rockne delivered the famous “Win one for the Gipper” speech to rally his players at halftime.

“The Gipper” was former star George Gipp, who died of a streptococcus infection in 1920 just after the Irish completed another perfect season.  Rockne told his players that Gipp, while on his hospital bed, asked Rockne to have the team “win just one for the Gipper.” Regardless of whether Rockne’s account of Gipp’s request was true, it worked; the Irish beat Army 12 to 6, and another legend was born.

Then, after a disappointing 5-4 finish to the 1928 season, Rockne did in 1929 what no coach has ever done before: He led his team to a perfect 9-0 record and the school’s second national title without ever playing a game at home.  Notre Dame Stadium was under construction that year, so all of the Irish’s games were played away from South Bend.

Notre Dame Stadium was completed in time for the 1930 season, which culminated in another undefeated 10-0 season and another national championship. The House that Rockne Built remains one of the most iconic stadiums in sports.

Tragically, after leading the Irish to back-to-back national championships, Rockne was killed in a plane crash in March of 1931.

After a national championship drought in the 1930s, the 1940s were kind to the Irish. Notre Dame hired Frank Leahy, who led the Irish to four national titles in seven years (1943, 1946, 1947, 1949).  From the 1946 season through the 1949 season, the Irish did not lose a single game. Leahy’s success at Notre Dame was enough for ESPN to recognize him as the 10th greatest college football coach of all time.

The Irish then went without another national title until the 1960s, when Notre Dame hired yet another legendary coach, Ara Parseghian. According to the NCAA, the Irish were national champions in Parseghian’s first season in 1964, though the school only claims 1966 and 1973 as Parseghian’s titles.

Parseghian retired following the 1974 season after the Irish upset top-ranked Alabama in the Orange Bowl and ruined Bryant’s national title hopes for a second straight season. Parseghian is 15th on ESPN’s list of the greatest coaches in college football

Parseghian was famously depicted in the 1993 film Rudy as the coach who gave Daniel “Rudy” Ruettiger, the bumbling football wannabe, a chance.  Parseghian let Ruettiger play on the scout team, thereby solidifying his place as one of the “good guys” in sports movie lore. Parseghian’s replacement, Dan Devine, was not depicted as kindly.

If you believe the movie, Devine only allowed Ruettiger to suit up after other players threatened not to play without him. Rudy’s directors have admitted that the reality of the “jersey scene” was . . . less dramatic, but nonetheless, Ruettiger played, recorded a sack, and was carried off the field, and yet another Notre Dame legend was born.

Devine, who is 88th on ESPN’s list of college football’s best coaches, went on to lead the Irish to its second national title in five seasons in 1977.

The Irish then went without another national championship until 1988.  Though the Irish ended the 1988 season with a victory against West Virginia in the Fiesta Bowl, the 1988 season is better recognized by its regular season win over top-ranked Miami. The game, known as the Catholics vs. Convicts matchup, became an immediate classic. It has since become the subject of one of ESPN’s proclaimed 30 for 30 documentaries.

By 1988, the legendary Lou Holtz was at the helm. Holtz, who is 24th on ESPN’s all-time coaches list, is responsible for the “Play Like a Champion Today” sign. According to the school, Holtz was flipping through an old football picture book when he saw a similar sign and commissioned one for the team. Holtz placed the sign in the staircase leading to the field where it has remained since. Players began touching the sign on the way out to the field, and another Notre Dame legend was born.

The Irish have not won another national title since 1988, though they have been close. Under Notre Dame’s current head coach Brian Kelly, the Irish lost the BCS National Championship game in 2012 and a College Football Playoff game in 2018.

In all, Notre Dame’s 11 (or 13) national titles are second only to Alabama during the modern “poll era.” Given its success, it is no surprise that the program in the top 10 for all-time wins. Notre Dame also has seven Heisman Trophy winners, which is tied for the most of any school. Simply put, Notre Dame’s football program is legendary.

Iowa State’s football program, on the other hand, has a much less storied—if not tortured—past. It goes without saying that the Cyclones will be outmatched on December 28 in terms of history, lore, and celebrity.

But over the last few seasons, the ship, captained by Matt Campbell, has started to right its course in Ames.

Iowa State has a chance to reach the eight-win mark for the third-straight season, which has only occurred one other time in program history. Coach Campbell is likewise only the second coach in program history to lead the Cyclones to three straight bowl games.

Maybe Campbell is Iowa State’s Rockne (or Leahy or Parseghian or Devine or Holtz). Perhaps this will be the year that Iowa State takes down a college football giant and sets the foundation for a legendary run of its own.

As Iowa State fans have grown fond of saying, a storm is brewing in Ames, Iowa—a cyclone, if you will. And when Grantland Rice wrote his historic lede in the New York Herlard Tribune on October 18, 1924 after the Irish beat Army, he had something to say about cyclones:

A cyclone can’t be snared. It may be surrounded, but somewhere it breaks through to keep on going. When the cyclone starts from South Bend, where the candle lights still gleam through the Indiana sycamores, those in the way must take to storm cellars at top speed. Yesterday the cyclone struck again as Notre Dame beat the Army, 13 to 7, with a set of backfield stars that ripped and crashed through a strong Army defense with more speed and power than the warring cadets could meet.

Now, 95 years later, the Cyclone starts from Ames, where Iowa Nice still gleams through the winding streets around Jack Trice Stadium. This time, the Irish are in the way, and–as the Cyclone Weather Alert goes–its fans are warned to seek immediate cover. Let’s hope Iowa State will be able to strike with more speed and Cyclone Power than the Irish can handle. 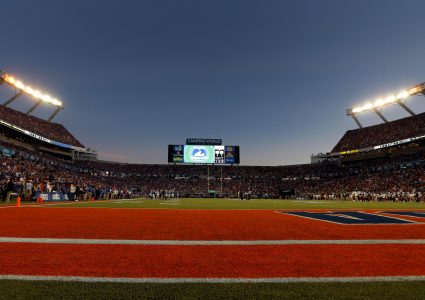