I’m not sure anyone really knew what to expect from the former Nebraska transfer during his first year on the floor for the Cyclones.

Once Jacobson first committed to Iowa State nearly two years ago, it seemed likely he would slide in as a rotational role player of the bench, but there were rumblings almost immediately upon his arrival on campus that he was immensely more talented than even people within the program realized.

Even then, entering the preseason, it seemed likely Jacobson would be on the outside looking in for a starting spot assuming Cameron Lard continued to progress. That all changed once Lard was suspended for the start of the season, sliding Jacobson immediately into the starting five and the Waukee native took advantage of his opportunity.

Jacobson scored in double-figures in each of the Cyclones’ first 10 games, including a career-high 22 point breakout performance against Illinois in Maui. He brought an edge in the paint that nobody else on Iowa State’s roster was capable of, especially as Lard worked his way back from his suspension and into the rotation.

While the 6-foot-9 forward hit a lull near the middle of the season, he recovered to play some of his best basketball of the season when it mattered most.

No game on Iowa State’s schedule better exemplifies what Jacobson brought to the table than the Big 12 semifinal win over Kansas State. His impact was not heavily felt in the scoring column as he produced just eight points, but there is no questioning his 16 rebound effort against the Wildcats was one of the most impressive individual performances put together by an Iowa State player in 2018-19.

He followed that up by dropping 14 points, including two key 3-pointers, in the title game against Kansas. Jacobson’s efforts in Kansas City earned him a spot on the All-Tournament team — and my vote as the bracket’s Most Outstanding Player.

Iowa State does not add a fourth Big 12 Tournament title trophy in the last six years without Jacobson.

What his role likely will be…

Jacobson took over as one of the team’s most vocal leaders during its end of the regular season downturn. Many of the team’s issues came incredibly clear following the on-court blow-up between him and Talen Horton-Tucker, prompting Jacobson to publicly call on more of his teammates to “give a crap” several days later.

This mentality will be expected to carry over into his senior season as he’s suddenly the program’s elder statesman. Nobody on Iowa State’s roster has played more college basketball than Michael Jacobson, who will play his 100th collegiate game in the team’s 2019-20 season-opener.

This is Jacobson and Tyrese Haliburton‘s team to lead now.

This piece of the equation is really interesting to me if Iowa State is going to play more with two bigs in 2019-20 like Steve Prohm said in his Off the Record podcast conversation with Chris Williams. I think it creates the possibility for a really interesting dynamic with Jacobson as the muscle inside and George Conditt as the team’s primary rim protector.

Playing this way will most likely force Jacobson into spending more time around the perimeter in a stretch-four type role while Conditt works closer to the block. That will require improvement in Jacobson’s shooting stroke, an area he was vastly inconsistent in during 2018-19.

He knocked down 10-of-22 shots from deep during non-conference play then went 0-of-9 to start the Big 12 slate. He closed the season by going 6-of-16 from deep with two of those six coming in Kansas City.

Jacobson becoming more consistent from deep could be the biggest key to Iowa State being able to run two bigs together in 2019-20. As the roster currently stands, that’s a way the Cyclones will have to play to get their most talented players on the floor together. 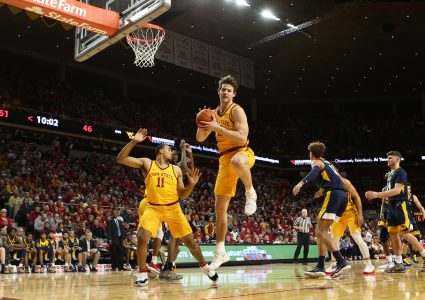