The last time these team met on Dec. 31, the Cyclones trailed by 11 at the beginning of the 4th quarter but rallied back behind the home crowd, narrowing the margin to three after a Madison Wise 3-pointer with 25 seconds remaining.

The ‘Clones didn’t prevail, but they head into tonight’s contest with a better grasp of their own identity at this point in the season.

Head coach Bill Fennelly mentioned how the rotation has started to fall into place, and part of that comes from the decision to establish Emily Durr as the team’s point guard earlier in the year.

Only scoring two points in her last time out versus Oklahoma, Durr has embraced her new role in her final season, scoring 15 or more in seven of the last eight games for ISU.

“Her best friend and roommate is Bridget, and I think she saw what Bridget was doing, [and] the help that Bridget needed,” said Fennelly. “The other night she called some plays that were great calls at the right time that got us baskets. She understands our system.”

Coming on both as a distributor and a scorer, it has been a joy to watch Durr excel in her final weeks as a Cyclone.

“My thing with seniors is to leave a piece of you behind,” said Fennelly. “What you leave behind needs to be something that the kids moving forward understand that’s what it means to wear an Iowa State uniform.”

Iowa State is currently allowing 67.3 points per game, which is 228th in the country. Even worse, they only force 14.35 turnovers a game, which ranks at 261st overall.

Being better defensively both in transition and on-ball were two areas Fennelly specifically wanted to improve at after watching previous film versus Oklahoma.

All five of the Sooners starters average over 12 points a game, which may present some issues for Iowa State on the defensive end.

Nonetheless, there has been something about this Cyclones team on the road that has given them a spark, winning four of their five conference games away from Hilton Coliseum. 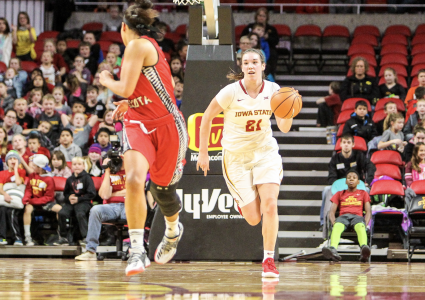