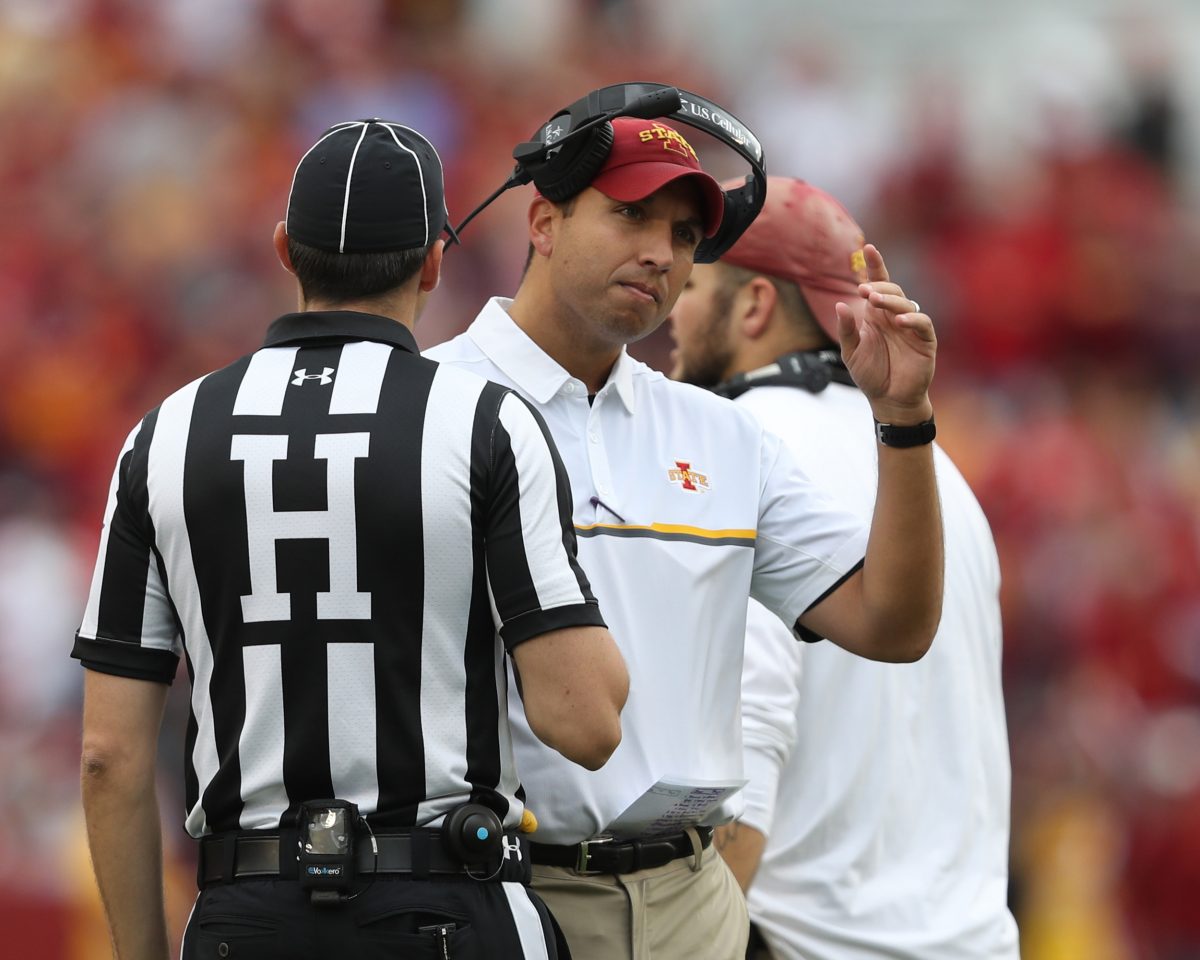 The Iowa State offensive line will, once again, enter next season with a number of question marks along their offensive line. Right now, redshirt freshman Julian Good-Jones is the only current starter returning on next year’s team, but that could change if the Cyclones get their way.

Iowa State head coach Matt Campbell brought up the possibility of senior offensive guard Patrick Scoggins landing a medial redshirt, and sixth year of eligibility, on this week’s Cyclone Call-In Show. On Wednesday, he added some clarification to those thoughts.

“I just think it would be big for him and it certainly would be a huge help for us,” Campbell said after practice on Wednesday. “Now, are we counting on it? No, but it is certain we can apply for it and just see what happens. I think there’s enough from both his redshirt year where he was injured and the other year where he did not play due to injury that will at least give us a fighting chance.”

Scoggins has started all five games for Iowa State this season while rotating between the two guard spots. He suffered a season-ending knee injury on the second day of practice in 2015 after arriving in Ames from junior college.

The 6-foot-1-inch, 293-pound, Inglewood, Calif., native started his college career at Sacramento State, where he redshirted during his freshman season in 2012. He suffered an injury during that year that kept him off the field and led to his transfer to Long Beach Community College.

“He’s the one that kind of brought it to our attention,” Campbell said. “Which was refreshing number one and number two I think we were like, ‘This was news to us and we’re kind of excited about it.’ Again, we’ll help him anyway we can to see if that is real and sticks, but something that he certainly brought to us and would love to have him around for another year.”

*** The NCAA Division 1 Council proposed several rule changes on Wednesday. The biggest proposed change comes in the form of an early signing period in the months of June and mid-December.

The ramifications of an early signing period are, obviously, unknown at this point, but Campbell thinks it is something that requires more discussion.

“You talk early signing period but then what happens with the recruiting calendar and how does that effect things,” Campbell said. “What do you do with official visits early? I think there’s a lot to it that everybody thinks is a good idea when it’s put out there, but then you say, ‘Well, here’s what could happen. Here’s the ramifications if you go to this model.’ I think there’s a lot out there. I look forward to looking at the literature and see what they put out, so I don’t know enough about it, but I look forward to reading about it and seeing if that’s something that would be beneficial to all.”

The other big change would be the addition of a 10th full-time assistant coach. Campbell had some interesting thoughts on that one, as well.

“More people helping, sure, that’s great,” Campbell said. “Again, when do we get to the point where enough’s enough? I guess, I’m the Division 3 guy where there were four of us coaching 300 guys, so all that stuff’s good. Is it good for our profession? Absolutely, to have another full-time coach at the Division 1 level. Jeez, there’s a lot of coaches all over the place. Sometimes I don’t even know what they do. I think, maybe, that’s why our staff’s so small.”

*** Campbell said this week was the first time in quite awhile that Allen Lazard had practiced on both Tuesday and Wednesday. He said it had been, “about four weeks,” since Lazard practiced fully.

*** Campbell said defensive end J.D. Waggoner and linebacker Bobby McMillen are both doubtful for Saturday’s game in Stillwater. He’d said at his press conference on Monday that both players were questionable heading into the week.

Scoggins out for the year with knee injury

Waggoner and McMillen questionable; Scoggins good-to-go for Saturday in Stillwater