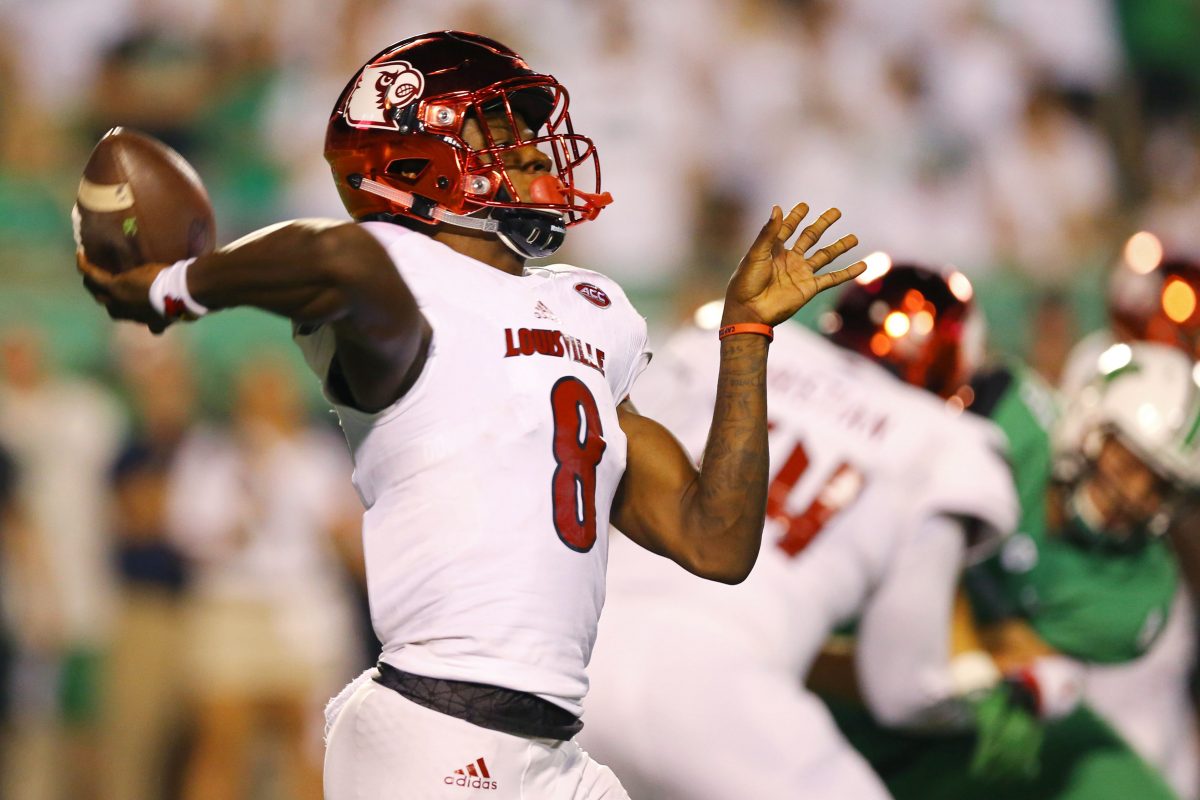 WEEK 5 PICKS ARE IN!

Stanford @ Washington (-3) – Still need to see more from Washington before I will buy the hype. Tonight is a great opportunity. I’ll take Stanford though because they are proven and have played much better competition.

Kansas State @ West Virginia (-3.5) – I actually really like West Virginia here. I’m still not sold that Kansas State is legit and am starting to believe that the Mountaineers could be a sleeper in the Big 12.

Louisville (-1) @ Clemson – Clemson, only because they are at home. Neutral field or on the road, I’d take Louisville.

Oregon (-1) @ Washington State – Wrong team is favored. Give me the Fighting Leaches.

Stanford @ Washington (-3)- The Cardinal piled on late to derail my upset special pick of UCLA last week and that made me angry. So I’ll reward Christian McCaffrey and Co. by picking a solid win and cover this week. If you can’t beat ‘em, join ‘em, right?

Texas @ Oklahoma State (-2.5)- How naive I was a couple weeks ago to proclaim that the Horns are back. They’re not. They’re also not good enough to pull the upset on a solid Cowboys squad that’s yet to see the best from Mason Rudolph. Pokes.

Kansas State @ West Virginia (-3.5)- The Mountaineers have been impressive with their undefeated start to the season, but (insert vampire joke here). The Wildcats are doing little things (like plus-4 in turnover margin) right and hang tight in Morgantown. Might not win, will cover.

Wisconsin @ Michigan (-10.5)- My, oh my, BadgerBall crushed me last week. I said I wasn’t a believer. I am now. As good as the Wolverines are, I like Wisconsin to make this a game. Maybe the Badgers even pull off another unexpected ‘W,’ but either way I’m confident they won’t lose by more than 10.

Oklahoma @ TCU (+3.5)- It’s hard to see the Sooners disfavored here, but it makes perfect sense. Also shows that the Big 12 will be a free-for-all until the end. I’ll (gulp) take the Horned Frogs to cover and send OU to its third loss.

Louisville (-1) @ Clemson- Is Louisville really a top-five team? We’ll find out against another top-five team on the road. I love Lamar Jackson, but will play it safe by picking the home team. Tigers score the mild upset in Death Valley.

Oregon (-1) @ Washington State- Who cares? But Mike Leach — gotta love Mike Leach. Still, the Cougs (shockingly) won this game last season in Eugene. There’s bad blood in this one for the Ducks, who correct course and move to 3-2 with a convincing win.

Baylor (-16.5) @ Iowa State- I’m back on the picking-the-Cyclones-to-cover bandwagon, Sure, beating a middling team such as San Jose State like a drum last week may be a blip on the rebuilding radar, but I think ISU will put up some points in this one. Bears almost certainly win, but don’t cover.

Stanford @ Washington (-3) – I’ll buy into Washington in two years. Give me Stanford on the road.

Wisconsin @ Michigan (-10.5) – This line makes no sense to me. Michigan wins at home, but only by a touchdown.

Oklahoma (-3.5) @ TCU – I haven’t been impressed by Oklahoma’s defense, so I wouldn’t be surprised to see Kenny Hill have a big day. Regardless, Sooners win by a field goal.

Louisville (-1) @ Clemson – Lamar Jackson scores a go-ahead touchdown in the final minute to seal a Cardinals win in a classic in Death Valley.

Baylor (-16.5) @ Iowa State – I think Iowa State will move the ball a little bit on the Bears and I wouldn’t be surprised to see this game close into the third quarter. That said, I think the Bears have too much in the end. 45-24 Baylor.

Stanford @ Washington (-3) – Washington may be the most unknown top ten team in the last decade. Yes, Washington is in the top ten, fooled me as well. Washington 27 Stanford 21.

Stanford @ Washington (-3) – Huskies. I think there is a great team with a big deficiency. Stanford, the Fighting Christian McCaffrey’s, doesn’t have much of an offense outside of #5 making big plays. That’s hard to make work against the top-level teams.

Texas @ Oklahoma State (-2.5)  – Cowboys. Texas looked to be back early against Notre Dame. Well, turns out, neither one is what we thought.

Oklahoma (-3.5) @ TCU – OU by a lot. Kenny Hill can turn the ball over a LOT when he gets pressure, and as shaky as OU has been, they can get pressure.

Louisville (-1) @ Clemson – Clemson. Best game of the year. Lamar Jackson hasn’t had to play on the road in a really tough road environment, and Clemson is on one of the toughest. I’m so excited to watch this, since my picks are so bad I can just watch for fun.

Baylor (-16.5) @ Iowa State – ISU. 16.5 is a big line on the road. This Baylor team is not near as god on the road as they are in Waco. This game comes down to turnovers and execution. If ISU doesn’t turn the ball over, they definitely keep this close, and wouldn’t be surprised with a win.However, If they turn it over, they gets run out of the stadium.

Stanford @ Washington (-3) – Washington takes down the Cardinal at home, covers the three points.

Texas @ Oklahoma State (-2.5) – The Cowboys don’t cover and don’t be shocked if Texas sneaks out the win.

Wisconsin @ Michigan (-10.5) – Michigan has likely been the most impressive team in the country so far this season, don’t expect that to change. Wolverines win big and cover.

Oklahoma @ TCU (+3.5) – Oklahoma gets back on track, but not easily…the Sooners win but can’t cover the small spread on the road.

Louisville (-1) @ Clemson – The team that may battle with Michigan as being one of the most impressive teams of the young season heads to Clemson with the country’s best offense as one point favorites. The Clemson defense is tough but the cfbanalytics.com prediction machine has Louisville winning comfortably.

Oregon (-1) @ Washington State – Oregon is down a bit from previous years, but one point isn’t enough as we have them strolling out of this one with a double digit victory.

Baylor (-16.5) @ Iowa State – Line is 16.5, our predictions have Baylor by 17. That makes it a close call but what it can’t factor specifically is the improvement we’ve seen from Iowa State in the last two weeks. I’d like to think that the Cyclones can keep this one inside of 17 but I’m sticking with my original method…plus, the Baylor run game will be a problem for the Cyclone defense that is still fighting issues with their run defense. Baylor covers.

Oklahoma (-2.5) @ TCU – The Horned Frogs haven’t impressed me at all this year. Give me the Sooners to win by a touchdown. 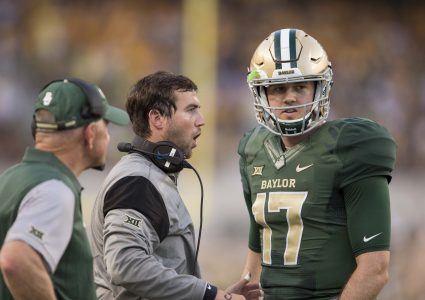