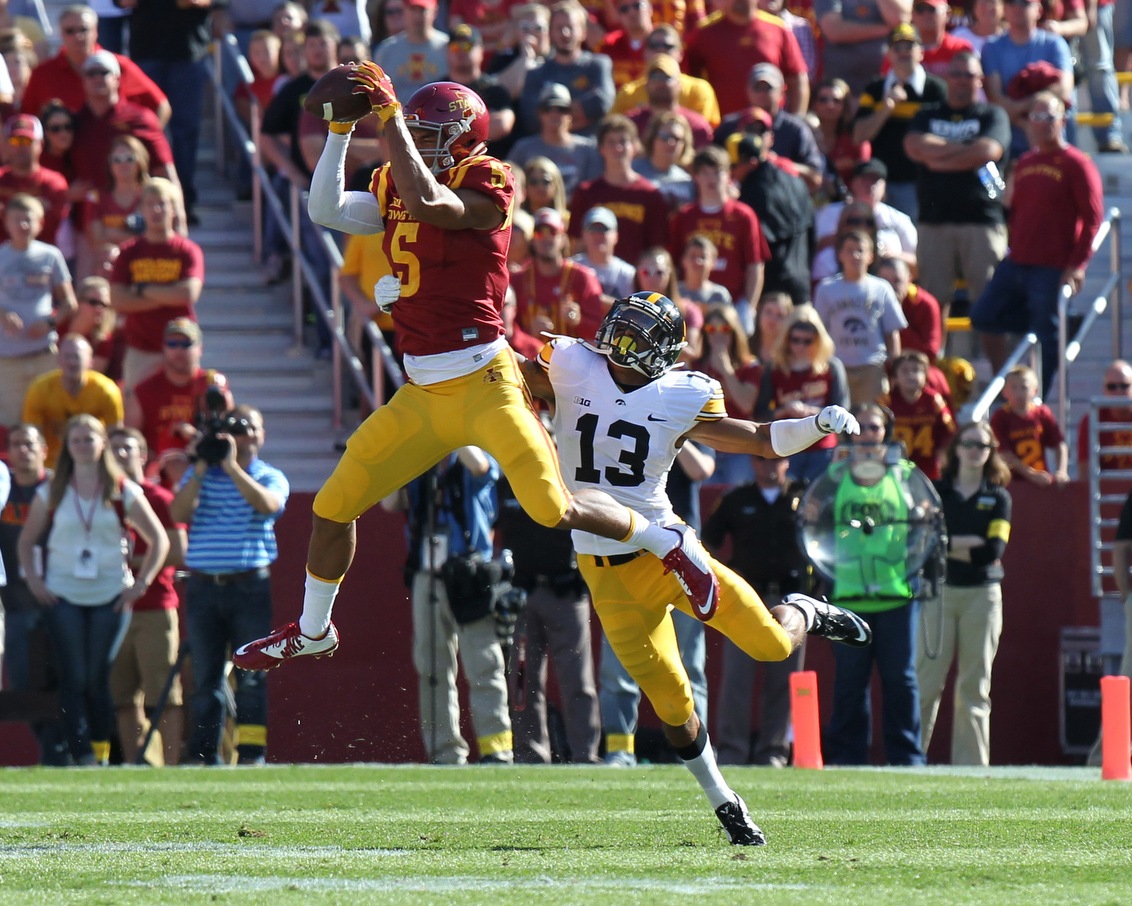 The video he’s been studying most since before the season started? Iowa’s.

And the player he’s obviously focusing upon? The Hawkeyes’ star cornerback, Desmond King.

The multi-talented Lazard must unseat King in this intense duel if the Cyclones — 15-point underdogs — are to win for the 10th time in the past 18 meetings against the No. 17 Hawks.

So what does the touted junior hone in on as he spotlights King in the film room?

“His weaknesses,” Lazard said. “What his tendencies are. How he likes to press. What his footwork’s like. How he defends each and every route. There’s a lot of stuff I can break down, but I’ve just got to be able to take what I see on film and be able to use it on Saturday.”

As for job one — discerning weaknesses …

“I haven’t got there yet,” Lazard said. “Still looking for it.”

King told reporters Tuesday that he and fellow corner Greg Mabin don’t usually shift around. He’s right side, Mabin mans the left. This week is different.

“Our corners don’t usually flip sides, but for this next game we will be playing matchups,” King said during Iowa’s game week availability, according to the program’s official Twitter account.

This also stands to reason.

He’s more than a security blanket. He’s a touchdown waiting to happen after each sure-handed touch, but he’s also seeking to beat King for his first six-point jaunt in three meetings against the Hawkeyes.

“I enjoy competition and he’s obviously one of the best corners in the country and probably the beat corner I’ll face all year,” said Lazard, who ranks seventh all-time at ISU in receiving yards with 1,530. “I’m excited to go against him. I’m excited for the competition.”

He’s a known commodity — and this time, the Hawks will try harder to neutralize his influence on the game’s outcome by making shadowing him constantly with King.

“He’s a great player,” ISU quarterback Joel Lanning said of King, the 2015 Jim Thorpe Award winner. “He obviously deserves what he’s earned, but just because he has that, you can’t be afraid to throw his way. Whether it’s Allen out there or someone else, if my read takes me out there, I have to be able to throw it that way. He’s going to make great plays. He’s expected to do that and I’m expecting my wide receivers to also make great plays, as well.

King’s an elite corner — snagging eight picks in 2015 while providing excellent run support for a corner. Lazard’s as strong and focused as they come, with a six-inch height advantage. So game on — and it’s the first Cy-Hawk night game at Kinnick since the Cyclones came back and stunned Iowa, 36-31, in 2002.

“It’s an opportunity that I definitely won’t take for granted,” Lazard said. “I’m going to enjoy every single moment of Saturday.”