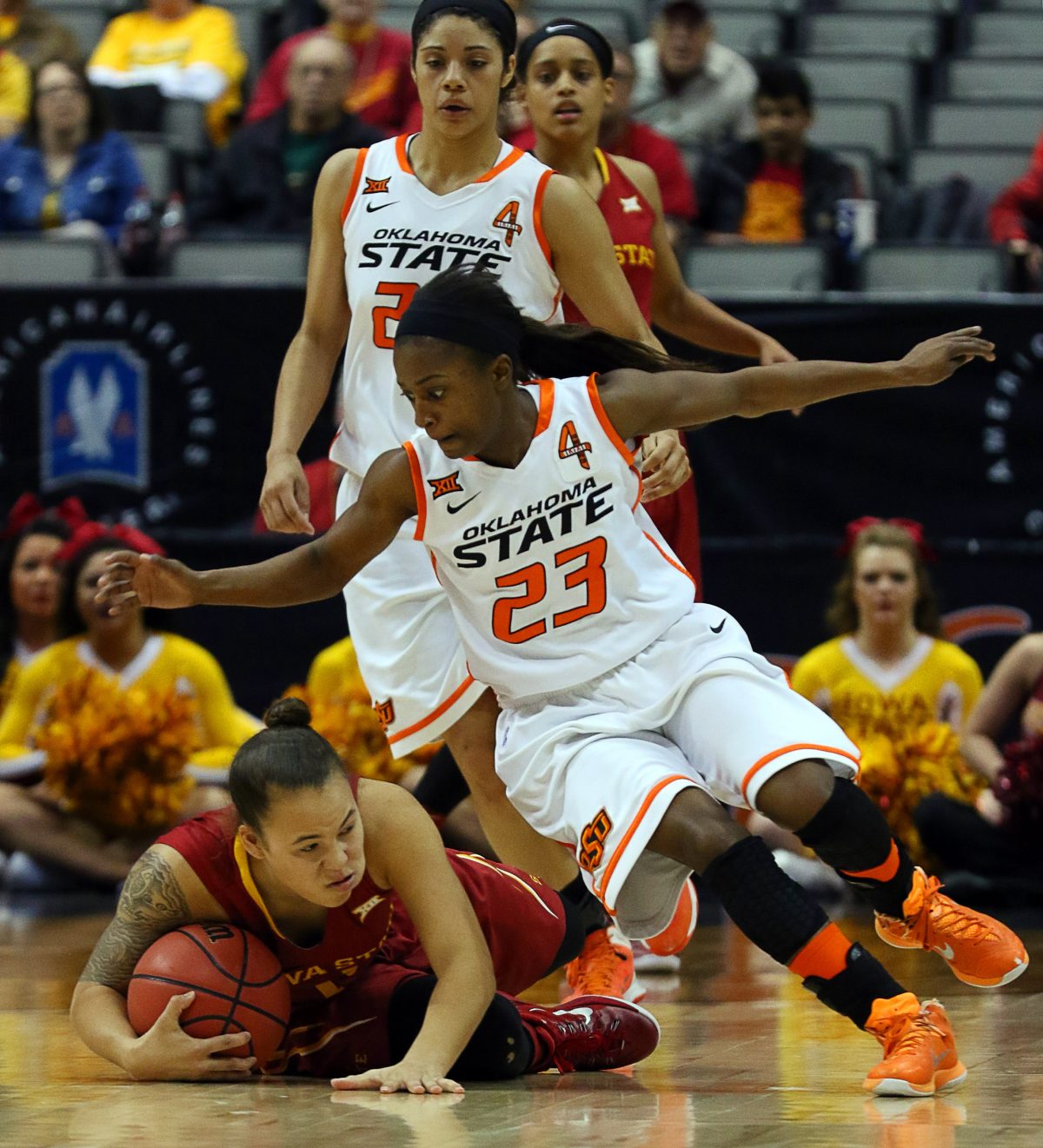 AMES — Kidd Blaskowsky knew she was in for a challenge when she arrived at Hilton Coliseum Saturday afternoon. Iowa State’s senior leader was tasked with guarding one of the Big 12’s best players, Oklahoma State’s Brittany Martin.

Martin entered the game averaging 24 points per game, but Blaskowsky was up to the challenge.

As a team, the Cyclones put together one of their best defensive performances of the season holding the Cowgirls 30 points below their season scoring average. OSU shot just 32 percent from the floor and 22 percent from 3-point range.

While the pace was slow at times, the Cyclones were energetic and quick with their rotations. They forced 17 turnovers and two shot clock violations. Good shots were nearly impossible to come by for OSU.

“We really wanted to make them try and score over the top of us,” Iowa State head coach Bill Fennelly said. “Obviously our focus was Brittany Martin, she’s just killed us every time she’s played us so we wanted to make sure we had a player and a half on her.”

Iowa State trailed 33-30 entering the fourth quarter before junior guard Seanna Johnson scored six straight points to give the Cyclones a three-point lead of their own.

Johnson scored nine of her 16 points during the final period. The Cyclones knocked down 11 of 13 free throws during the fourth, and 22 of 25 for the game. They outscored the Cowgirls 19-9.

Oklahoma State would never get any closer than three points.

“The way we were shooting from the field we just told our kids to really attack them, try and get some fouls, get to the free throw line,” Fennelly said. “I don’t know that I’ve ever coached in a game where we made 12 field goals and won.”

Oklahoma State’s defense was just as good Saturday afternoon, holding Iowa State to just 22 percent shooting from the field and 15 percent from behind the arc.

Freshman guard Bridget Carleton was the only other Cyclones to score in double-figures with 11 points. Johnson also grabbed 13 rebounds to notch her 23rd career double-double.

This time it was all about defense.

“You find a way or find an excuse, and we found a way to win today,” Fennelly said. “That’s as well prepared, well coached a team we face every year. Didn’t turn the ball over, made free throws and Kidd did a great job on Brittany Martin, and a great fourth quarter.”

What’s next for the Cyclones? A trip to Austin, Texas to take on the No. 5 Texas Longhorns Wednesday evening.

*** I don’t know what Coach Fennelly and his staff did to prepare this team defensively over the holiday break, but it was tremendous.

The Cyclones were flying around in their rotations more than they have all season long. Oklahoma State got some easy buckets early on against Iowa State’s chaser zone, but it didn’t take long for ISU to adjust.

I highly doubt Iowa State will hold many more teams to just 42 points this season, but if they keep up this defensive effort the Big 12 will need to be on lookout.

*** Saturday afternoon just further solidified how good Seanna Johnson is in my mind. She was shooting just 3-of-12 entering the fourth quarter before scoring the first six points of period.

Even though OSU’s length down low had bothered her time and time again, she continued to attack the basket without fear.

I’m starting to think she has ice water running through her veins.

*** The Cyclones had three recruits in the stands Saturday afternoon, including one player with some really big-time potential.

Kissinger is rated by ESPN as the No. 60 player in the class of 2017 and is considered one of the best shooters in the class. She also has offers from Nebraska, Iowa, Oklahoma State and quite a few others.

Safe to say, she would be a big get. It’s also safe to say she got the full Hilton Coliseum experience Saturday afternoon.