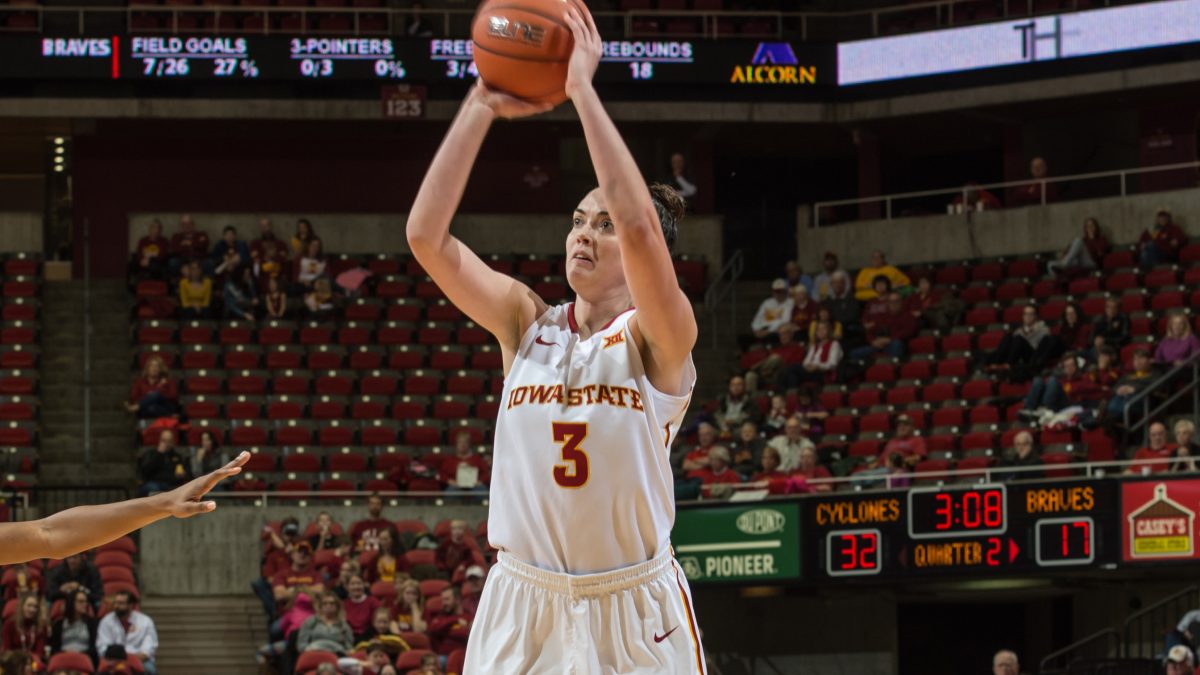 AMES —  When it was announced earlier this week that Iowa State freshman guard TeeTee Starks would miss the remainder of the season with a knee injury, the question for the Cyclones became who fills her role?

While Starks hadn’t exactly torn it up scoring the basketball, her impact was felt anytime she was on the floor. She was a hard rebounder, a tenacious defender and a playmaker on offense.

Sunday afternoon in a 91-41 win over Alcorn State, ISU took a step toward finding a way to fill the void left by Starks’ absence.

“That’s big minutes,” Iowa State sophomore guard Emily Durr said about the loss of Starks. “I just try to go in there and match her intensity and try to help my team any way I can.”

Durr played quite possibly her best game in an Iowa State uniform. She tied her career-high with 14 points, hit four 3-pointers and took over the role as ISU’s primary ball-handler when Jadda Buckley went to the bench.

She did everything she needed to in order to prove she can fill the void left by Starks.

“Emily showed us a lot more than she’s shown us,” Iowa State head coach Bill Fennelly said. “With TeeTee gone, that’s 22 minutes that we’ve got to find. A lot of those minutes are going to fall into Emily Durr’s lap. She made shots today, which was big. But the biggest thing was that she didn’t turn the ball over in 26 minutes.”

Durr’s 26 minutes were her highest of the season, and tied her career-high. This was one of her first opportunities to show what she could do during extended playing time. She ended up with a plus/minus of 62.

That’s good. She took advantage of her opportunity.

“I’m just trying to help Jadda,” Durr said. “She’s plays 35, 36 minutes a game and at point guard it can get really tough, especially bringing the ball up every time. So I’m just trying to get her a break, and get her rested up with Big 12 coming.”

With one question possibly answered, the new one becomes how does Durr follow up when Northern Arizona visits Hilton Coliseum Tuesday afternoon?

“It’s good to get my confidence back up,” Durr said. “I just need to slow down, see the court and play the game.”

– Four other Cyclones joined Durr in double-figures on the afternoon with Seanna Johnson, Meredith Burkhall and Bridget Carleton all scoring 14 points and Kidd Blaskowsky adding 12.

–  All 10 Cyclones that saw the floor scored.

– The Cyclones had one of their best afternoons at the free throw line this season shooting 21-23 for 91.3 percent.

– Johnson grabbed 10 rebounds to pick up her 21st career double-double and her eighth of the season.

– Bryanna Fernstrom finished with a career-high six blocks, the most by a Cyclone since Jocelyn Anderson in 2008. Burkhall added five of her own to give ISU 11 as a team.